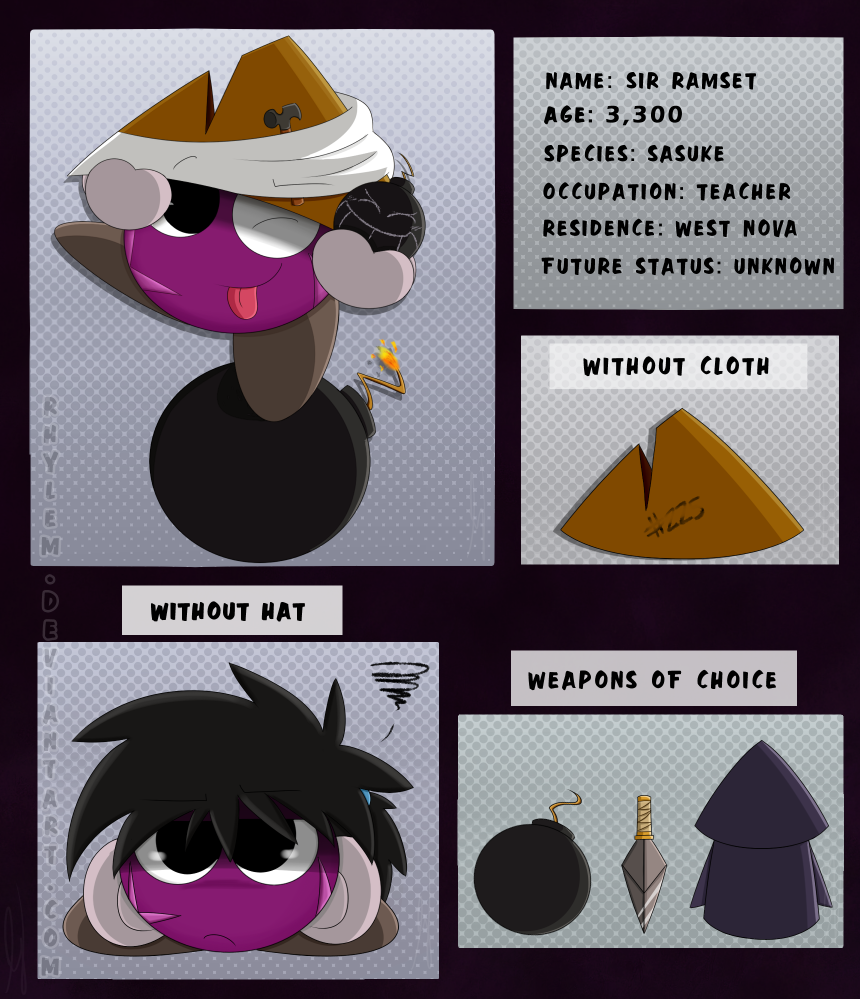 Weapon of Choice:
Bombs (Any type of explosives),and Knives

Skills:
Master of launching mass attacks at an enemy

Being bound to the building he worked at, plus being confined at the age of 1,300-1,800,
Ramset developed a phobia of closed spaces. Because of this, Ramset is unable to stay
inside a building or house for very long.

Ramset's speed is cut in half whenever he carries
his main weapon. (A giant rocket explosive) It's
very hard for him to keep up or dodge
attacks if he's holding it.

The major downfall to his attacks is rain or any type
of liquid substance. There's a 99.99% chance that it'll
burn out the fuse and render him useless.

Ramset's biggest weakness. Ram keeps it a secret, and isn't
planning on telling anyone. As of today, no one knows what
it is...or even knows he has said problem, aside from
Gravel.


Ramset gets very agitated if anyone tries to take his hat.
He ended up developing a clinging problem because of it.

Sir Ramset has never set foot outside while he was growing up in
Central Crux. He, and dozens of other Sasukes, were kept inside
in one of Central Crux's main factories and taught how to make
explosives for the war. Whenever he had free time, Ramset would
always venture throughout the hundreds of rooms in the building.
At the age of 1,300, he found the greatest thing in the entire universe!!!

A photo book filled with landscapes.

Convinced there was a better world outside the factory
walls, Ramset planned to break out and flee Central Crux.

Unfortunately, he wasn't so lucky and was quickly detained. As punishment,
he was put under strict surveillance and was not allowed to venture off like
he used too. When he turned 1,800, Ramset finally decided he had enough
and planned another break out. One night, he snuck out and headed to the
main storage room that held all the explosives waiting to be shipped.
He searched for the biggest bomb in the room and lit it. Ramset never
saw his coworkers or Central Crux again.

Ramset spent a few years traveling all over the 4 lands of Nova. At the age
of 2,200, he finally picked his new home in Kalmari Town, West Nova. Ram
still loves to make explosives and was persuaded by the other teachers
to use it to help future students raise their evasion.

Ramset has a carefree personality and loves to bug the heck out of his
friends...which is slightly odd because he gets easily irritated when others
bother or bug him. When he's alone, Ram likes to relax and enjoy the different
scenery Kalmari town has to offer. Ramset never really had any verbal conversations
as a child, so his words can come off a bit blunt and sometimes rude. He could care less
if someone is offended about it because he wants to be as truthful as possible to
those around him. Because he's been kept indoors for a small chunk of his life,
Ramset prefers to live and sleep outside- he is usually found sleeping in the forest.

Believe it or not, Ramset is the kindest out of the four teachers.
His teaching techniques may be insanely difficult, but he will always
intervene if any of his students are on the verge of getting injured. The
only time he'll lose his temper is if anyone of his students slack off and
do not take his lessons seriously.

Gravel was the first critter Ramset ran into when he entered West Nova.
He could never figure out why the Bukiset acts flustered around him, but
he finds it very interesting and hangs around him because of it. (and because
he likes seeing his mask glow) Ramset hates to call him by his full name,
and instead, calls him by his species name or 'Grav.'

Though he's one of Ramset's good friends, the Sasuke loves
to pull pranks and harass the elder. (Usually calling him crude
nicknames, or drawing on his mask.) He does hold great respect
for the Bate, but shows it in a rude,
mischievous way.

Ramset did not have good relations with Gordon at first. Gordon was on
the verge of killing him during the confrontation with Bate. He threatened
to kill Ramset if he ever got near him or Bate again. Eventually, with Bate's
help, both became (somewhat) friends. As years passed, Gordon put the
incident behind him and now shares a strong friendship with Ram. The
only time they're usually seen together is when Bate's around, or
when they're out drinking.


Ramset decided to take the pair under his wing and show them
everything he knows. Both warriors share a friendly relationship
with their teacher, and even spends time with him off-class.
Unfortunately Ramsets, crude, humorous personality will end
up rubbing off of one of his students in the late future.


Other:
-He likes to draw on his weapons,
but erases them before they're in use.

-He has an impulse to randomly cling
on to his hat throughout the day.

-He has a long, black ponytail
hidden underneath his hat.

-The reason he has a hammer strapped to
his hat is to balance the other end
that's ripped.

-He was illiterate as a child all the way up to
a young adult. Bate, Gordon and Gravel taught
him how to read and write.

-Ramset has two scars. One caused by a guard
in Central Crux and the other by a demon beast
that Gravel eventually killed off for causing it.