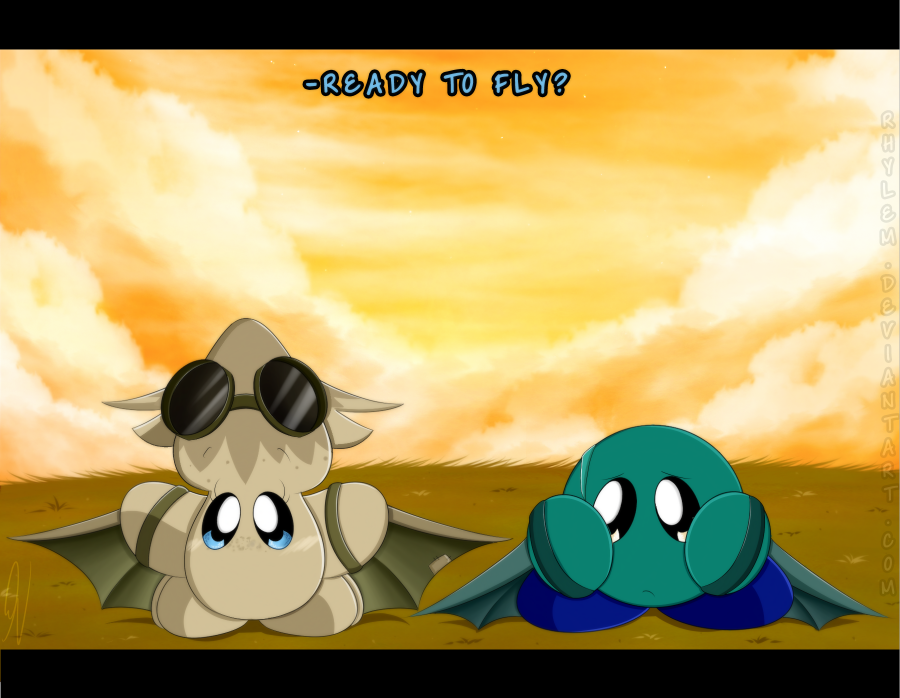 Nonsurat’s heart was racing. He eyed the hand crafted wings they both made earlier that day and slightly glanced back at Marlo.

“A-are you sure this is going to work?” He timidly flapped his wings to try to lift himself off the ground. When nothing happened, his mind started to have second thoughts.

“Oh, of course it will!” She chirped, “Operation- 'Help Nonsurat fly again’ is sure to be a success!”

The little Puff peeked over the cliff and felt lightheaded from the staggering view below. At this point he started to regret the idea of ever making wings in the first place.

“I…ummmm….” He started to back away from the cliff. “On second thought, I don’t think this is a good-“

Before Nonsurat could finish, Marlo grabbed his hand and jumped off the cliff. Screams of terror from the Puffball could be heard soon after.

“Hey, Bate?” Gordon cautiously eyed Nonsurat and Marlo playing near the edge of the hill in front of them.

“Hm? What is it?" The elder looked away from the book he was reading and glanced at the Gordo.

Gordon pointed to the two. Something wasn’t sitting well with him when he saw the wings strapped onto their arms. “You…don’t think they intend to try to fly with those, do you?”

Bate looked at the pair and gave a huff at his friend. “Gordon, they’re just playing. They wouldn't do something as stupid as jump off a cliff.”

“I guess…” Gordon faced the ledge again and noticed Marlo dashing towards the end.  “Or maybe not! BATE!!”

Bate’s blood ran cold when he looked back up and saw the two jump off the edge. Bate quickly kicked his feet off the trunk of the tree he was leaning on to boost his momentum as he stretched his wings to take off. The elder sped to where they jumped and nosedived to the pair who was about to hit the rocks surrounding the ocean below.


“Awww…Mr. Bate,” Marlo wined in the secure arm’s of the elder, trying her best to wiggle free. “We didn’t even have a chance to see if they worked yet.”
​

Oh, Marlo…you little rascal. I think you almost gave Bate and Gordon a heart attack with that stunt. ;o;