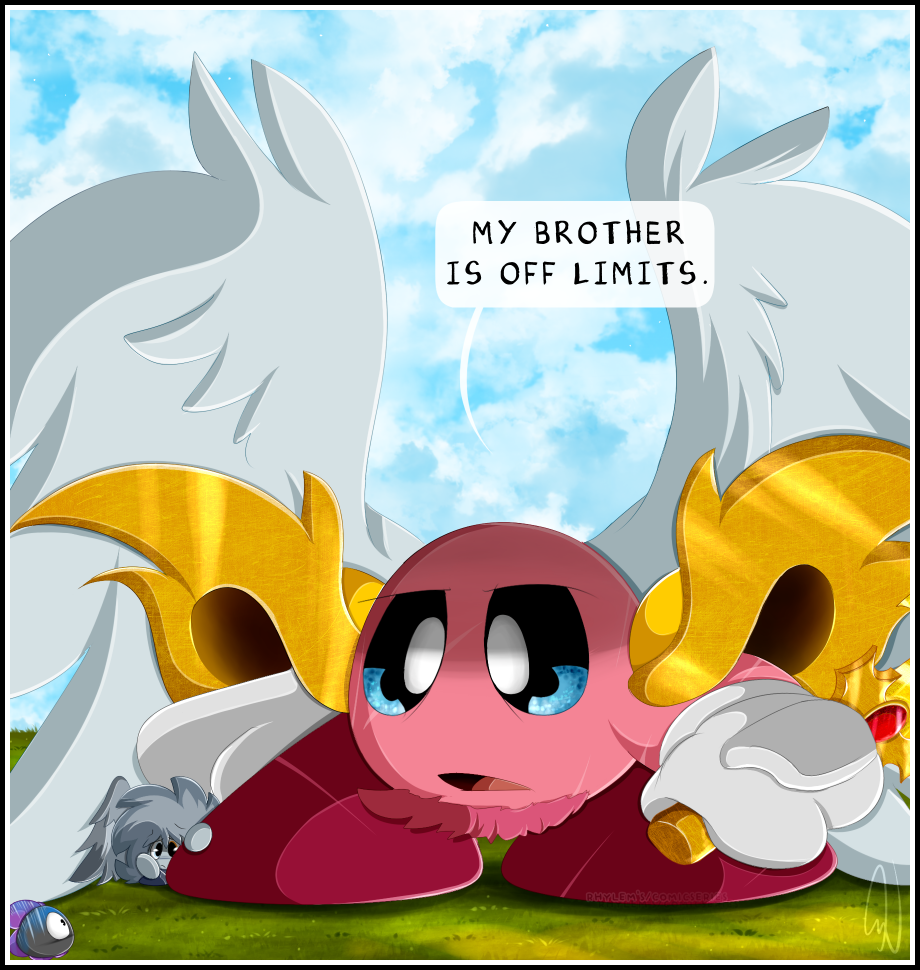 It took both parents some time to adjust to, Kes arguably a lot more than Meta. Pop Star has its fair share of troubles, sure - what planet doesn't? - but it's a lot more at ease than their homelands and, admittedly, a bit unnerving.

Still, it's certainly not a bad thing. When their little son, Tulok, is old enough to walk, old enough to run, it gives them some leeway in allowing him free reign of the forests and fields.

Tulok, their little ice cube, has been a long time coming in starting to regulate his temperature. The poor thing could barely keep himself warm as a babe, always needing that incubator and only allowed certain intervals of time to roam before going back in. Now, he's finally starting to do quite well for himself. It's a nice day out, not too warm, not too cold, and the plants are blooming and full of greenery... They both wanted to give him a chance to feel the outside for himself, on his own.

"So, how about a picnic?" Is what Meta suggests, and it sounds like a great idea to Kes. Somewhere nice and peaceful to hang out and watch their son roam.

So that's what they plan on doing. Of course, Tulok the energetic little thing is already begging them to let him go on ahead. Full of the lisping and babbling of his young age, he points toward the door and hops, begging for them to let him go play as well as he can. Kes isn't too certain, but. Pop Star is peaceful. More peaceful than back home, and the weather is nice. They won't be long in following him...

Tulok probably doesn't listen. Squealing, he's off like a little blue blur, tiny wings fluttering on behind him as he scrambles out the door and into the sunshine, darting onto the well worn path leading into the forest of the park. Happy, excited, ignorant of the little dark blot in the scenery that takes off after him.


For Kirby, it's a pretty normal day. Patrol the fields, make sure all is well and there's no weird threat trying to take the poor star by storm. For such a peaceful place, it certainly has had its odd fair share of threats, which is the primary reason he's started patrolling in the first place. Nip it in the bud before it gets out of hand, right?

But today is like any other. Calm, cool, relaxed. It's more of a leisure stroll for him than anything, walking along and occasionally spreading his wings for a nice glide or two when he's bored of using his feet. It's nice to see that Pop Star is flourishing so well for the season this year! Maybe he can invite his family to the ocean when Tulok is able to handle it. He doesn't think his little brother's actually felt water on him outside of a bath...

It's as he's flying that he feels it. A presence, not unlike Gooey but different, darker, reeking of sludge and malintent, and he knows immediately that a Dark Matter is in the area. This isn't a very big deal, usually. Most of them tend to be small, nuisances more than anything. He can deal with it no problem.

But when he takes himself over to the forested trees of the park not far from his vicinity, sees the Dark Matter and his /brother,/ sitting in a swing completely unaware. Well.

Even the greatest warriors can turn into their own Demon Beasts sometimes.


Tulok, for his part, doesn't get why his brother lands right in front of him. Wings spread wide, large enough to engulf him which they had several times before when Tulok was curious enough to go climbing or playing hide and seek, and a big frown on Kirby's face that makes the boy squirm although he doesn't feel like he's in trouble.

Kirby steps forward and in front and Tulok hugs closer just on impulse, sticking behind his leg where a great wing curls close protectively. And Kirby speaks, voice grating, calm but deathly so. Sword drawn and hanging deceptively loose in his grip.

"My brother is off limits."

The Dark Matter /is/ a pipsqueak. It knows what it can handle and what it can't.

The great Star Warrior Kirby and the legendary sword Galaxia hanging at his side is something it /cannot/ handle.

For a moment, they both stare. Neither moving, although Kirby thinks it's terror that has the Dark Matter rooted to the spot, by the way it seems frozen in place. Good.

"Get." Galaxia twitches in his grip and the Dark Matter is just, gone, between one second and the next, without a sound. Kirby stands in place, Tulok still tucked close, waiting for the Dark Matter's presence in his mind to fade with distance before he allows himself to take a great breath and relax. Geez. Of all the times to almost have a heart attack...

He turns down to look at his little brother, the tyke staring wide-eyed up at him in curiosity and very pointedly alone. Where are their parents. "Hey there, squirt! What are you doing way out here? Sneak away from mom and pop?"

"That.. Well, it's called a Dark Matter." Kirby clicks his tongue, trying to find a way to phrase it for a toddler to understand. Tulok is smart, but. Still a kid. "You know those stories about Demon Beasts you hear at night? Or those stories about how your big brother saves Pop Star from bad things?" At Tulok's nod, he continues, "Well, Dark Matter is like that. Bad. Evil, which is /really/ bad."

"Uhh. Sure, let's go with that. Us Star Warriors, like me and dad, we're meant to fight them. That's our purpose. But--" Because he can see Tulok starting to get unnerved, even scared now that he realizes, and the wing surrounding him hugs him closer almost hastily. Hadn't meant to spook him- "But hey, listen. Don't worry, okay? Your big brother Kirby is always gonna be here to protect you! He's the greatest warrior in the universe, you know! He can handle anything! No measly Dark Matter with ever hurt you, I promise."

As Kirby puts Galaxia away, he can see the tiny cogs turning in Tulok's mind, and it's both cute and kind of impressive the way he's managing to absorb the information. At least he doesn't look scared now...

"Come on, let's play a game! You out here all by yourself must be boring! Where's the parents, huh? Bit early in age to start ditching!"

"Ahh. Well, let's do something fun until they get here! Bet you I could spook them when they come over~!"

It's not often that Kirby has the time to spend on leisure activities, and even as little as tulok is the boy knows it. He's excited, hopping on his tiny feet and face beaming so hard Kirby probably could have gone blind right then. Some part of him feels bad for it. He really needs to carve out a bit more time with his family...

And Tulok is off, running back towards the swing and squealing for Kirby to follow and push him. It's nice, he thinks, that kids are so easy to forget things. It's like the incident with the Dark Matter didn't even happen.

I've been wanting to post more about TS Kirby, so here's a cute little fic of him protecting his little brother against a rogue Dark Matter! Kirby is not one to be messed with, he's considered the strongest Star Warrior aside from the Legendary Three.

I have a personal headcanon that Kirby is VERY sensitive to his surroundings. He's able to pick up the faintest presence of Demon Beasts (especially Dark Matter) He just didn't expect his little bro was going to be target of one today. I'd hate to be that Dark Matter, yikes! oAo Kirby would shred him in less than a second...Sliced Matter? Diced Matter? XDD


The one-shot for this illustration was from an Art Trade I did with my good friend, Dogblog. (dA- Shadowrealmprincess)
Species © Nintendo/ HAL Laboratory
Interpreted characters created from said species © Rhylem