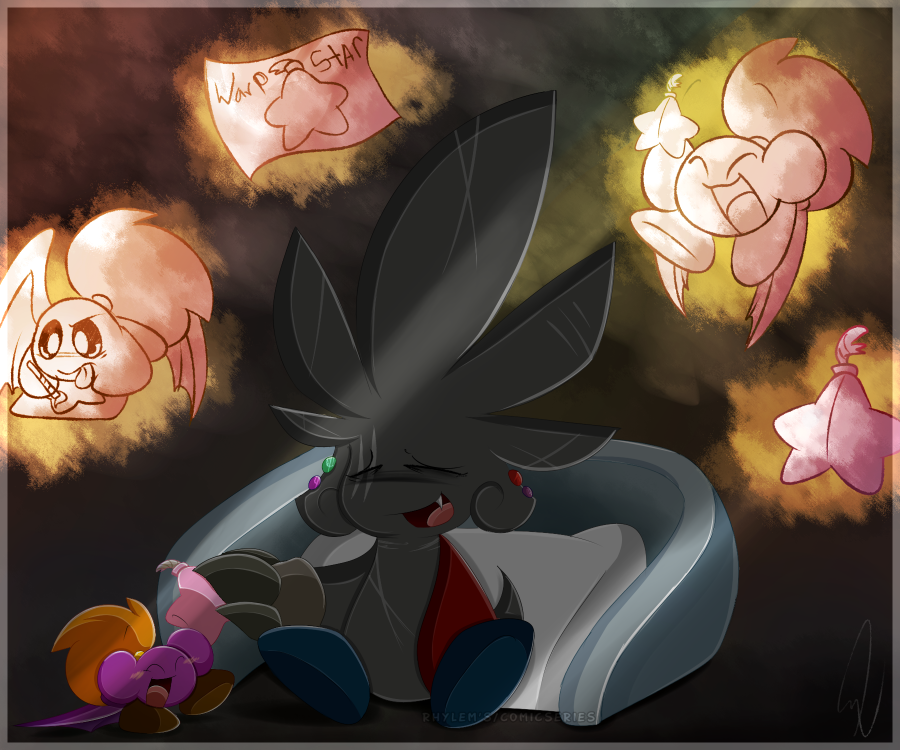 “Teacher Gravel~!!” Dragato called out as he entered the hospital room.

The room is dark except for a small glimmer of light peeking from one of the curtains. Gravel finally woke from his long hibernation a few days back, and he was taken to Kalmari Hospital for a small checkup to make sure he's doing well after several months of rest. Ramset informed he and Falspar during their first visit yesterday that it takes a bit for Gravel to get back on his feet. He’s unable to move well, and his eyesight is very sensitive. It usually takes him a week or so for his body to fully function again. In the mean time, his room is left in the dark so his eye won't sustain any damage.

The small warrior made his way further in when he caught a glimpse of his mentor’s frills when the curtains shifted slightly. He called out once more, before finally getting a response.

“Dragato,” A small yawn followed soon after. “I didn’t expect you to visit again so soon, hasn’t it only been an hour or so?”

“An hour? It’s been a whole day, Teacher Gravel!” He exclaimed, toddling to the elder, and embraced him once he made contact. He looked up and noticed his eyes were still closed. He still isn’t able to properly see yet, so Dragato reached for his hand to place something in it.

“I wanted to show you one of the fireworks Teacher Ramset helped me make while you were hibernating!!”

His claws gently tapped the object a few times before his paw covered the item he was holding; several of his frills perked when he realized what it was shaped as.

“Feels like a Star, if I had to make a guess.” He said, giving a small smile.

“That’s 'cause it is!!” He beamed, and began filling him in on everything he missed that day.  “Teacher Ramset finally let us make our own, and I wanted to base it off of my Warp Star!” He said. “He gave us each a piece of paper to draw our design on it. Oh! He also taught us how fireworks get their colors, and the different types of fireworks he's able to make! "

"Sounds like class has been quite exciting for the two of you."

"It has!" He smiled.  "Once I was done with the drawing, he showed us how to make them. Ah…but he didn’t let us touch anything. He said we have to wait until we’re older.”

“I’d image Bate would give him a hard time if he let you. Those fireworks of his aren’t toys.” He then handed him back the item. “And Falspar? What did he make?"

“He wants it to be a surprise when you’re able to see again.” He explained. “Then we can light them, and watch it together. We’ve been waiting months to do it! ”

Gravel slightly tensed up. So all this time they waited for him to wake up so he could take part of the celebration too?

“Ah- thank you, Dragato. It shouldn’t be long now. I’ll be up and back to normal in no time."

“It’s fine, Teacher Gravel. It’s difficult for Teacher Ramset to get up only after a few hours of sleep. You’ve been resting for several whole months! He said it can take days or sometimes weeks for you to feel better. We don’t mind waiting.”

Just hearing his student say that made him determined to get well as quickly as possible. He’s missed out on so much, and he can’t wait to get back and start teaching them again. He tried to open his eye to get a glimpse of his student, but couldn’t after several seconds of struggling. He ending up covering his eye in pain, and reassured his student when he started to panic.

“Sir Gravel, I insist you refrain from doing that unless you want to prolong your stay here.” Alba’s voice called out to the Bukiset. She closed the door behind him and greeted the pair when she got close enough. “1 week, I said. It’s only been 2 days. Don’t damage the only eye you have left, you’ll be able to see your family soon enough.”

"Y-yes. I'm sorry, Alba, I won't do it again." Gravel gave small nod. Alba's been helping him ever since the Candlemander incident, so upsetting the only nurse who goes out of her way for him isn't a wise thing to do.

"Very well, then." She nodded back and then turned to Dragato. The small warrior inched close to Gravel and gave her a nervous smile in return. He had a feeling she knew where he'd be.

"And Dragato- you just can't run off during your checkup. Ramset said he'd take you to see Gravel ONCE you were done. Not in-between." She motioned him to follow her back to his room. "We're almost done, so say goodbye to your mentor for now."

"Awww, okay...." He sadly got up from his spot next to the Bukiset and gave him a hug goodbye. "Bye, Teacher Gravel."

"Goodbye Dragato. And thank you for the visit." He hugged him back. "But no more running off, alright?"

"I won't." He said as he walked to Alba. He watched Gravel give him a small smile and wave before settling back in his chair to rest once more. Once the door behind him closed, he and Alba started to walk back to his room.

"I'm assuming Ramset let you go. Last time he formed an entire search party with my staff when you wandered off without his knowing."

"Kalmari Hospital is the best hospital in all of West Nova- he's in very good hands, trust me." She giggled. Sweet Nova, those kids are always protective over their mentors. "Gravel will be up on his feet by the end of next week. Then you can finally light the fireworks you've been saving for him. That'll be quite exciting, won't it?"

"Hm!! Falspar and I have been waiting for a super long time! We can't wait to-"

Dragato paused for a brief moment when he realized what she said. Ramset (and Gravel) are the only ones who know about their plan to light it after he woke up from hibernation. He shyly glanced up at the elder squid. Was she listening to their conversation?  They briefly locked eyes for a moment before she gave him a small wink.

"If I can let Meta stay with Bate for hours on end,  I don't mind giving you a few minutes to talk to your mentor." She said. "The bond each one of you warriors share with your teachers are strong. They're quite lucky to have you."

Dragato gave a cheeky smile to her statement as they finally reached his room to finish his checkup. Ramset greeted the pair once they entered, and Dragato lunged at the Sasuke for a hug.

Small little floofy literature piece of Gravel~!! ^o^ So I have a headcanon that his body and eyesight are very weak and sensitive once he wakes up. It takes a few days for him to recover from it, but Dragato and Falspar are as eager as ever to see him~!! This time, we're focusing on Dragato. He had to get a small checkup with Alba, but ends up sneaking out real quick to see Gravel when she stepped out! He wanted to show him one of the fireworks he and Ramset made while he was hibernating. Although Gravel can't see, Dragato does a good job telling his story~ It almost feels like Gravel was right there with all of them~! >v<

Alba knows Dragato went to see Gravel, but waited outside to let them talk until she heard Dragato starting to panic when Gravel tried to open his eye. It was time for her to step in. She promises to let him visit Gravel again ONCE he's done with his checkup. Seeing all of the warriors being super protective over their respective mentor couldn't help but make her smile. >v<
Species © Nintendo/ HAL Laboratory
Interpreted characters created from said species © Rhylem