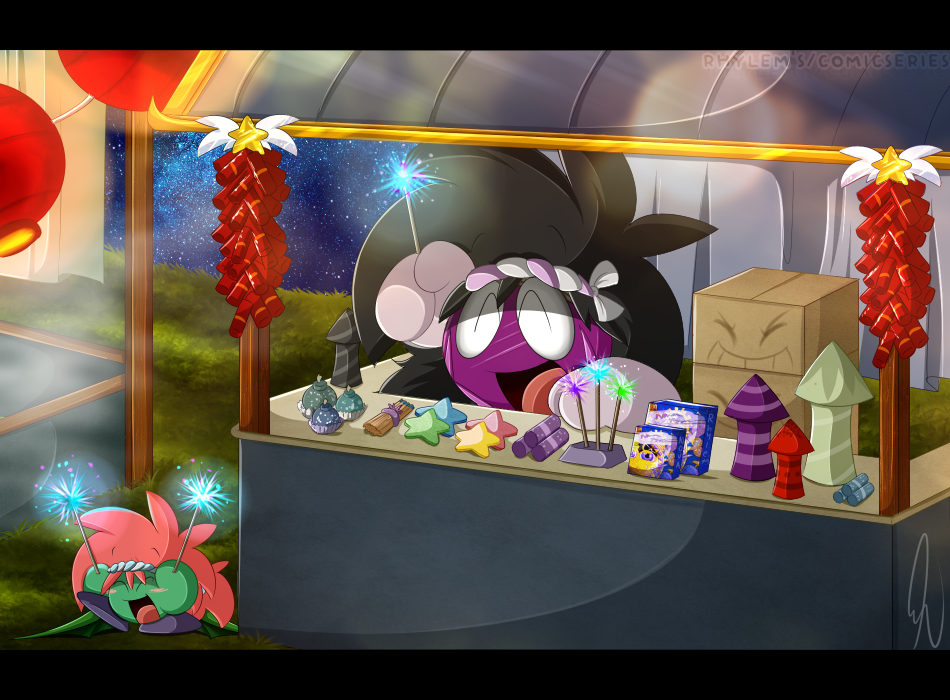 ​
"Thanks for all your help, Bate." Ramset spoke as he began tying down the mountain of boxes to the old, wooden wagon.

"Of course, anything to get you out of Kalmari faster." Bate joked as he kept a firm grip of them with his talon wings. When he felt them safely secured, Bate released his grasp, and headed towards the Sasuke who was dusting himself off.

"Whoooo!!!! I'm officially ready for the festival!" Ramset happily pumped his fists in the air.

The elder playfully rolled his eyes from his childish behavior, and started to head away from the tower of explosives. "I'm sure it'll be great. Is Falspar done packing as well?" He asked since he was the only one attending.

"Yup! I made sure he packed last night. He's off sleeping since he wants to be well rested for tonight."

"Yeah, but there's still gonna be some celebrating. Not to mention he loves taking an early peek, and talking to all the other booth attendees. Last year, he even drew a map of all the stands he wanted to visit, so he'll be pretty busy even though it's prep day."

Bate couldn't help but crack a smile from his response. It was probably one of the few times where Ramset and Falspar got to bond over something they both really enjoyed. As much a Dragato loves explosives, he wasn't as fond of spending the whole week away from Kalmari celebrating and partying throughout the night like the pair. He remembered having to take the trek several towns away a few years back just to pick up the other Puffs because they weren't enjoying it. The celebration certainly wasn't meant for everyone, which is why he never attends it, but it was nice those two could share a memorable teacher, student moment each year.
​​​​​​Artist Comment:

Unlike the other celebrations, this is a festival only Ramset and Falspar attends. The little warrior tags along since he loves helping his mentor sell his fireworks, AND he get's to celebrate and party all night long! The other booth owners absolutely adore him, and are quite impressed by his boisterous spirit~ It last for a week, so it can be a bit tiring for some. (Which is why the other Puffs didn't quite enjoy it like Falspar.) Then again, it's not for everyone- it takes a different kind to be part of this special, 7 day celebration. x)