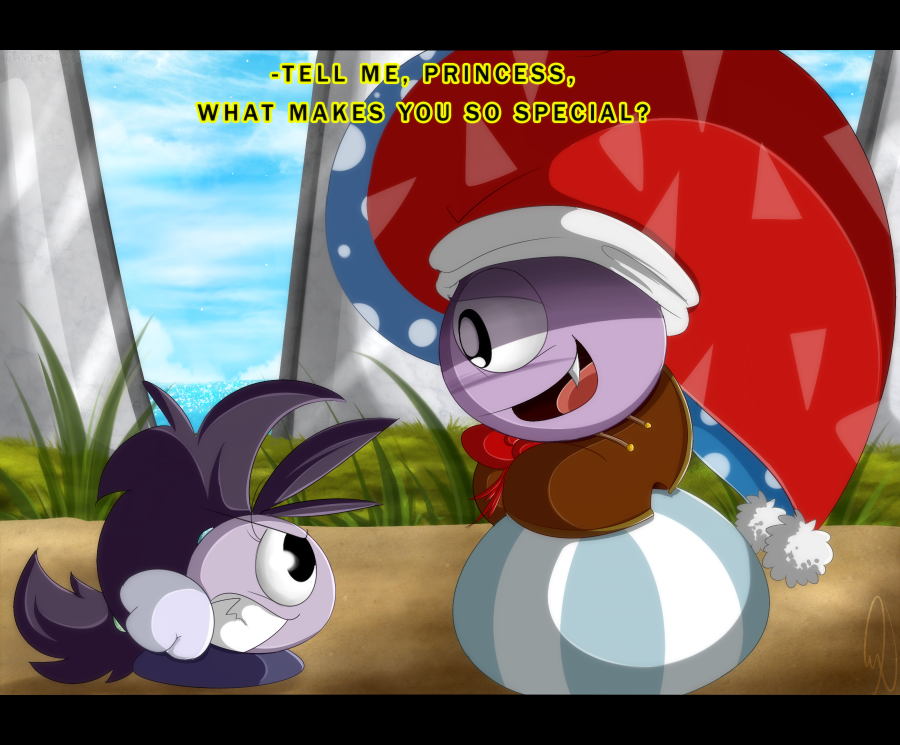 Happily bouncing on his beach ball, he gave the group a mischievous smile as he hopped off to greet them. Kirby’s wings slightly lowered when Marx approached them.

“O-oh…these are my cousins.” The Pink Puff shyly spoke, “I…told you they're visiting a few days back, remember?”

“Heh, must’ve slipped my mind.” He shrugged. He could only take so much stories about his teacher, grandfather, and family. Tuning him out is the only way to deal with him at times. Marx carelessly shoved Kirby away to greet them. “I’m sure Kirby told you three everything about me, didn’t he? It’s nice to meet.....-“

He quickly paused as looked at the little Gordo in the back of the group. He couldn’t help but begin snickering from its appearance. “Tch- what are you supposed to be? Geeze you look weird, you’re actually related to Kirby?”

Atticus, Tula, and Kirby glanced at the now embarrassed Gordo before Tula stepped in. “Of course he is! Why wouldn’t he be?”

“Relax, princess, I wasn’t talking to you.” He sneered and now focused on the Leo. “And you. A burning Leo, correct? Have you burned any towns down with that fire of yours yet?” He joked.

Atticus didn’t speak a word and just inched back to Cellic. Marx raised a brow from his reaction and decided to move to the last one. She didn’t seem as welcoming as the rest, and Marx thought it would be funny to exploit it.

“And last but not least, the chatter box.” He grinned.

“My name is Tula.” She spoke with a less than amused voice. “And for your information Atticus can’t use his fire.”

“Huh? A burning Leo who can’t use his fire?” He questioned. “You’re joking, right?”

When he didn’t get a response from the group, the jester busted out laughing. “C’mon, there’s no way that’s true. So let me get this straight. We got a floating snowflake, a Leo who can’t use his fire, and…and…you. A talking purple grape. Aw, man.” He lightly nudged Kirby. “Looks like you got off lucky, Kirb, you didn’t turn out a loser like these guys."

While Cellic and Atticus preferred to stay out of it, Tula wasn’t so accepting towards his harsh words. “We’re not losers, take that back!”

“Oh?” Marx perched himself back on his beach ball and towered over the little Sasuke. “Tell me, princess, what makes you so special?”

She took a step forward to challenge his words. “I can do a lot more than just run my mouth, so apologize to Atticus and Cellic before I make you regret it.”

Even though she tried to follow the morals instilled to her by her parents, she wasn’t going to sit by while her family was being picked on. Of course, she knows never to use her fire for something so petty, so talking big was probably as far as she’ll go for someone like him.

Marx looked below and continued to glare at the Sasuke before he rolled his eyes in annoyance. “Your cousins are so sensitive. Let’s go, Kirby, we got better things to do.”
​​​​​​Artist Comment: