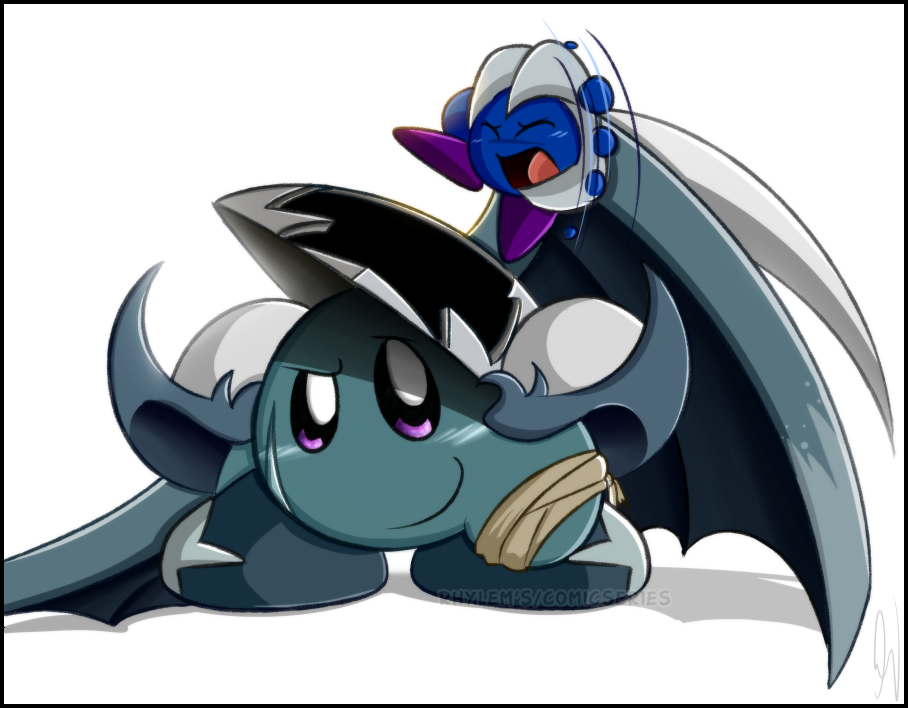 Kade / Meta
"Well, Sir Bate, it seems like you're taking the day off work tomorrow."

Ellie spoke as she pulled the thermometer from Bate's mouth. Emma and Kade watched from the side as Bate refused to accept such a thing.

"D-dear, I'm fine." He spoke in between several fits of coughs. "Let me just rest for today and-"

The warrior quickly stopped when he saw the unamused expression of his wife, and settled back in bed. "Or....maybe I'll take the day off." He corrected.

"Good." Ellie smiled, playfully patting his head and heading out of the room so her husband could rest. Emma and Kade entered soon after to talk to him.

"How are you feeling?" Kade asked.

"Well, it could be worse. I'm sure I'll be back on my feet in a few days." He slumped back in bed and tiredly closed his eyes.  "Kade, could you do me a favor and please inform Meta and the others that class is canceled until I'm well again?"

"Canceled?" Kade repeated while Emma gave her brother a concerning glance when she heard the sudden shift in his voice. It the midst of recovering, it seemed like their dad was unable to catch on, so it was up to her to figure it out.

The young Puff gave a chipper nod to his father and hastily ran out to inform them. "Oh, don't worry! I'll get on it right now! I'll be back soon, get well!"

​"I...ah, should help him." Emma quickly piped in and gave her father a small peck on the cheek before running out as well. "We'll be back soon! Love you!"

It didn't take long for Emma to finally catch on what her bother was up to when she saw him grabbing his armor. She leaned against the frame of their doorway and watched as he began polishing it. She took a few steps in and gave a rather loud cough to catch her attention. "What are you doing?"

Kade strapped his pauldrons on and grabbed his mask hanging from the wall. He struck a pose, and looked at his sister for her approval. "What do you think? Pretty convincing huh?"

"Convincing to whom, exactly? She crossed her arms. "Dad's not going to be happy if you don't do what he says."

"Relax, Emma, I know what I'm doing." He smugly stated and headed out of the room. "Besides, dad trained me when I was around their age. I know everything he does, it'll be a piece of cake!"

"Except for the part when one of them ends up getting hurt." She pointed out. "You know how rambunctious those kids are. What if one of them collides with a tree or something?"

"They're not gonna, because you'll be keeping an eye on them as well!" He smiled and grabbed her arm. "C'mon, it'll be fun!"

"H-hey! Wait a minute! Don't drag me into this!" She yelped as she tried to escape his grip. Shaking her head, she knew it was already too late. Stubbornness was a strong trait her brother had, and the Squid could only give a deep sign from his boneheaded idea. Surly this wasn't going to turn out they way he envisioned.


With his newly polished armor and a determined grin, Kade sightly lifted up his mask to get a better look at the 5 warriors he was temporarily teaching. Emma, who was besides the Puff, didn't speak a word as she watched her brother greet the group.

“Yo-“ He gave a small salute to the group, “The name’s Kade. I’m currently filling in for my dad, so for the next few days, I’m going to be your instructor.”

“We already know who you are,” The little Navy Puff interrupted to Kade's misfortune. “Quit pretending to be like Teacher."

“That’s Teacher Kade or Sir Kade to you,” He corrected and picked him up with his wing to quiet him, “Don’t think my dad didn’t warn me about you, pipsqueak.”

“Eeeeh?!! What are you talking about?!! You know me, we grew up together!"

"Kade, put him down and quit fooling around." Emma intervened, slugging him on his shoulder. "Just tell them that Dad's out s-"

"A-ahhh! Please, don't mind Emma." Kade quickly cut her off and used his other wing to block her. "She's just the new teacher's assistant! It's nothing too major."

"Assistant?" her brow furrowed from his remark.

"Yes, assistant." He hushed so the others wouldn't here. "Just let me teach for today, alright? Nothing will happen, I promise."

She mumbled and turned away, not wanting to be part of it. "Fine, but I'm not part of this."

Giving a nod, Kade smiled at the group and began. "Okay! Ah, now where was I....." He rambled. "Ah, yes! I'll be teaching you guys for the next several days! So for starters, how about we head over to-"

"Kade, that's enough." A voice called out. The younger sibling flinched when he recognized who it was. Sweet Nova, how could the timing get any worse. Gently setting the Puff back on the floor, Kade hung his shoulders in embarrassment as he faced his father.

"D-dad? W-what a surprise. I...I thought you were resting." He choked when the elder loomed over.

"I was, but then I was informed by your mother of your little...detour." Bate glanced at the 5 and then back at his son. "Didn't I tell you to cancel class for today?"

"Uh-huh." Bate dryly spoke and pointed in the other direction. Kade's heart couldn't help but sink when he heard the following words his father spoke.