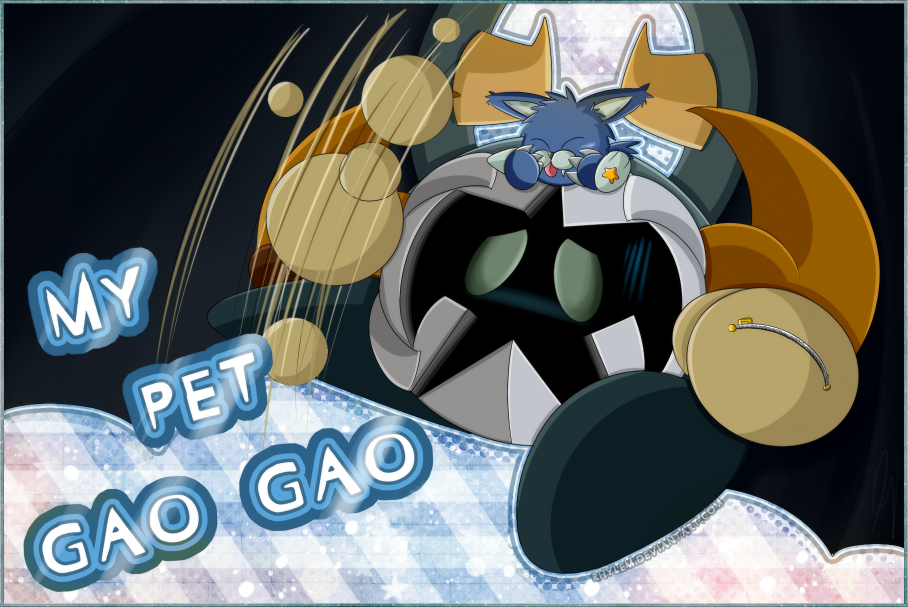 Meta finds a baby Gao Gao in Kalmari Forest and takes him to Bate to see if he could keep it as a pet. The little Gao Gao was quite fond of Bate when they meet and quickly bonded with the elder. Unfortunately, Bate started sneezing and coughing a few minutes after the Gao Gao made contact with him. Because of it, he tells Meta that he's unable to keep the pup and orders him to take it back wherever he found it. Meta sadly obliges to his mentor's order and leads it back into the forest.

A few days passed and Bate encounters the Gao Gao yet again in his home. He calls Meta over and scolds him for bringing it back into the house. Meta denies any part of it; saying that it ran off when he released it. Bate had a hard time believing him but eventually lets Meta off the hook and tells him to send it back to Kalmari Forest again. In truth, the Gao Gao was following Meta back to Bate's home each time and sneaks in whenever he finds an opening.

One night it crawled through an open window in the living room and searched for Bate. After searching a few rooms, he found the one with Bate resting in it. The little pup crawled up his bed and cuddled next to the elder. Bate suddenly wakes when he starts having a coughing fit and frantically turns on his lights to get his medicine. He completely flips out and scrambles out bed when he sees the same Gao Gao from yesterday burrowed in his blankets.

Gordon and Meta both run in Bate's room when they heard his shouts and saw the pup playfully rolling on his bed. Gordon grabs the dog-like creature and throws it out of the room before tending to Bate. After settling down, Bate questions Meta again, but the little Puffball was just as confused as him. Bate ends up leaving his home to stay with Ramset until the Gao Gao problem was taken care of. For the time being, Gordon tied it to a tree while he cleaned up all the fur it left in Bate's home.

The tiny pup ended up biting through the rope Gordon tied on him and ran to search for Bate. He tracked him to Ramset's house and climbed the tree where the pair resided. The Gao Gao peeked inside and saw Ramset poking fun at Bate. He quickly broke one of the windows to get in and came to the Puffballs defense; thinking Ramset was attacking Bate. He lunged at the Sasuke and tore up his hat as an end result. Bate actually found it quite funny and started laughing at the whole situation. (But mostly at Ramset's misfortune.) Even though it greatly aggravated his breathing, Bate grabbed the little Gao Gao and praised it for protecting him from the "big, bad Sasuke."

Gordon and Meta were shocked the next day when Bate told them he wanted to keep the Gao Gao. Gordon was uneasy hearing his friends decision; saying that he'll end up getting sick again if he keeps it. Bate didn't bother listening to him. He told Gordon that the little pup needed someone to care for it, and that it couldn't abandon it now after all it's done for him....which was just protecting him from Ramset, apparently. Gordon was extremely against the idea, but knew he couldn't change his stubborn friends mind. Of course, Gordon was right and Bate ended up getting gravely ill within in a few hours of the Gao Gao's stay.

Gordon took Bate to the hospital where he was met with a very agitated Bronto Burt. Mends scolded Bate for having such a stupid idea of caring for an animal he was clearly allergic to. The elder tried to explain himself, but Mends wouldn't bother listening to his pathetic excuse. He told Bate to get rid of the animal or else he could face serious health risks in the future. Bate refused, saying that the pup was too young to fend for itself, and that it only trusted him to care for it. He begged Mends to hear him out. He asked if there was any possible way of being able to keep him, and if there was, promised Mends he'd do anything for it.

Mends sighs at his pitiful plea, but eventually caved in and prescribed Bate allergy pills for it. He made Bate promise that if he was still having issues, even after taking the medication, that he would have to give up his beloved pet. Bate agreed to his terms and left his office.

Bate found the little Gao Gao waiting for him outside of his home a few hours after picking up his medicine. He knelt down as the little pup dashed towards him. Bate picked up the rambunctious mutt and lightly cuddled him; hoping he wouldn't start sneezing or coughing. To his surprise, he was feeling perfectly fine and felt no type of irritation after making contact from it. Thrilled, he placed the Gao Gao back down and opened the front door so he could let his new pet in.

-----------------
I always wanted to give someone a pet in the series. Seeing as Bate's the main fc, I decided to pick him! >u< Eee! So he has a cute little Gao Gao mix for the time being....though he still needs to take a lot of precaution so he doesn't trigger anything.
​
Species © Nintendo/ HAL Laboratory
Interpreted characters created from said species © Rhylem