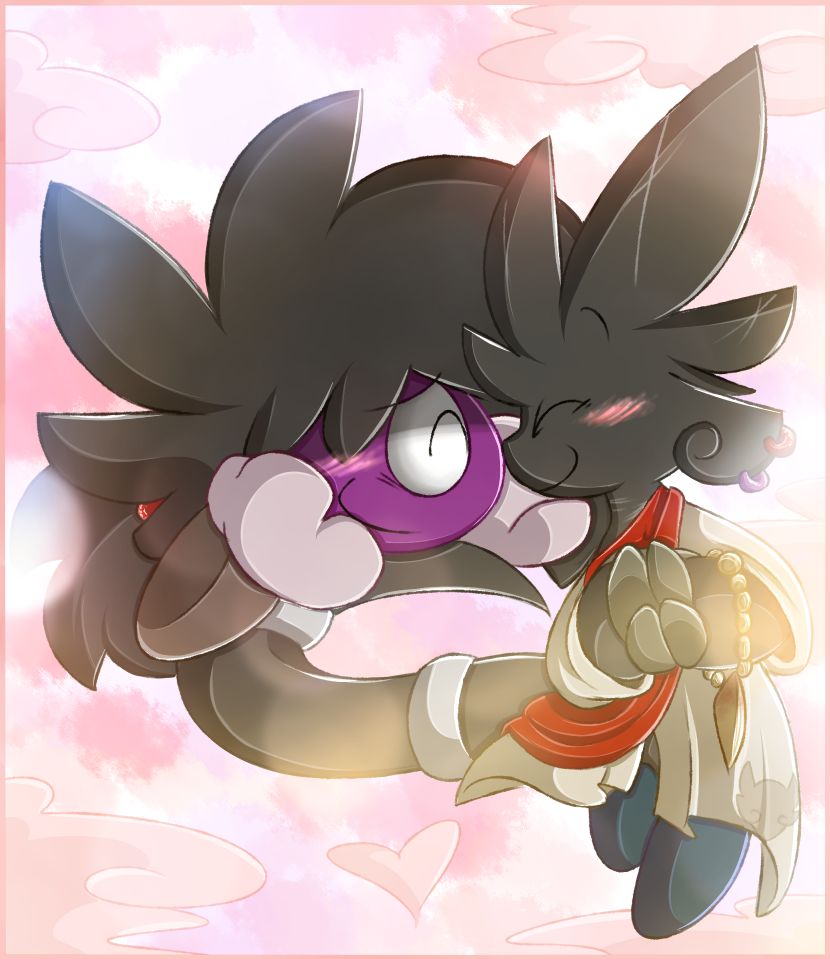 ​“Grav~!! Hey, Grav!!” Ramset waves to the Zoos once he spotted him in the distance. Around this time, Gravel is finishing up his afternoon meditation, and Ramset figured he’d take him out for a late lunch.

Gravel’s frills slightly twitch when he hears Ramset calling for him. He jumps from the stone pillar he's currently balancing on, and gently lands right next to Ramset. Gravel smiles brightly at the other, and gives him a small wave.

“So, my dad finished making a batch of those curry breads you like. I, ah, actually helped make some of them, and I wanted to see if you’d like to try some with me.” He offered.

Gravel gives an excited nod, and motions his tail forward to lift the other close to his face. With a small pink blush forming on his face, he gives Ramset a small nuzzle of appreciation.

“I knew that’ll make ya happy~!” Ramset beams, nuzzling the other in return. The Sasuke couldn’t help but laugh when Gravel continued to snuggle him.

“Haha, alright, alright. I love you too~!” He knows Gravel won't stop unless he says  it. Once he’s placed back on the floor, Ramset looks his way and gives him one of his cheeky smile. “Ya know I do, Grav! Now c’mon~!”
​
Ramset takes his hand and pulls him towards the direction of the plaza. “Let’s hurry before they sell out~!”
​​​​​​Artist Comment:

For those who don't know, I created an AU (Star Misfits) for GW. You can read the entire summary here~!

This is a bit of a timeskip. Rammy and Grav are late teens in this~! GW Gravel and SM Gravel are REALLY different. SM Gravel is very calm, very spiritual and does not have a blunt, rude attitude like GW Gravel. And of course, their outfits are totally different. ^o^

So, if you read the little literature piece above, you may have noticed something about Gravel. I don't think anyone would be able to catch it since it's not too noticeable, but he's not talking in it. For a short period during his teenage life, he's taken up a vow of silence. He's able to communicate with sign language if needed. Though it looks like Ramset doesn't need it to understand Gravel~! >v<
Species © Nintendo/ HAL Laboratory
Interpreted characters created from said species © Rhylem