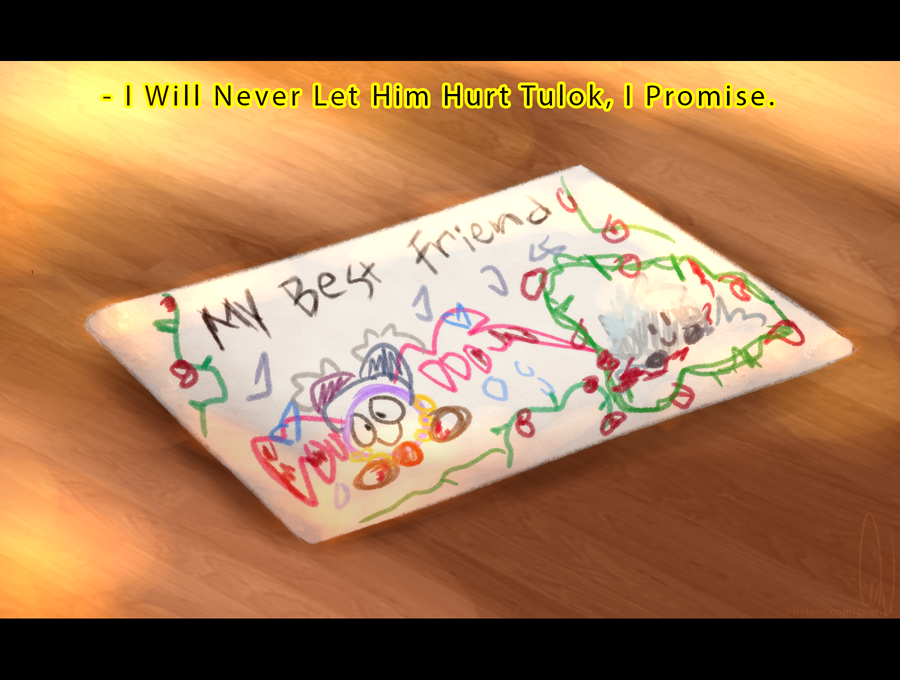 Kirby’s voice rang with fear and panic, and he scrambled into the hallway and made a mad dash to the main room. Again, he called out to her.

“In the kitchen, hun.” Kes called out, and Kirby immediately ran to her. Pausing to take a breath, he spoke.

“Did anyone visit Tulok while I was out?”

“A visit from who?” She turned around, and frowned at the sight when she took a look at him. “Dear, what’s wrong, why do you look so worried.” She reached up and cupped the side of his cheek.

“I…..” His eyes quickly darted around the empty room, and he ran to the hall just to double check he wasn’t being watched. “I just wanted to know. So…did anyone pay him a visit?”

“Aside from his doctor, no one else. Oh! Speaking of which, do you think you can take him to the clinic tomorrow aftern-Kirby? Kirby is something troubling you?” She paused when he noticed how worried he was acting. He was pacing the kitchen, and his wings were unusually puffed up; which usually indicates he’s nervous about something.

“Mom...I know this is going to sound weird, but do you remember Marx?” He finally spoke.

“M..Marx?” She repeated, surprised she brought him up after all this time. “You mean the little jester kid who used to bully you? It’s been awhile, but yes. What’s going on, did you run into him this evening?"

“I didn’t, but…..” He paused, and took a moment to reword what he wanted to say so it wouldn't shock her mother. "Okay, please don't panic when I say this, but I think Tulok may have..." He then reached up to grab a piece of paper from under his pauldrons. “Look what I found in his room.”

She looked at Kirby with a confused expression when he said that, but then focused on the paper in his hands. It was a drawing- a poorly scribbled crayon drawing of what looks to be Tulok. Next to him however was a Jester that greatly resembled the one Kirby brought up. The worst thing, however, was that was written on top of the paper. In bold black scribbles were the words “My Best Friend.”

“I…I just left his room not even five minutes ago. To get lunch ready.” She stammered. How could she not sense that someone was in the house? The baby monitors were on, she didn’t hear anything. Was this some type of sick joke?

Kirby watched as the features on her face started to mirror his. She eventually looked up, but couldn’t speak a word. Kirby gently placed his arms on her shoulders, and he gave her a reassuring nod.

“I’ll have Gooey keep an eye out. You know nothing will get past him under his watch.”

“I know, but....” She then looked at the drawing again. The appearance of Marx looked much different than the irritable teenager she knew many years back. He looked bigger, scarier…sort of like a Demon Beast. The claws, the thorn bushes...it was all too eerie.
​
She leaned herself on the kitchen table and tried not to cry. She remembered all of the terrible things Marx did to Kirby. Why did he have to come back, and why did he have to pick Tulok out of everyone. Was it out of spite? Jealousy? Revenge?

“Nothing’s going to happen to him, Ma.” Kirby hugged her. “Please don’t worry. I will never let him hurt Tulok, I promise."

Both didn’t speak a word, and he continued to hold and comfort the elder Leo even though he was just as doubtful as she was.
​-The End-
​​​​​​Artist Comment:

If you read the description on the previous illustration, I briefly talked about Marx. He long disappeared, but it seems like he's finally returned. Old doodles here & here showed what may have happened to him prior. Since I'm drawing Timskip stuff this month, I figured I'd finally talk about Marx. x)

​He looks a bit different, what is this form...Uh-oh....
Species © Nintendo/ HAL Laboratory
Interpreted characters created from said species © Rhylem