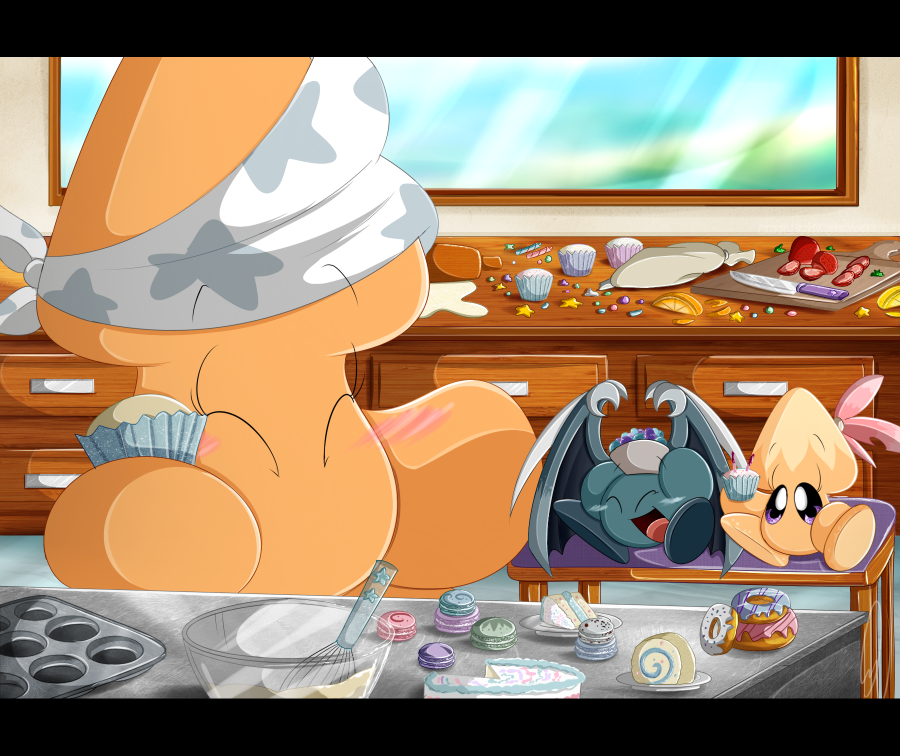 Hearing what sounded like a stack of pots and pans crashing on the floor, Ellie quickly woke from her sleep. Small voices hushing one another soon caught her attention, and it was then she realized who it was. Not a burgler like she had thought, but two very mischievous little twins.  Wrapped in the wings of her protective husband, Bate, the Squishy gently removed herself from her place in bed and quietly made her way to the kitchen. She peeked through the hallway and watched as Kade and Emma struggled to get the large mixing bowl on the counter.

"Cheep, ch-ee-iiirp. Chirp, cheeep, cheep!" Kade exclaimed, pointing to the floor. While Ellie had no idea what he said, Emma seemed to understand and nodded.

"Good idea!" She placed the bowl back on the floor, and motioned him to put all the items they got from the cabinet next to it.

Kade juggled several of the items and quietly placed it next to the bowl. The last item- a large carton of eggs was the last thing on the counter, and Kade climbed up the chair to reach it. Gently picking up the box, he tried his best to make his way down again, but ended up slipping and yelled out to Emma for help. Ellie's heart raced as her son started to lose his balance, and she quickly ran over to catch him and the eggs.

"Kadren Bate." She scolded once he was safely in her arms.  "What on earth do you think you were doing? You could've hurt yourself."

"S-sorry, Momma...." Once back on the floor, Kade lowered his wings and softly started chirping his explanation to her.

"We just wanted to make you a cake..." Emma piped up to translate for her brother. "For...Mother's Day."

Kade nodded to what she said, and Ellie couldn't help but smile at their thoughtful gift.

"A Mother's Day gift for me?"  Kneeling down, she grabbed all the items they took and placed them back on the counter top.

"Sweet Nova, what did I do to deserve such wonderful children." She spoke, picking up the pair and placing them on one of the highchairs. "Making a cake all by yourselves might be a tad bit difficult for you. How about we make one together?"
​​​​​​Artist Comment:

Late Mother's Day illustration. The details took a bit longer than expected, but I'm happy how it turned out. It seems like baking a cake turned into a whole dessert feast!