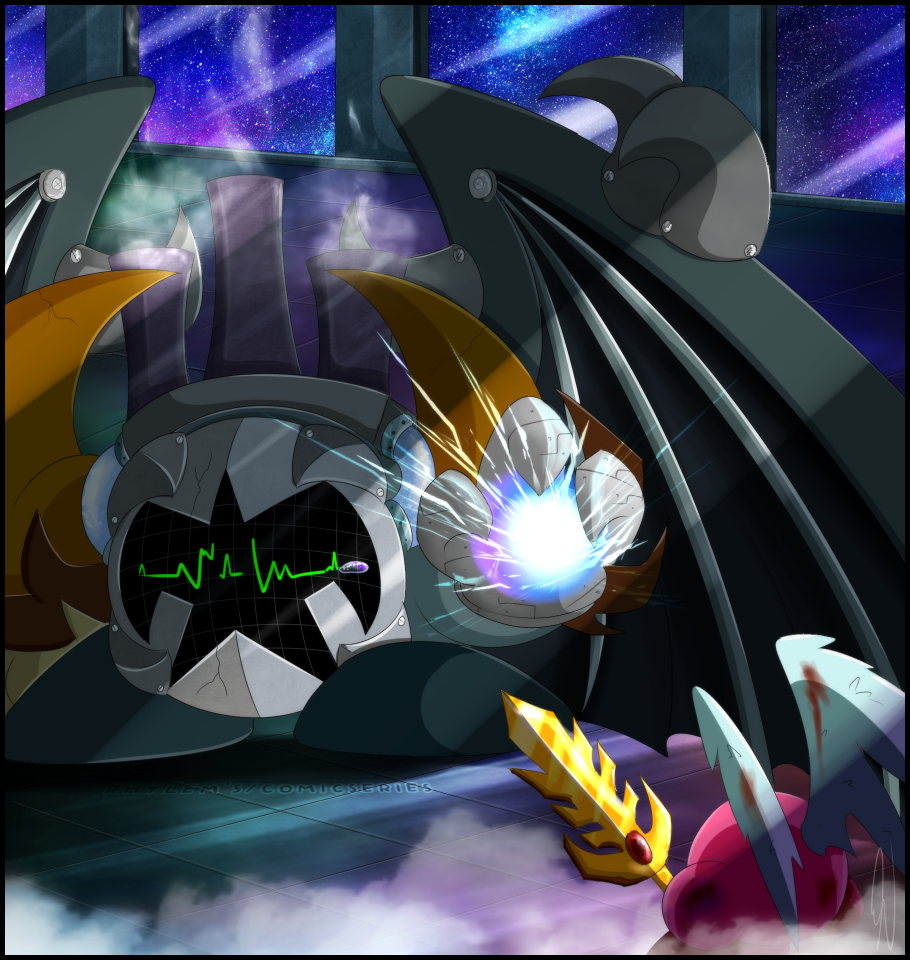 ​
​A whirr of movement made Kirby's eyes snap forwards, and he took a shaken step backwards to find B. A. T. E's hand pointed towards him, already charging for another shot. How-? He'd hit his back! He shouldn't have been able to move so quickly so soon!

Desperately, the young warrior flapped his wings in an effort to dodge out of the way, but it was useless. He was too tired to lift himself from the ground. Too pained to even move his feet. There was a bone-deep ache in his entire body that left him feeling like lead, and he felt the tears in his eyes begin to overflow at the very real prospect of his impending death.

Kirby trembled and swallowed, hefted his sword upwards in a vain attempt to block himself, but there was no need. B. A. T. E. didn't make a single movement, neither to shift his feet or flex his hand and fire the shot. It left the child feeling confused, and vaguely he could just see the glimmer of something wet from behind the war machine's mask.

His eyes widened, and with a surge of adrenaline did Kirby grip Galaxia tight in his hands. His grandfather Bate was still there...! It was his chance-! But... Could he really...?

B. A. T. E.'s arm trembled, and he saw the old warrior give just the slightest inclination of the head.

Kirby frowned, and his hands tightened around the sword. Okay. Okay. If it was truly what grandfather Bate wanted, then... He would finish this.

So, with Galaxia in his hands and with a spike of adrenaline rushing through his veins, Kirby forced himself to move. He let out a cry as he swung his blade high, and as he sliced down through Bate's mask, he thought he could hear a quiet murmur of gratitude.

Only for a moment, Bate was able to break free of control to help Kirby. =,)

The writing above is not mine. I commissioned a good friend to write it for this illustration because I love, love, love her writing!
Species © Nintendo/ HAL Laboratory
Interpreted characters created from said species © Rhylem