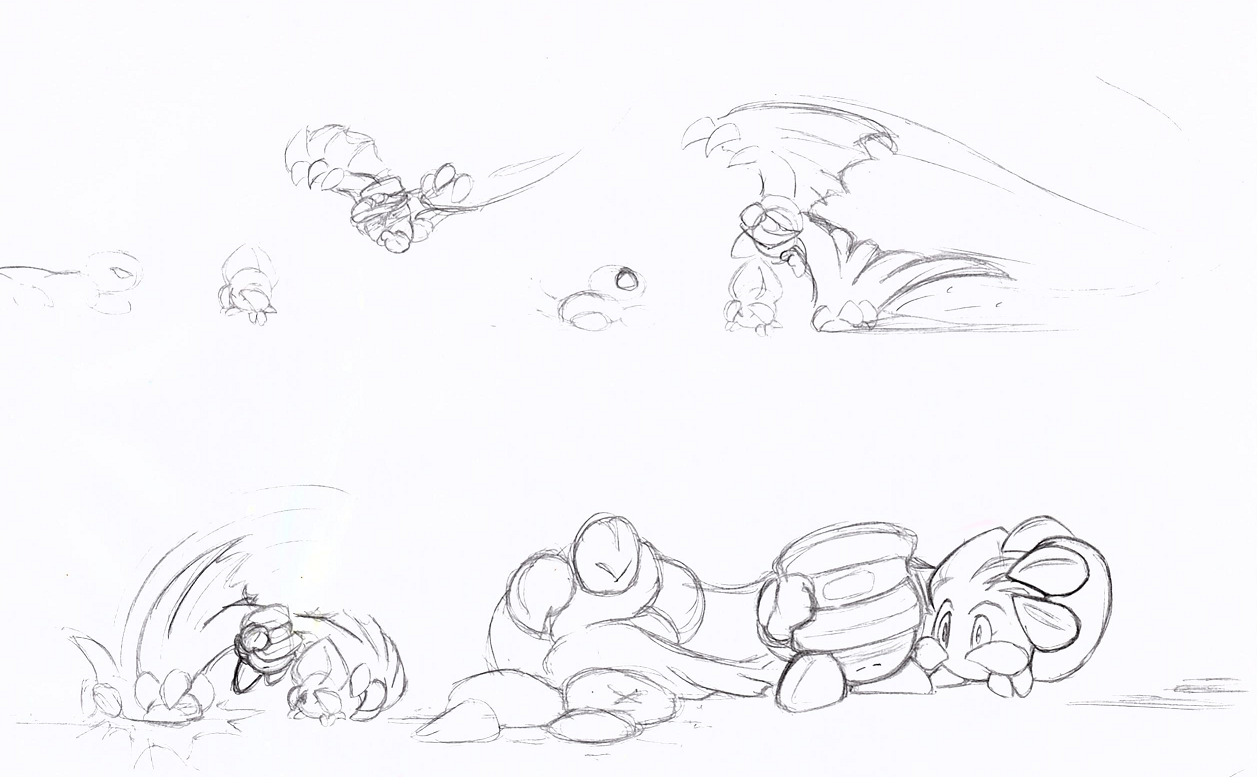 Bate, as he was getting ready for his first day as a postman, had mud thrown at him by some random passerby who then ran off.

This takes place when he's still widely rejected, but he's sort of grown numb to the abuse, so without a word he takes off his armor to clean it.

Then, before he can do anything else, he's suddenly alerted to the danger Ellie is in, and without another thought he flies off to save her.

He hadn't realized just how much the armor slowed him down in flight, but part of him was now grateful for that, because he can't quite control his flight at this speed.

When he arrives at the scene, he's only just able to stop himself from completely passing over by digging his claws into the ground and slamming his other wing against the monster.

The impact is loud and breaks the demon's neck, crushing its head into the dirt, and it dies instantly.

In the same moment, Bate had wrapped his other wing protectively around Ellie, instinctively ready to shield her should there be another monster lying in wait, and that's when he notices.

She's rigid with shock at the event, trembling with a fear he suddenly understood all too well, for his claws against her mantle could feel the distinct texture of scars.

These were old scars, but they were deep. The wounds had to have been terrible to leave such marks, for they had neither shrunk nor faded in spite of the time.

Worse still, they were claw marks. He could easily guess the scars had been left by the talons of some kind of bird, and his insides shook with a wild burning sensation akin to anger.

Somewhere in her past, Ellie had been hurt by a bird. This kind hearted woman, who had gone out of her way to care for him, had been traumatized by something with wings and claws.

In his mind he remembered all the times she'd shied away from his wings, and he realized it wasn't because of how touchy he'd been about them, when they first met.

Not counting Gordon, she was the only friend he had, and he didn't want to lose her now. Slowly he lifted his wing away, being careful not to make any sudden moves that might frighten her.

Before he'd put much space between them, however, she suddenly grabs his hand, "W-Wait!" Now he looks at her in surprise as she struggles to put words together.

There's something in her grip that makes his heart pound, and her eyes are colored with a strong emotion beyond fear.

All at once, as he notices the faint blush crossing her face, Bate knows what it is she wanted, and a shy smile dances in the corners of his mouth as he gently lowers his wing back into place.
​
As they stand in silence, each basking in the comfort provided by the other, Bate finds himself unable to look away from her eyes. Maybe, just maybe, everything leading to this moment was worth it...
This is made by my close friend, Nightlight. She's given me permission to post it here~ =)
​
Species © Nintendo/ HAL Laboratory
Interpreted characters created from said species © Rhylem
Story © Rhylem