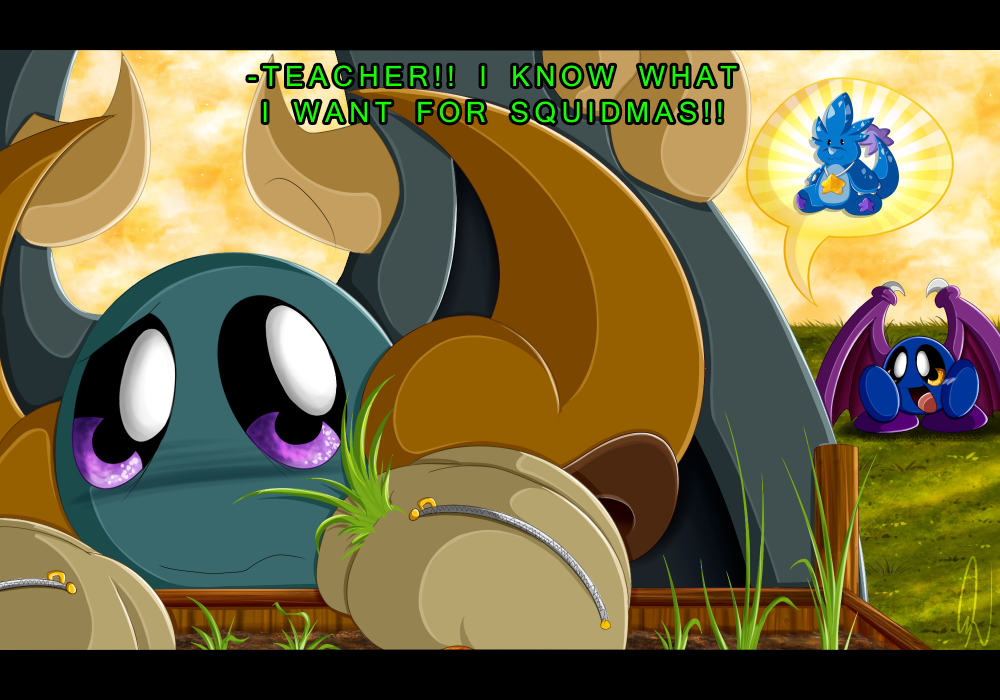 Meta happily called out to his mentor as he waved a torn piece of paper in his hands. The elder was tending to his garden on the side of their home, so it didn’t take long for the young puff to reach him. He called out once more to get his attention since his back was turned to him.

“In a minute, Gumball.” Bate said as he placed several carrots in the basket. “I need to finish picking these so I can get dinner started.”

“I..I know, but…” He eagerly rose his voice in excitement in hopes to get him to turn around. “I know what I want for Squidmas! ”

“Squidmas doesn’t begin for several more weeks. Just put your list on my desk and I’ll take a look later.” Bate calmly spoke, pulling another carrot from the garden bed.

Typically when it comes to Squidmas, Bate allows his students to write a small wish list of what they want; it mostly consists of toys and candy. Bate will always pick three or four items from the list and present it to them Squidmas morning. Meta, however, was almost a month and a half early! He normally asks for their list on the first week of the cold season, so something really must have caught the young warrior’s eye while browsing though his morning newspaper.

“B-but it’s important, Teacher!!! It’s gonna be sold out if you don’t buy it now.” He walked closer and waved the paper in his face.

“M-Meta-“ Bate stammered when his student got in-between him and the garden bed. He caught a glimpse of the newspaper clipping before losing his balance and falling back. With a small groan after hitting the floor, he looked up and noticed Meta blocking his view as he continued to shove the parchment in his face. Bate sat up slightly, and finally grabbed the paper to read it.

On the clipping was a picture of a small plush. It resembled a type of prehistoric creature with several stars on it. Meta always had a fascination with stuffed animals, so it wasn't uncommon for him to ask for one during Sqidmas.  Sadly, this particular doll was quite expensive compared to the others he bought in the past.

“But this one lights up in the dark when you squeeze it! Please, Teacher!!! I won’t ask for anything else for Squidmas, promise!!”

“I..ah….I'll see what I can do, okay?” He placed the paper under his pauldron and went back to tending to his vegetables.

“And be sure to get the one in the picture, Teacher. There’s lots of versions, but I want that color!”

“Blue and purple, how I could I forget.” The elder mused as the colors greatly resemble his student. “I’ll be sure to ask when I go shopping later this week.”

“B-but, it’ll be too late by then.” Meta slouched his shoulders and tugged on Bate’s wing. “Can’t we go tomorrow? That’s when its released. It says it’s limited edition."

“Gumball, that’s what all toys say before they’re released. Now go inside with Arthur while I finish this.” He spoke as he moved on to the next row of carrots.

“W..What if I help you? If we get it done faster, then can we go?” Meta released his grip on Bate’s wing and went to the front of the bed to help.

“You, helping with my chores?” Bate raised a brow, and moved to the side to let Meta through. “That doesn’t sound like the Meta I know.”

He watched Meta struggled pulling out a carrot, and instinctively held out his arms to catch him when he fell back after successfully doing it. He placed it in the basket and reached for the second one. Unfortunately, Meta’s strength wasn’t powerful enough to get the next one, so he had to intervene. He used his taloned wings to set Meta down next to the basket.

“Let’s work together and then we’ll check first thing in the morning, okay?” He spoke, handing him another carrot. “I’ll pick, and you place them in the basket.”

The elder gave a small hum and went back to work. Although it wasn't much since putting vegetables in a basket isn't that hard, he figured he’d be a bit lenient since the holidays /were/ coming up. Squidmas is his favorite holiday to celebrate, after all.
​​​​​​Artist Comment:

Squidmas is coming up soon, and Meta's already going through Bate's newspapers to find what he wants! It seems like he found something!! x)
Species © Nintendo/ HAL Laboratory
Interpreted characters created from said species © Rhylem