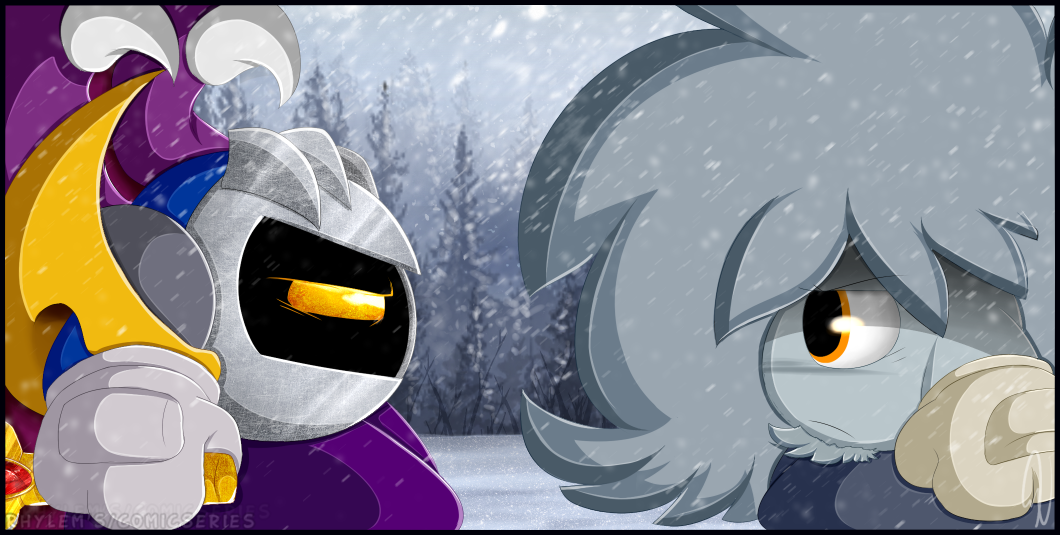 Meta didn’t expect a sudden announcement from his youngest son during dinner, and he certainly didn’t expect it to be something as big as moving out and living with his grandfather in South Nova. He quickly glanced at his wife to see what she had to say about it. At first she looked shocked, but she eventually composed herself and agreed with their son’s decision; happy and cheerful. Kirby is the same, giving his brother a small nod and a cheeky smile that caused Tulok to do the same.

And then they all turn to him for his reaction. Meta still hasn’t fully processed it. His son was moving..? Moving away to South Nova? But…

“Helllllooo? Earth to dad, are you in there?” Kirby’s hand waves over his face to get his attention. Meta snaps out of his thoughts, and swats his hand away before his brow furrows in disapproval.

“You’re too young to move out, Tulok.” Was all he could say. And by the look on Tulok’s face, everyone knew this was going to be a rather loud and fierce night at the dinner table.

“I’m not a baby anymore, Dad! I trained all I could here, and…well, Grandfather told me long ago that I’ll never reach my full potential while living on Pop Star. I’m an Ice Leo, and I need to train in an environment suited for one. I want to get stronger! I want to learn more! And South Nova is the only place where I can make my goals a reality."

Meta knows this. It always seems like Tulok is constantly battling with himself. Struggling more often than not in his training because it was too warm at times. Unless it’s winter, Tulok would spend most of his times inside trying to keep cool. No training, no flying, and definitely no fighting. Meta knows Pop Star doesn’t allow him to harness his full potential, but for what it’s worth,  he’s done well for a hybrid like himself.

Maybe….he’s right. Maybe it’s time he starts his training there. Eventually, Meta gives in and slowly nods. “For now long?”

Tulok doesn’t speak at first. He anxiously looks at the others around the table who were just as curious once Meta brought it up. He gives a small sigh, and reaches up to brush his hair away from his eyes so he could get a better look at his father.

“Dad, I...promise to always visit home when I get stronger, but…Grandfather needs a successor. Someone to watch over the village and be the next Chief."

And it was then Meta understood what he meant by that.  Wulfric is the chief; too important to his people to leave the village. Stepped out of South Nova only 4 or 5 times in his entire life. And eventually, Tulok is going to have to carry the weight of replacing Wulfric. Tulok- his son, his joy, his happiness, was going to move away forever……

The old warrior stands up without a word and leaves the table and into the hallway before the sound of a door slamming could be heard moments later.

Kes expected this reaction, and reassures her boys before excusing herself to talk to Meta.

His back was facing her once she entered, but she could tell he’s trying hard not to cry.

“He didn’t tell me directly, but I knew he was eventually going to. The look in his eyes, the desperation to forge his own path…” She sat down next to him and reached over to hold his hand. “It was the exact same way I looked when I decided to make Pop Star my home. And if I never went through with it, where would I be now? And where would you, Kirby and Gooey be? And…..and Tulok…."

She felt Meta tighten his grip around her arm. She gave a weak smile to her other half, and rests her head against his shoulder.

“But I didn’t let anyone stop me from going. I made the decision to leave my home in South Nova all those years back, and I don’t regret it one bit. This is something we all have to go through- even you. You left your home in Kalmari and made Pop Star your home. Meta, we may live far away but we never forget what our old homes taught us. Tulok will always carry the memories of Pop Star. Trust him, okay?

“He’ll always be our little Ice cube, I know. We’re his parents. But every good parent knows when it’s time for one of their own to leave the nest. Meta, please talk to Tulok. Nothing is gong to stop him from leaving. Don’t end things like this.”

Kes could feel Meta finally relax. One wing lowered while the other wrapped around her side while they sat in silence. Things were going to be different on Pop Star, and that was something Meta was going to have to get used to.


And there they were, standing across from each other. Meta firmly holding Galaxia in his grip while Tulok had the hilt he carved recently for just this occasion. Tulok knew from Kirby long ago that he’ll eventually have to face off against his father. Tulok’s sparred with his dad plenty of times, but this time feels different. The air is tense, and filled with anticipation as both warriors lock eyes with each other. This fight was going to decide everything.

“When Kirby defeated me, I gave him Galaxia as his reward. And for you, my blessing to live in South Nova as their new Chief. If you can defeat me, then my work here as your mentor is done.”

“You are my son, but I will not make this easy for you. Prove to me you are able to hold your own in battle, show me the skills you learned over the years.” His eyes narrowed. “Show me you want this more than anything.”

From the sidelines their family and friends watch, just as eager and excited to see the outcome.

“I am the grandson of a wise and powerful Chief, the son of two outstanding fighters, and the brother of one of the strongest Star Warriors on Pop Star. If I’m anything like my family, you would know I will never give up until my goal is reached.”

“I expect no less from my son.” Meta declared, stretching out his wings while Tulok did the same. “Let’s see if you’re up to the challenge then. Fight me!"

And with that, their swords meet with a roaring clash.

The fight has begun.

Tulok decides it's time to move to South Nova and train with Wulfric. This has been hinted before in this one-shot here. Tulok wants to get stronger, and the only way he's able to do such a thing is move in with his Grandfather in South Nova. He also expresses interest in taking over Wulfric's role as Chief. Everyone in the family is supportive in his decision, but Meta is still a bit hesitant. Meta does the only think he knows, and tests him one final time. If Tulok can defeat him in battle, then he'll be allowed to live and train with his grandfather.
Species © Nintendo/ HAL Laboratory
Interpreted characters created from said species © Rhylem