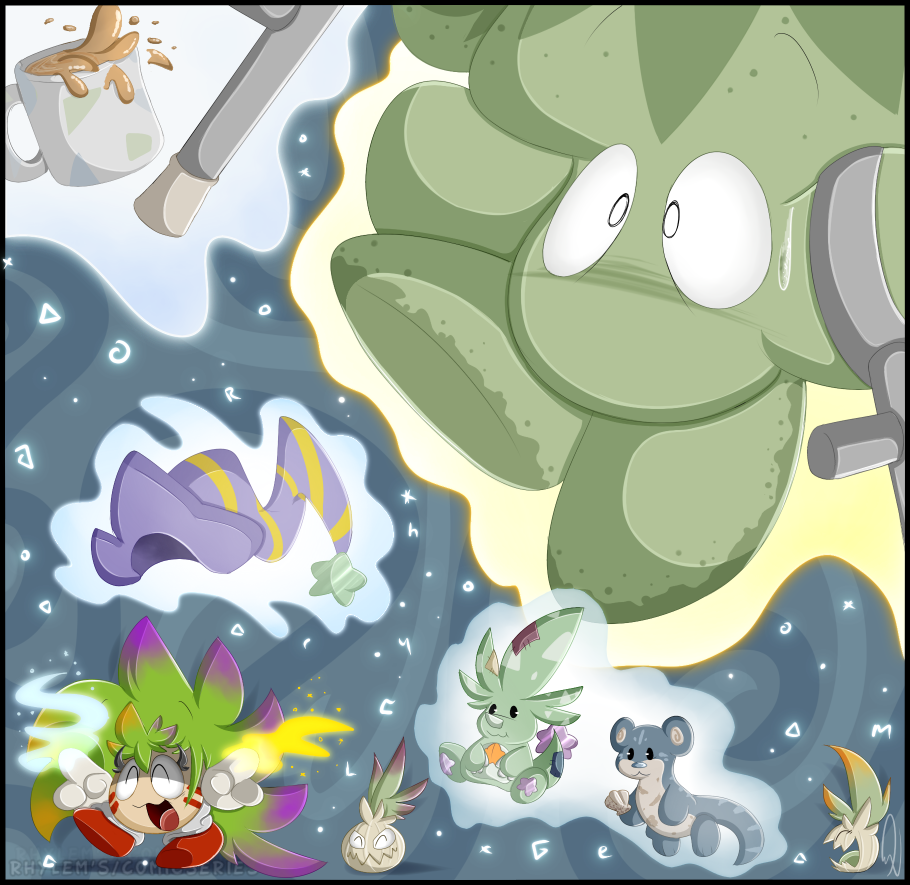 “Gryll, what did I tell you about levitating your father like that?”

PRECIOUS LIL’ BEAN! ToT She just wants to have fun with her father. >v<

I know I repeated this over and over again, but if you’ve read the Gumball Warrior Family Tree, then you probably know who she is. But if not, meet Gryll! She’s the super boisterous daughter of Cite and Vera! YEEE!!! I just love her!! I wanted to take a jab at drawing her without her hat, and I absolutely love how it turned out~! ^o^ SO FLOOFY!!! Since not much lore is posted about her in game, my personal headcanon about her will be posted below. I’m not too sure what her species is. I get she’s supposed to be an onion, but I suppose for my series she’s more like a Puffball/ beanbon hybrid-  Sorta what like Prim is…although she’s a beanbon/ Sasuke hybrid. I’ve been trying to think of a name for her kind to make it easier on me when I write about her. I’ve been leaning towards: Ponbon. Cite calls her bonbon as a cute nickname. XDDD But I’m still debating about it so nothing is final as of yet~!

Ah, anyways, I hope you enjoy reading a bit about her~!

A lot of drama focused around the couple when Cite heard the news her wife was pregnant. He worried nonstop that he wouldn’t be a good father; wouldn’t be able to help out as much as he could. Cite travels a lot for his job due to his art career, but doesn’t want to miss out being there for his family. Cite knows what it was like not to have a father around, so he ended up taking time off from his travels to stay by Vera’s side to help raise their child. He now works from home as an art conservationist. He’s got quite a long queue, so there’s never a shortage of work for him. He still travels from time to time, but it’s not as often like before. Vera continues to be his manager and helps with his work schedule, or booking appointments for his art exhibits.

Okay, so back to Gryll:

So I mentioned slightly is Vera’s bio that Gryll has strong, powerful magical abilities. Even at a young age she’s shown to easily levitate a wide variety of objects and people with ease. She’s around 4 years old in this illustration but as you can see she can already lift her father AND a bunch of other items. Her mother isn't nearly as powerful as her- only being able to summon blocks and lift very light objects like books or pens. Vera claims the last time she saw someone with such extraordinary power in the family is from her late Great Aunt Aggie. She figured it was about time someone in their family inherited her gift, and she has stated on multiple occasions how thrilled she is that it's their daughter who has it.

I also mentioned before how she loves to make the vegetables in their garden sentient. Her favorite are onions~! You can see two of them marching along with her. Their stems have different colors to tell them apart. I know in the game they have legs and arms, but I kiiiiinda like them without it. Maybe I’ll change it later on, but for now they stay limbless.

Gryll is a VERY energetic child. Always bouncing around the house, and always wanting to go out and play. When Cite can’t keep up, she uses her powers to levitate him so her could move faster. Vera often disciplines her not to do this. She knows her husband isn’t fond of having his movement disrupted abruptly like that. Gryll tries to listen, but it slips up at times when she gets excited about something. She claims to them that she’s just helping since his legs don’t work- which strikes a nerve with the Squid. Cite knows there's no malice behind it, but it does slightly hurt him anytime he hears her say that about him. When Dragato came to visit one day and noticed her levitating Cite, as well as hearing her reason why she does it, he set her aside to talk to her about it. Dragato, being the boisterous child of Ramset, had to learn patience when he befriended Cite. He wants to help her do the same, and while Gryll still retains her outgoing, eager personality, she tends to calm and slow down when it comes to her father.

Personality wise, many residents in Kalmari describe Gryll as…different. Some think of her as a burden due to her super creative nature. Creativity mixed with unstable magic can lead to some…interesting outings. Some of her favorite things to do while shopping with her parents is make produce, or shopping carts at the market float.  When dining out, she’ll levitate plates or utensils to make them dance on the table for fun. While her parents are used to it, they often play along and enjoy it, others can get a bit tired and even frustrated by her. Several shops have completely banned her from entering due to the chaos she caused in their shops.

Gryll is often compared to her father in regards to his mindset. Both are very creative, both think differently, and sometimes it’s difficult for others to see that as well. It causes some of the local kids to make fun of her. They tend to call her weird or a freak, and she often becomes isolated from those in her age group because of it. It also explains why she befriends the onions in her parents garden. She makes friends with them because no one will be friends with her.

As she grows older, she’s able to control her powers much easier. Gryll is also gains the ability to use elemental powers as well. One would describe her powers as slightly chaotic, and reality breaking. She tends to ramble a lot- snapping her fingers to summon items into thin air to get her point across easier since she has trouble explaining things. She also has more of a cheeky behavior as a teenager, and can be a bit smug at times to those who anger or upsets her. Of course, she will never use her powers for malicious purposes....just to pester and tease. She can easily defeat demon beasts, but she honestly finds that really boring and leaves the fighting to her other cousins. While she uses her powers for just about everything in her everyday life, she's able to tone it down while shopping so she doesn't upset the residents of Kalmari. She understand why they acted the way they did when she was a child, and later apologizes to the storekeepers she heckled in the past. All bans previous made were lifted, and she's become quite good friends with just about everyone in town.

Although she’s older, she still keeps several onions sentient as company. They’ve been her best friends since childhood, and she still sees them as companions.

OH!!! I ALMOST FORGOT THE MOST IMPORTANT THING OF ALL!!! If you're wondering how she's able to fit all that hair in her tiny hat.....MAGIC!!! (ﾉ◕ヮ◕)ﾉ*✲ﾟ*｡⋆ Wait...does that mean Ramset has...... XDDDD


Ummmmm....I think I'll end it there. I haven't brought up her broom yet, or the relationship she shares with her Uncle Dragato. I would like to work on Drago's backstory a biiiit more before I say anything. x) But for now, I think I said quite a bit. I hope you enjoyed reading about her~! ^o^
Species © Nintendo/ HAL Laboratory
Interpreted characters created from said species © Rhylem