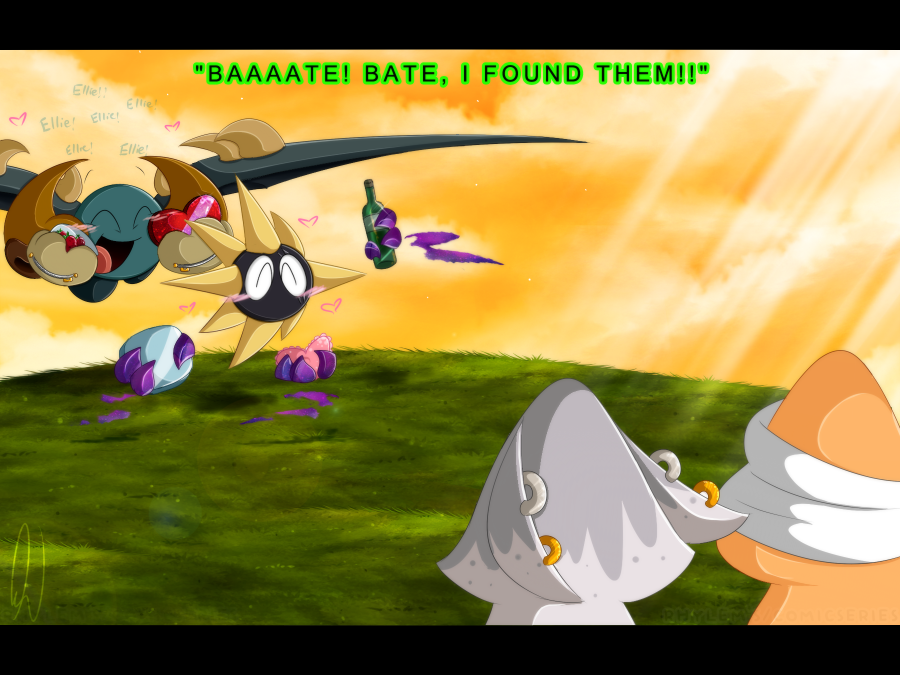 ​
​
"I don't think I've ever been this spoiled in my life, and believe me, Gordon's quite the charmer." Alba smiled as she began to reminisce. "Right when I woke up, I saw him making breakfast."

"Oh?" Ellie gave a small smile when she heard that. "My precious Bate did the same thing this morning too! I wonder if they planned it together. Let me guess, heart shaped pancakes?"

"With strawberries and whipped cream." Alba spoke in between giggles. "Oh, our boys. What did we ever do to deserve them, Ellie?"

Before the Squishy could even reply, several shouts caught the attention of the two.

"Baaaate! Bate, I found them!!" Gordon shouted as he carried several gifts for Alba.

Not a moment later, Bate was speeding behind the Gordo carrying presents as well. "Ellie!!! Ellie, Ellie, Ellie!!! You didn't open up your gifts!!!" He shouted and proceeded to head to her.
​
​​​​​​Artist Comment:

​
Bate and Gordy...where to I even start with them. They're such silly, goofy dorks!!! In their younger days, their maturity matched that of a Gao Gao.

Oh, they were such goobers when it came to making Alba and Ellie happy. They would always try to impress them, but end up looking so cheesy or stupid when doing so. I remember an extremely old one-shot I wrote of them being all competitive during a simple game of volleyball so they could impress them. I believe Gordon popped the ball on one of his spikes, and Bate got tangled in the net as a result of them trying to showoff. Fun times, fun times.

Of course, the two Squiddys find it so charming. They love their dork boys, and nothing can ever replace them. x)