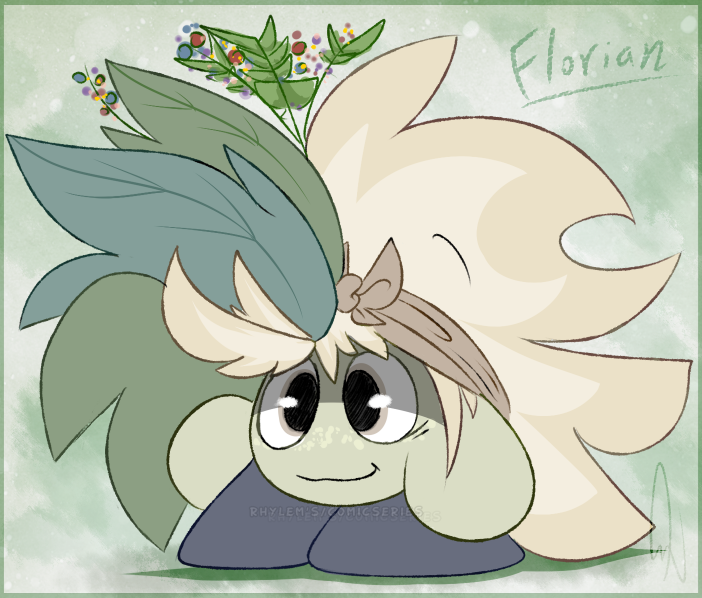 It feels just like yesterday I posted this pic of introducing Atticus to the series. And now look, he has his own little babu now~!! ^o^

The little cutie you see above is Florian~!! (Nickname: Sprout)  He is the son of Atticus and Prim. <333 He's a mixture of both parents. Atticus being a Leo/Puffball & Prim being a Beanbon and Sasuke. I think a very noticeable trait that highlights both parents is his hair. It's split into his father's floofy hair, and his mother's plant like hair. He has to use a bandana to keep most of it back. <3333

Florian, like his parents, is a huge plant fanatic. He wants to walk in his footsteps of his Grandmother Petta, and father~ >v< Although he's young, his knowledge in plants is immense. Being the son and grandson of two world renown botanists has given Florian many opportunities to learn everything and anything on the subject. Atticus couldn't be happier his son is eager to learn everything there is about his professions. Florian spends a lot of time in his father's flower shop (mostly in the back where all the plants are located at.) He also loves to visit many of his father's flowerbeds scattered throughout Kalmari town. Atticus has given him the task to raise some of the simpler beds, which Florian takes with the utmost importance.

Arthur and Petta (Florian grandparents) are the epitome of "Best Grandparents ever!" They do their best to be in their grandson's life whenever possible. Florian adores both elders, but gravitates towards Petta a bit more because of her vast knowledge of all thing plants. He loves to visit just to spend time in her garden, or to listen to her stories on how she obtained each one, or the history and origin of them.

Florian's nature is similar to young Atticus. Very calm, gentle- doesn't like to roughhouse. He prefers to observe and watch before attempting to try something. Due to his attentive nature, he's been given the privilege to assist his father while working on certain projects. Atticus trusts his son to listen and take caution when needed. And because of it, young Florian has helped and assisted his father many times.

Florian has the ability to use fire like his father. He doesn't like to use it, however, and over the years his ability is almost non existent due to never using it. The ability does come back, however, when he was attacked by a demon beast. Unlike Atticus, he does not sustain injuries if his temperature gets too high. It's thanks to Prim's genes (Being part Sasuke) that Florian is not negatively effected by using his fire like Atticus. ***Lore explained here that Sasuke are natural adaptors of elements here.

-----
​
Florian has a sister in earlier concept  (Florette), but is scrapped at this time. Both are twins, and both have wings. BUT Florian lost his after protecting his sister. He was quite young when it happened, so he doesn't remember much, and isn't bugged about losing them. His sister has the same hair concept, though hers is not as floofy as his. I may add her, but I'm still not sure. XDDD You can see how she looks like below~


Anyways, I hope you enjoy the new addition to the GW family~!!
​ 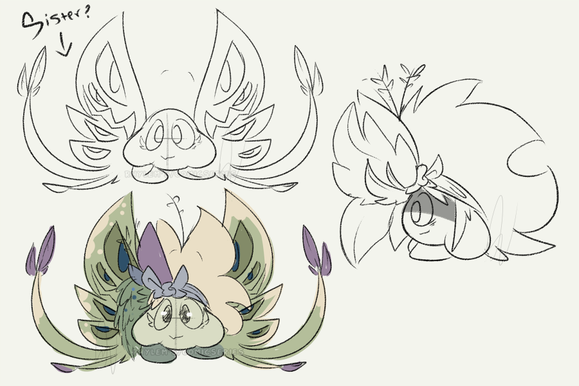