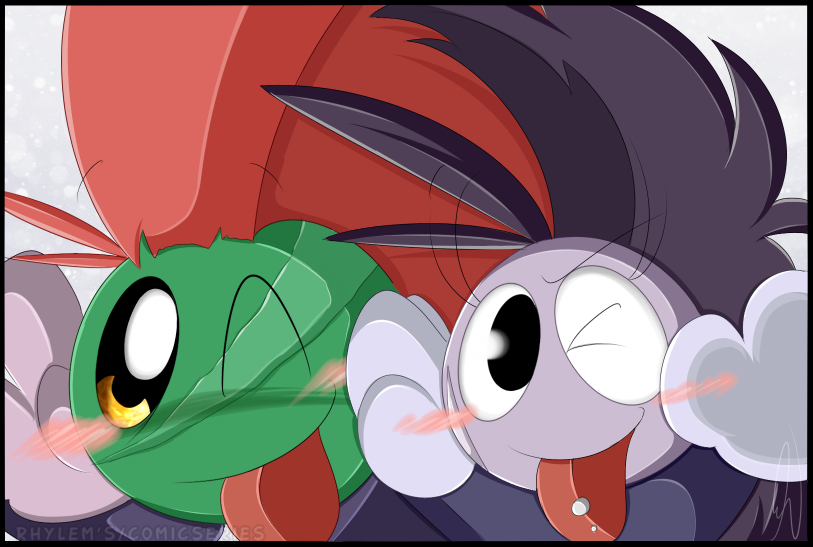 ​​
​“Hey, Tula, do you know what we haven’t done in a while?” Falspar asked as leaned on the doorframe of his daughters room.

“Hm?” The Sasuke snapped her attention towards him, and she used her pencil to lightly tap her chin to think. “Ummmm….pull a prank on someone?” She slyly shrugged.

“Nope, it’s something we used to do all the time. Try again!"

“All the time...?” She tried hard to recall any sort of memory they shared together everyday, but unfortunately drew a blank. “I, ummm…..don’t really know…."

“Oh, Tula, how could you forget?” He dramatically let out a few fake sobs before showing her the camera he was hiding behind his back. “Take a photo for the family album, of course!"

“Dad, we took a bunch of photos last month during the First Summer celebration. That’s hardly considered a long time.” She couldn’t help but roll her eyes. “I thought you said it was something we haven’t done in a while.”

“Little Plum, a few weeks does count as a long time! Now hurry! The longer we wait, the longer we deprive the album with more fabulous photos of us!” He motioned her out of her room so they could take one. “And get the old fireball up, and tell him to help us!"

Tula watched as his father happily dashed to the living room before he called out for her to hurry again. The Sasuke set aside her work and headed towards her parents room where she lightly nudged the resting Leo.

“Pssssst, sleepy head, get up.” She playfully tapped his cheek, “Dad wants you to hold the camera while we take a picture."

“Wha-a? Ugggnnnn-Tulaaaa…..” Pyrell could only mumble in frustration when his sleep was disturbed. Seriously, he was woken from is nap to take a photo??? “Sweetie, you have my permission to burn his camera to a crisp, and discard the remains into the ocean. You won’t be grounded or held responsible, I promise.”

“And if I do, wouldn’t that just give him an excuse to buy an even better one?” She spoke, and shoved the figure some more before he eventually sat up.

“Darn it, good point.” He softly grunted as he tried to get out of bed. "You think after seven years, this obsession of his would die down….”

“Look at it this way,” She went to his side to help him. “If I ever go missing, at least you and dad have more than enough photos for the milk cartons.”

“Thank you for providing me with that overly bright, peachy example, Tula. Sweet Nova.” He shook his head from her morbid statement.

“I prefer plums, but peaches are fine too.” She humorously stuck out her tongue and lead him to the living room where Falspar was eagerly waiting.
​​​​​​Artist Comment: