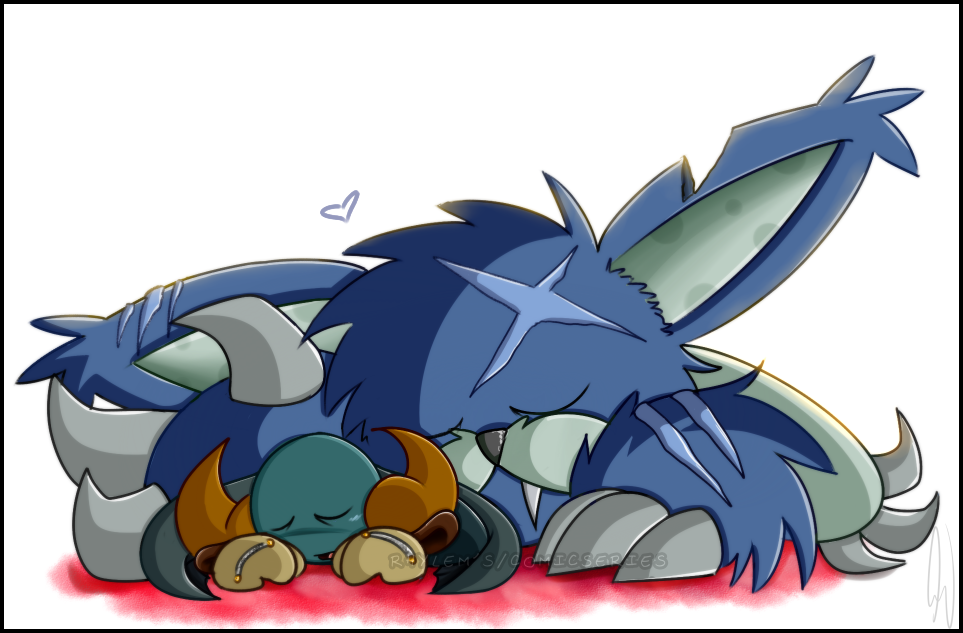 Bate’s precious little pet had quite a growth spurt over the years. (Though if you tell Bate, he’ll say he hadn’t noticed.)
I haven’t really written much about his pet, so I just thought I’d finally post a a few things about him-


This adorable blue fluff of snuggles is named Kisses!

Kisses is a Gao Gao mix who is the proud pet and protector of Sir Bate. He is extremely loyal and loves to snuggle, play, and shower him with tons of slobbery kisses.

He is not a huge fan of Ramset, and vice versa. Whenever he pokes fun or annoys the elder, Kisses will come to the rescue and protect him from the mean, horrible Sasuke. Ramset’s reason for not being too fond of Kisses is that he always chews on his hat and his precious, valuable boxes of Nova Crunch.

That being said, Kisses has a bit of a chewing problem. He had a bad habit of chewing on Bate’s furniture, books, and anything else sitting around his home. The elder quickly put a stop to it, and ended buying young Kisses lots of chew toys to resolve the issue. There’s a high chance you’ll probably be hearing random squeaking noises throughout the day. x)

Kisses LOVES to play fetch, but does a very poor job of doing so. If told to fetch one of his squeaky balls, Kisses will go and fetch everything other than said item- sticks, food, rocks…..Ramset.

Over the years, Kisses has grown A LOT! He’s also gained a few scars from scuffles and fights. While Kisses loves Bate to bits, he doesn’t live with him anymore due to him being almost larger than Bate’s room, and many residents accusing him of being a demon beast. Although Kisses redeemed his name after protecting the town from an actual beast, Kisses prefers to stay in the out lands as it has much more space and food. Kisses, however, will regularly visit his master, or if he senses that he’s in danger.

Overall, Kisses is just as cuddly and playful as his puppy years. He will forever be there for Bate when he needs it…and also to munch on Ramset’s Nova Crunch. x)
Species © Nintendo/ HAL Laboratory
Interpreted characters created from said species © Rhylem