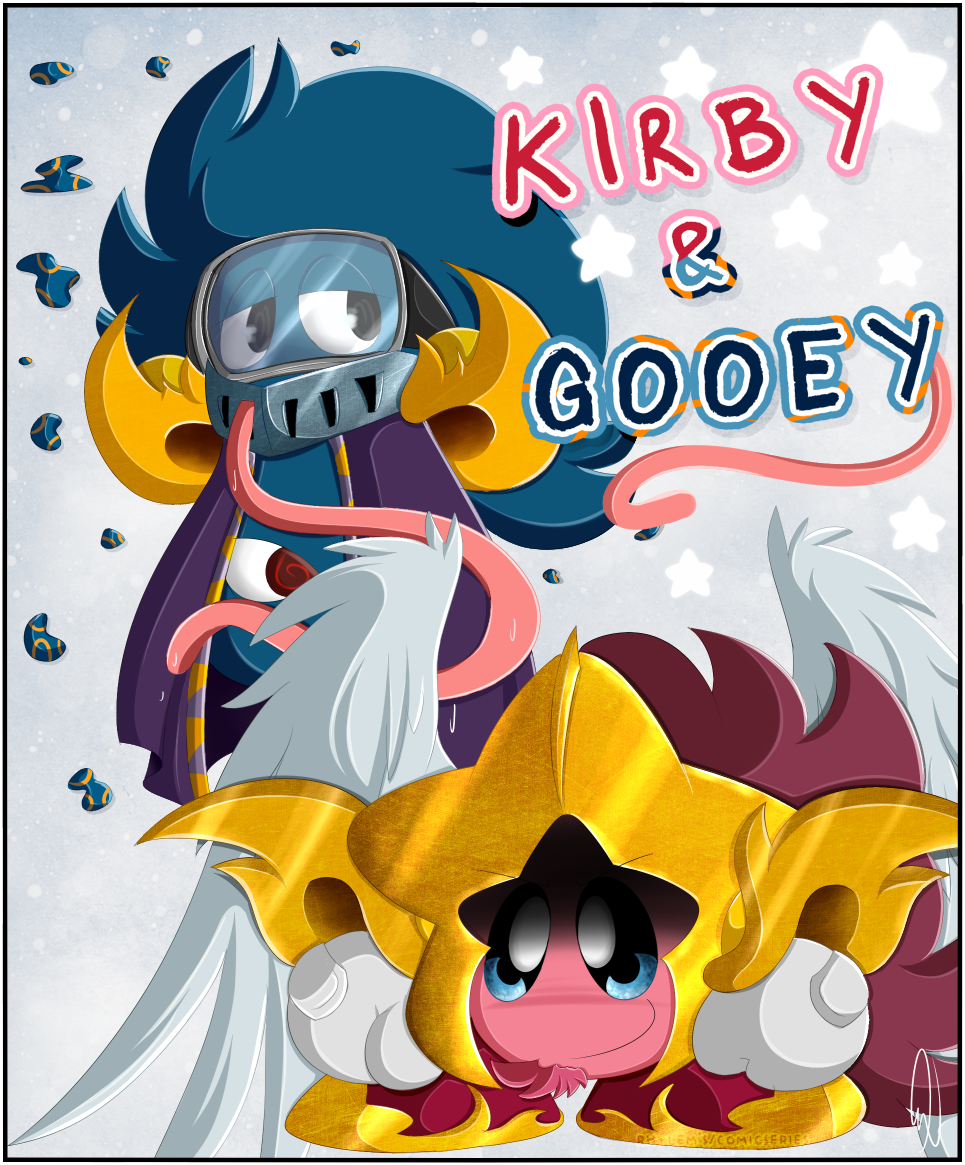 A really old sketch I wanted to finish. I never talked much about his timeskip days and it kinda lit a fire in me to get something done. I dug up this old thing and decided to work and polish it. I went for a helmet like Arthur, with a star silhouette..and the helmet is star shaped too. >v< I think it stands out, and I really like how it looks. x) I also wanted to include Gooey, since he's Kirby's friend and comrade.

Read below for some small info about him:

It looks like Gooey's not a little blob anymore! If you know from my series, my headcanon is a Dark Matter can only grow when it feeds off of negative thoughts. Of course, Gooey would never hurt Kirby or anyone in general, so the reason why he's in a different form is because of another Dark Matter he consumed. Said Dark Matter was VERY powerful, and attacked and almost killed Kirby. Gooey used himself as a shield to protect his friend before the final blow, and ended up absorbing most of its power. He was able to defeat the Dark Matter after changing into his new form, and he's stayed like that ever since. The Dark Matter Gooey defeated is dormant in his body, but traces of it can be seen. (The eye on his stomach)

Gooey is incredibly powerful, and is loyal to Kirby, and Kirby only. He isn't as goofy or boisterous like he once was, but will still join in on Kirby's shenanigans....only because Kirby drags him into it. He still has his signature tongue, and will use it often against an opponent. He and Kirby work well in battle, and their style is fluid where it seems like they can read each others thoughts. He doesn't talk, but it seem like Kirby is the only one who is able to understand him.

Gooey currently lives on Pop Star and will help Kirby defend and protect their home from any threat.

As for Kirby, he's about in his mid-late 20s in this. Like Gooey, he's a powerful fighter who protects his home from Demon Beasts. After his parents retired, they passed on their duties to him and Gooey. They still help from time to time, but Kirby proved to them that they don't need to worry about him anymore. Personality wise, many compare him to Ramset in many ways. Very happy and carefree- but smug and sassy to those he's close too.

He mainly relies on his wings, and sword in battle. Being trained by Meta, Arthur AND Bate as a kid, he's one of the top fliers in their family. From Meta, Kirby became a master swordsman and was gifted Galaxia when he defeated Meta in battle. From Kes, Kirby learned a variety of fighting, and defensive moves, and is exceptional when it comes to handling any type of weapon. He also knows many survival skills from her, and knows how to hunt, track, and distinguish many plants and shrubs deemed edible. Both parents are proud of their son and knows they not need to worry for his well being; for he is seen as one of the strongest Star Warriors.

Kirby is also a proud big brother to his younger sibling, Tulok. The biological son of Meta and Kes, Kirby was in his late teens when he was born. Though there's a large age gap between them, they have a close brotherly relationship and easily get along. Tulok looks up to his older brother, and will always try to tag along when he goes patrolling- though Meta and Kes quickly intervene.  When he's not busy patrolling Pop Star, Kirby would spend his free time teaching the young child to fly when Meta isn't around, and help maintain his wings since they both have feathery appendages.

Tulok has very frail health from being born prematurely, as well as being a hybrid. Right from the beginning, Kirby shown a protective instinct towards the little Leo. Kirby would sometimes leave his duties with Gooey while he kept an eye on him. Many would describe Kirby as a very protective brother who would do anything to make sure he's okay. Many days and nights were spent by Tulok's side as he kept him company. As a child, Tulok needed to stay in a chamber to maintain and monitor his temperature, so Kirby would always pass the time telling him stories of his past battles, or tales of his late Grandfather Bate. Kirby is also the only one who can successfully comfort and help calm him down when his temperature becomes irregular, or he has trouble breathing due to his asthma. Meta was surprised how much Tulok took a liking towards Kirby, and was proud his son has a brother like Kirby watching over him.

His promise to keep his brother safe shined when Tulok's kidneys were beginning to fail as he grew older, and he offered to donate one of his. Although Meta and Kes went against this, Kirby refused to listen to them and said it was HIS decision, not theirs. In the eyes of their parents, the bond both brothers share are inseparable, powerful, and strong.

Kirby's list of friends on Pop Star include Gooey, his cousin Coo, a hamster named Rick, a fish named Kine, and an unusually pompous penguin with an equally unusual name- King Dedede. When he was younger, there was a jester named Marx who used to pick on him, but he hasn't seem much of him anymore as he grew older. He sometimes wonder whatever happened to him.

Kirby's Guardian died when he was an infant, so he doesn't remember much of them. His uncle Ekon and aunt Margalo (both Guardians) will tend to fill the role and come to his aid if needed.

Kirby still keeps in contact with his cousins in Kalmari Town. He visits at least once or twice a year to hang out and catch up with them. With Atticus, he loves to challenge him in sparring matches since Atticus is considered much stronger than him in strength. Petta usually has to break up their wresting matches since last time they broke one of her vases that held a very rare plant. Tula and Cellic usually watch from afar and question their cousins immaturity. All in all, they still have a strong bond with each other and will continue to maintain it even as they grow older and start families of their own.

Aaaand that's it for now. I hope you enjoyed a little snippet of him! ^o^
Species © Nintendo/ HAL Laboratory
Interpreted characters created from said species © Rhylem