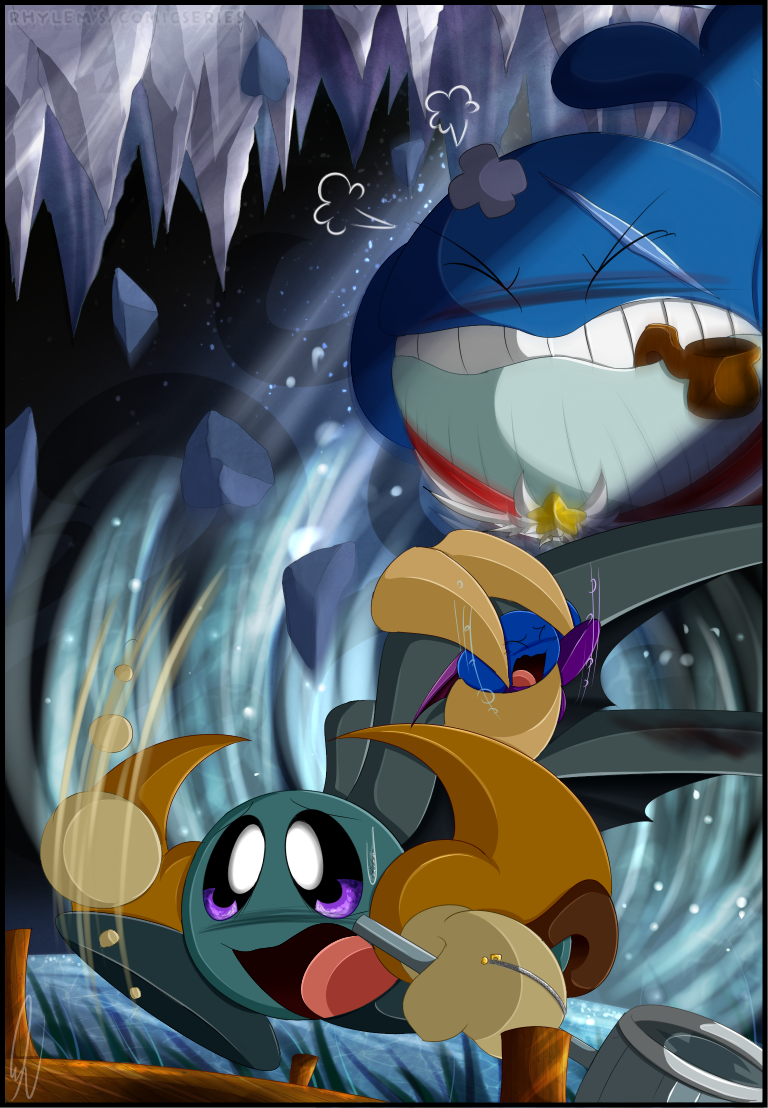 Bate mumbled to himself when he saw the large underground lake that rested under the sub-tree area. The bridge above said lake seemed quite old and rickety- which made matters worse since Bate was unable to swim if he were to fall in the dark, mysterious water below. He carefully reached out and tapped one of the wooden planks with his newly obtained hammer.

“It....seems steady enough, I suppose.” He spoke with much hesitation. He glanced across the bridge and noticed a small speck of light on the other side. He knew that was the only way to get to the next area, so with a bated breath, he started to cross the creaky bridge.

“Let’s go, Gumball.” He called behind as he took a few cautious steps forward. When he didn’t hear a response, he spoke again with volume, “Gumball, I said-“

"Teacher, Teacher, Teacher, look!” Meta beamed and dashed forward past Bate. He eagerly grabbed a stone he saw on the floor, and threw it in the lake. It little stone skipped a few times before finally settling down and sinking. He giggled a bit and took a few more steps forward to grab another.

“Meta, get away from the water!” He ordered, “I’m not going to jump in if you fall!”

“I’m not gonna fall, Teacher, don’t worry.” He threw another rock in the lake before running up to Bate and handing him one. “Here, see how far you can skip it!”

The elder clutched the stone and gave an unsure glance at him. “Gumball, I don’t think this is a good idea....”

Bate paused for a moment and listened to his surroundings. From what he could tell, it was extremely quiet- A bit eerie, but he still couldn’t be sure if Meta was right. Would throwing one tiny little rock do any harm? He eyed the stone in his hand and glanced back at Meta who was waiting for him to throw it.

“Fine, fine- you got me.” The elder smirked a bit and threw the stone in the water. It skipped past Meta’s stone, and eventually lost sight of it when it skipped far past their range of vision."

“Wow, Teacher, you threw it so far, I can’t even see where it stopped! That was amazing!”

"A-ah, thank you, Gumball." Bate sheepishly rubbed his head from the compliment. "How about you find one more stone for us, and then we can start heading to the exi-"

The loud, ominous echo caused Bate’s blood to run cold. He looked around the dimly lit cave before grabbing Meta and dashing towards the exit on the other side. He didn’t know who it was, but if it was like any of the other creatures he fought off earlier, he knew he needed to get out as quickly as possible.

“T-Teacher!” Meta cried and tried to get out of his grip, “Y-your clutching on to me too hard!”

“We’re not alone, Meta.“ Bate continued to run as he tried to dodge and jump over the broken planks of wood, “We need to get out of here before-“

“Leaving, I presume you were going to say?” A low voice called out.

Bate quickly halted as he saw a rather large figure heading towards him. It took a few seconds for the light to finally hit the creature, and Bate instinctively tried his best to hide Meta under his injured wing when he saw who it was.

“I-I’m sorry." Bate quickly blurted out. “W-we’re not from around here....as a matter of fact, we were just about to leave-"

“Without apologizing?” It spoke with much force, and blew a puff of smoke at them. “Quite rude of you, don’t you think?”

Bate timidly backed up and used his good wing to fan the smoke away from him. “V-very....” He slightly bowed his head. “Please, I didn’t mean to cause any disturbance."

“But you have.” He lifted his tail and slammed in in the water, causing the old bridge to rock back and forth, “My, my- I was just spending another quiet day to myself when lo and behold- a rock hits me! You think you can just waltz in here and treat the keeper of this land with such disrespect?! Ha! You must be even stupider than you look!”

“H-hey!!” Meta peeped and wiggled out of Bate’s wing. “Don’t disrespect my teacher!”

“It was just an accident, so leave him alone you grouchy, fat whale!” Meta barked.

“F-fatt?!!!” The creature roared. He raised and slammed his tail in the water once more and glared at the pair.

“Well, Teacher...." He growled, "Thanks to your little student, this lake will now be your grave!”
​

I thought I'd finally finish this illustration. x) Gotta love The Great Cave Offensive, the bosses are so cool, and I can just imagine those two getting in so many shenanigans. You could say their first boss went off to a /rocky/ start. Then again, you probably shouldn't call him fat, Meta. =OOO
​
Species © Nintendo/ HAL Laboratory
Interpreted characters created from said species © Rhylem