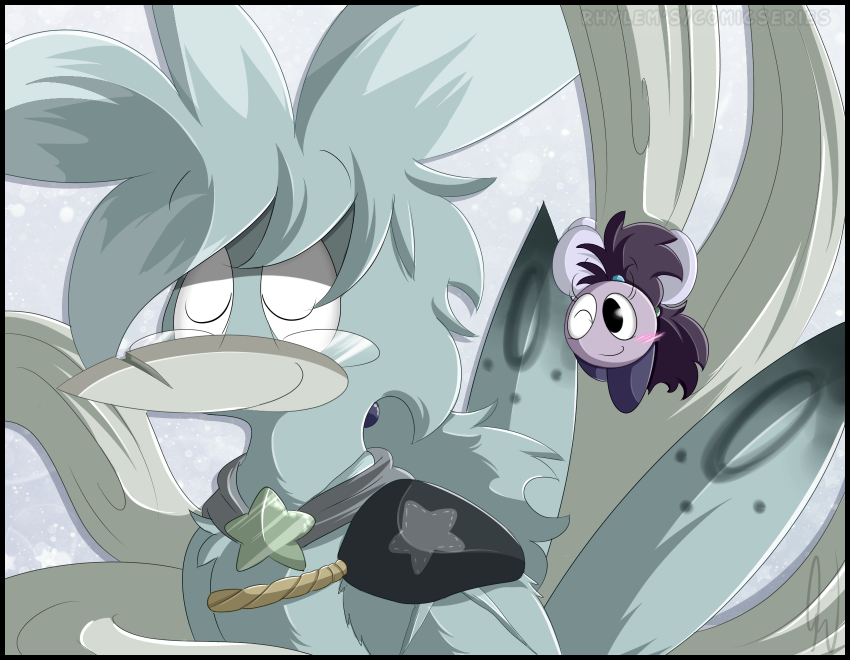 “Uncle Alto, you have the coolest tails ever!!!”

Yeeee! I figured I’d draw Tula with Atlo since he’s her baby-sitter when both daddies are away. (Which is VERY rare, but the two love to hang out everyday.) She LOVES to use his tails as a swing. XDDD

Alto’s appearance has slightly changed over the years. His hair has grown out, and is much, much fluffier. (And fabulous) He also wears a small scarf that hides a pretty large scar. Tula gave it to him as a get well gift when he was recovering from his injures from an incident I will not go into at this time. And most noticeably, he wears a shoulder wrap to support one of his wings due to the accident I mentioned above.

Alto cannot fly very well anymore because it causes him a great deal pain, (As well as one of his legs) but he really tries his best for Tula since they used to fly, play and explore a lot before the incident. Tula tries to let him rest because she does see him get tired more often than usual (Which Alto does not prefer because he wants things to be like the way they were before) Eventually, Alto has learned to accept certain things in his life when Falspar, Pyrell, Atka and Bate went to lecture him, so the Guardian spends a good part of the day resting and, if able, play for a short time with his niece.

Alto is also extremely formal and puts Star Warriors above all else before him. (Which is something Falspar isn't fond of) During his recovery, he still tried to take on the duties of being a Guardian for Falspar, and even forced himself to stand and bow when Bate and Atka paid him a visit. Falspar ended up snapping at Alto for not thinking about his health first. He told him that Guardians and Star Warriors are seen as equals, and he shouldn't be acting and behaving like he's not up to par with everyone else. Alto still has trouble accepting this truth, but tries his best for the sake of his master.
Species © Nintendo/ HAL Laboratory
Interpreted characters created from said species © Rhylem