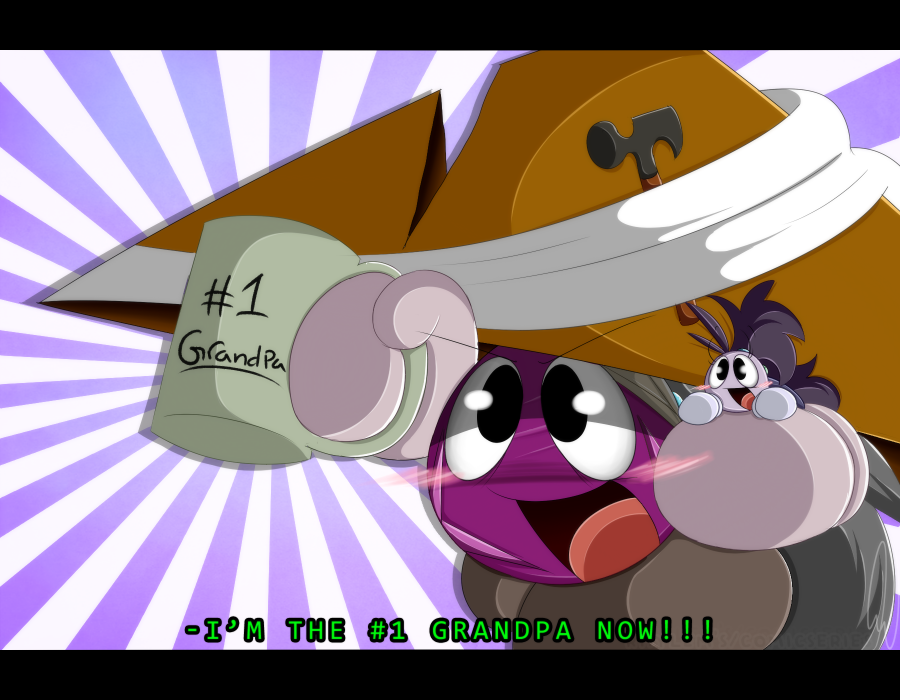 ​It's time for celebration!

It time to party!

"Gampa! Gampa! Gampa!!!" Tula called to the elder who was currently talking with Bate.  Once she finally toddled to the pair, she happily held up a box of his favorite cereal for him. "Happy birthday!!"

"Oh, my precious granddaughter." Ramset gratefully took the box from the Sasuke and lightly patted her head. "This has to be the greatest gift at the whole party! Thank you, gumdrop."

Tula could only smile in joy as she headed back to her parents to tell them what he said. Ramset then glanced at Bate with a slight, pompous smug on his face as he held the box uncomfortable close to his face.

"See that? Look how thoughtful my dear Tula is. She always know the perfect gift to give her grandpa."

"What are you talking about?" Bate swatted the box away in his face and pointed to the table overfilled with the exact same item. "Everyone here bought you a box of that stupid cereal."

"Yes, but you're not Tula, remember." He playfully stuck out his tongue.

'Whatever..." Bate rolled his eyes.

"No need to be jealous, Wheezy." He sneered and headed to the table where all the gifts were at. He gently placed the box with the others and noticed a slightly smaller, wrapped box on the side. Ramset raised a brow, and picked it up to inspect it. There was small tag attached to it, and when he read the messy scribbles on the card, he could've swore his heart skipped a beat.

"My sweet little Tula got me another gift?!!!" His voice rose to an unnecessarily high level that caught the attention at everyone at the party, including Tula. Falspar, who had the toddler in his grasp, walked towards his  overly ecstatic teacher.

"Tula saw this a few months back when we were traveling to Pop Star. She told me you'd love it, so she's been hiding it for quite some time."

"Yeah! It's a secret gift, Gampa!!" Tula chimed in and eagerly told him to open it.  Ramset spend no time waiting and untied the box and lifted the top. A rather loud gasp was heard soon after, and Ramset proudly held the item she bought for him.

"Oh, Tulaaaaa." Ramset's voice began to quiver as he looked over the "#1 Grandpa" mug in his hands.  "Do you really mean it?"

"Hm!" She nodded and wiggled out of Falspar's grasp to nuzzle Ramset. "Of course! You're the coolest Gampa ever!!"

Ramset picked up the toddler and boasted as he held out the mug for everyone to see. "You heard her, everyone, I'M THE NUMBER ONE GRANDPA NOW!!! Not Spikey, not Wheezy, me!!!" He shouted and looked at his comrades who just started back in disbelief.

"Sweet Nova, we're never going to hear the end of this, aren't we?" Bate mumbled to the Gordo as he continued to watch him praise his new gift.
​
-End-
​​​​​​Artist Comment:

Tula gets Ramset one of those #1 mugs....and he kinda takes it a bit seriously. XDDDD Poor Bate and Gordon will have to hear his boasting for the rest of their lives.
Species © Nintendo/ HAL Laboratory
Interpreted characters created from said species © Rhylem