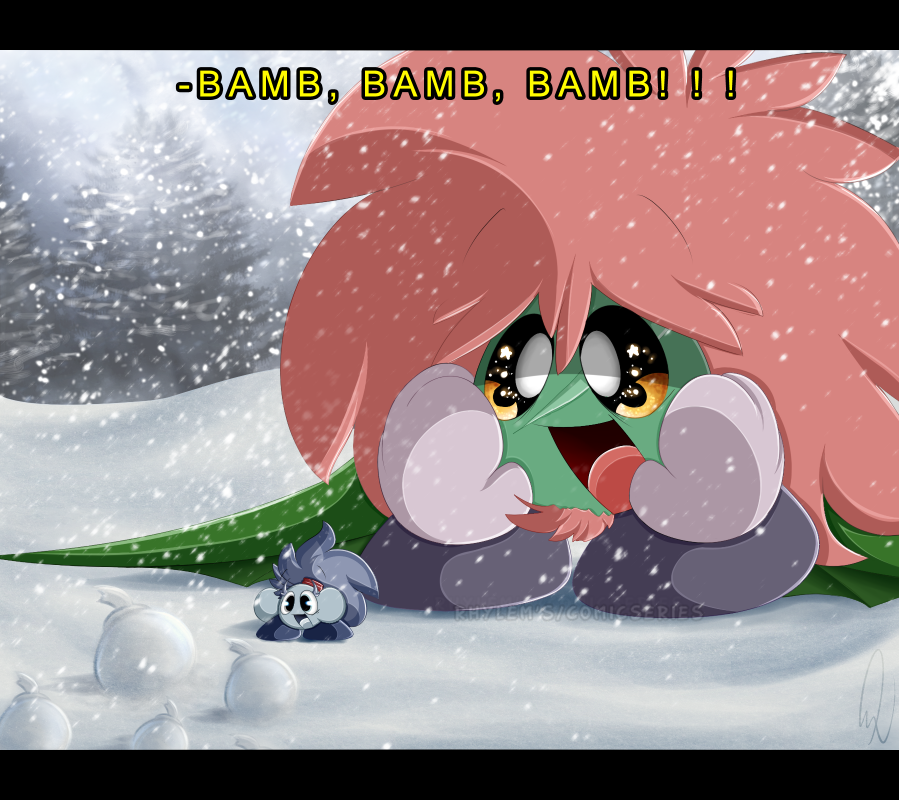 It Runs in the Family
Falspar / Siku

For Falspar, winter time in Kalmari Town always held a special place in his heart- countless hours of playing with his friends and mentors, staying up all night to watch the snow fall, his teacher Ramset making hot chocolate with star shaped marshmallows filled to the brim for them. It’s some of his favorite memories as a kid. Even as an adult, Falspar and his family would continue to make new memories. Tula would always wake them up right after the first snowfall. They would leave their home right after breakfast, and would spend hours upon hours building forts and having snowball fights. Once their fierce battle ended which always results in a tie, the trio would make their way back home and snuggle up near the fireplace to keep warm.

As time went on, things…are a bit different now. Much older than he once was, Falspar prefers to spend the cold season inside; wrapped up in a warm blanket, and enjoying the view from the comfort of his home. He’s not a fan of leaving the house during the cold season, but….there are a few things he’d leave for- his comrades, his husband, his daughter....buying Nova Crunch. Those are a given, obviously. But there is someone in particular will make him practically fling out of his chair in a heartbeat.  One VERY important, SUPER special, ABSOLUTELY amazing-

“Gran'paaaaaaaaaa!!!!” A loud voice rang from the hallway.

“In the living room, ice cube.” Tula called out from the Kitchen while she and Pyrell were busy making lunch.

Soft footsteps could be heard soon after, and a small figure appeared a few moments later. Blue in color like the snow outside, and big floofy hair like her mother, a small child ran to the elder and jumped on his lap. “Gran'pa!!!!” She beamed at the elder and pointed at the window. “It snowed, it’s snowed!!! Did you see?!!”

“Sure did, little icicle~!” He gave her one of his cheeky smiles.” Ready to head out?”

“Yup!!!” She nodded in excitement, practically pulling him out if his chair with all her might.

“Dad, are you sure?” Tula looked their way with an unsure expression. “I don’t want you getting sick, did you already forget what the doctor told you?” She crossed her arms, and then glanced down at her daughter.

“And Siku, we already went over this. How about you head over to Uncle Cellic and see if Rocco wants to play instead.”

“B-but…” Her grip on Falspar’s glove tightened. “We always play outside…."

“Now, now Tula, I’ll be fine.” He waved it off when he sensed Siku getting teary eyed. "Besides, we’ll only be out in the front. If it gets too cold I’ll head back inside, promise.” He reassured.

She eyed the two of them before giving a small sigh of defeat. “Fine, fine- but only until lunch is served, got it?” She said, turning around to finish cooking.

“Sure thing, little plum.” He gave a small wave and followed the other outside into the cold. The freezing air hit Falspar once the door opened, and he stood inside for a few moments to gather his bearings before finally stepping out. The blanket of snow was crisp and untouched, and it gave a loud crunching sound as he made his way to a large spacious area where Siku started to play. Being part Ice Leo, the child is easily able to manipulate the snow around her. Since she’s only a toddler, however, she can only do simple things like build small shapes in the snow. From Stars , to hearts, and even squids- Siku spent the past few minutes showing off her skills to her Grandfather.

“Oh, watch this one!!!” She stood her ground and moved her arms as the snow infront of her feet shifted and swirled into the shape of a flower.

“All the foliage may have disappeared, but your snow flowers are a lovely reminder of what’s to grow once spring appears.” He spoke, smiling brightly at the toddler.

A small blush from his grandfather's praise could be seen soon after. If he liked it that much, then her super secret awesome surprise is sure to make him even happier!!! She ordered him to close his eyes for a few seconds as she began sculpting and forming several blobs of snow nearby. Once everything looked the way she wanted to, she called out for his grandpa to open his eyes.

When Falspar did, and he saw the snow bombs scattered across the floor, he swore part of him died of happiness that day.

"Oooooh, Sikuuuuuuu~!" Tears formed in the elder's eyes as he scooped up his precious grandbaby. "I love it!"

"Little Icicle, you'll be the coolest Ice Leo there is." He agreed full heartedly as he practically raced back home with Siku securely in his grasp to tell the others. Calling out, the other occupants in the home could see the biggest smile he's given in awhile.

"It must run in the family because little Siku here wants to be just like his grandfather!!!" He exclaimed as he moved aside so the others can see what she made.

From Ramset, to Falspar, to Tula and now Siku.....

On this day, Falspar died.....of happiness. XDDD OMG HIS PRECIOUS GRANDDAUGHTER WANTS TO BE JUST LIKE HIM!!!!! =,D

I'm sure you're tired of me saying this, but if you’ve read the Gumball Warrior Family Tree, then you probably know who she is. But if not, meet Siku!! The daughter of Tula and Rupion! AND THE ABSOLUTE PRIDE AND JOY OF FALSPAR AND PYRELL!!! Best Grandpas EVER!!!! 8D

Siku is a hybrid- Half Sasuke and Half Ice Leo. She currently lives in Kalmari Town with Tula and her grandparents. She and Tula will travel to South Nova often to visit Rupion. Unfortunately, Rupion can't visit Kalmari as often due to the temperature. (He will stay during the whole cold season which lasts several months cause he can't bear to be apart from his family for too long.) Tula wants their daughter to experience both worlds, but Siku greatly prefers to stay in Kalmari because she loves to spend time with her cousins and Grandpas! 8D She usually throws tantrums when it's time to leave. She thinks South Nova is boring and not as colorful as Kalmari Town. It...can be a stressful time for both parties. XD

So in regards to her being a hybrid. She does NOT have the same issues as Atticus and Tulok. I mentioned in the description on this old illustration that there is one species that can negate these effects. That species is a Sasuke!! I also mentioned here that Sasukes are natural adapters of even the harshest elements. Little Siku can withstand the freezing cold and the warm season with no problem whatsoever! Knowing this, Falspar and Pyrell made sure to do everything for their little icicle! They would take her out to the beach, all the festivals, strolls through the forest, the candy shop, the toy shop-- just about everything a grandparent would do. XDDD

Being spoiled by them is a huge factor why she doesn't want to travel to South Nova. Pyrell and Falspar have aged on in years, so they're unable to travel with them. Rupion is a single child, and parents died long ago, so Siku doesn't have any cousins or grandparents in South Nova. It gets quite lonely there at times.

When Siku showed interest in explosives, Falspar made it his goal to train her like how he did Tula. He may not be as young like he once was, but he'd do just about anything for the happiness of his grandbaby. <3333