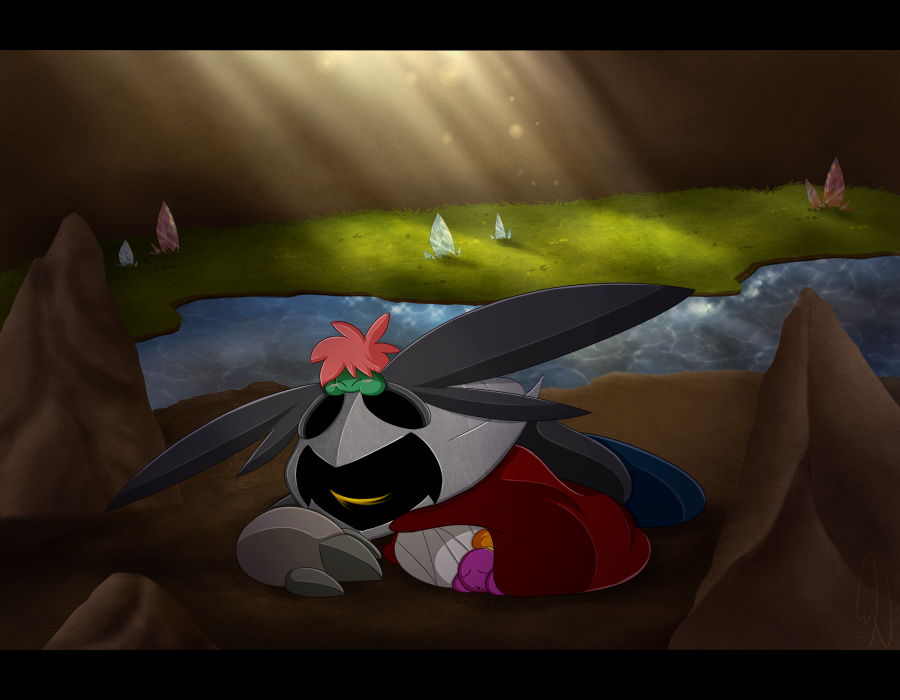 Tears and cries rang as Dragato and Falspar clutched on their teacher for dear life.

Gravel, who told Ramset beforehand how to handle such a situation, unfortunately didn’t follow through to his misfortune. He, Gordon, and Bate watched as all three cried in hysterics from being separated for the next several days.

“Oh, my precious students!” Ramset cried, wiping his tears. “How am I ever going to overcome this surgery without you by my side?!!”

“How about we sneak in with you?!” Falspar quickly chimed, "We’ll hide in your hat so no one could see us!”

“Sweet Nova, why didn’t I think of that!” Ramset smiled from his student's brilliant suggestion as he took off his hat so they could climb in. “Here, hurry up and-"

“Okay, I’ve seen enough.” Gravel cut in and bonked Ramset on the head. “I told you not to be so overly dramatic. You'll only be gone for the next four days so quit sniveling.”

“But Graaaav, aren’t you gonna miss me?!!” He hugged the Bukiset which caused him to slightly stumble back. Mask now glowing, Gravel let out a frustrated groan as he lightly pushed him away. “You know I am, but groveling isn’t going to make it any better.” He then looked at Bate and Gordon who offered to take him to the hospital.

“You’’ll see them in a few days,Ramset. It’s not going to be the end of the world.” Bate finally spoke, trying to hint that it’s time to go.

“It’s easy for you to say, you practically live in the hospital!” He yelled, not caring about being late.

“Y’know…we didn’t have to come all the way out here to help.” Bate mumbled as he started to become annoyed. Gordon placed a hand on his shoulder to calm his comrade before summoning several more to grab Ramset.

“Time to say good bye to your Teacher.” Gordon spoke to the pair as he started to head to the hospital, “He’ll be back in a few days.”

“Dragato! Falsparrrrr!!!” Ramset clawed the ground as he was being dragged away. “Be good while I’m away!!! Take care of Grav for meeee!”

“Shouldn’t that be the other way around….” Gravel hung his shoulders as he watched the two elders take the Sasuke away. Taking a deep sigh, he looked down at the two who were still sniffling.

“Okay, you Par-“ He paused, “I mean….Dragato, Falspar.” He figured it wasn’t the time for his usual snarky behavior. He held out his hand and lightly patted their heads. “Come now, it’s time to head home.”


Dragato and Falspar never spend the night over at Gravel’s place. In fact, it was the first time they really got a look at his home. It’s was quite the opposite of their mentor’s house in Kalmari forest. No trees, no beds….just rocks, stones and even more rocks.

“I have beds for you, don’t worry.” Gravel replied and headed behind several larger ruby pillars to fetch them. He rummaged throughout a few bags he got earlier in the week once Ramset informed that he’d be taking care of them. Pulling out a pair of new sleeping bags, Gravel handed them off to the warriors and motion them to look around their temporary living space.

“Pick anywhere you want.” He spoke, settling in his usual patch of dirt a few feet away to rest. “Just don’t wander too far.” He informed them before closing his eye.

The toddlers stood completely still to take in their surroundings before eventually moving a few minutes later. Falspar inspected the several of the large ruby pillars scattered around the cave while Dragato ventured further and set his new bed next to the edge that overlooked a rather, large underground lake. It didn’t take long for Falspar to follow his comrade, and he gave a small gasp at the view.

“I didn’t know Teacher Gravel lived next to a lake. It’s just like the one Teacher Ramset has!” He slightly smiled.

“Do you think he’ll let us swim in it?” Dragato whispered and looked over the Bukiset who was resting.

“Of course he will! Let’s wake him up so we can jump in!” He eagerly responded.

Before he had the chance to take off, Dragato quickly held on to his wings to stop him. Falspar ended up falling over and yelped out in pain.

“He’s sleeping.” Dragato clearly pointed out. “Do you really want to anger him on the first day?"

"He's not supposed to get angry 'cause Teacher Ramset said so." He smugly stated.

"But...what if Teacher Ramset....."  Dragato's voice began to lower as his fears of something happening to his mentor surfaced. The young warrior couldn't finish his sentence and instead curled up in his temporary bed. Falspar sensed his comrade was worried about Ramset as well and took a seat next to him.

"Teacher Ramset promised he'll be okay." Falspar spoke, trying to lift the spirits of not only Dragato, but of him as well. "Just you wait, he's gonna be fine."

His response was short, but it was enough to send shivers down his spine. Even though Falspar tried to optimistic one Ramset informed him, what if Dragato was right? What if something does happen to their teacher? Will they have to leave their home in Kalmari Forest? Will they have to live with Gravel and train under him? No more jokes? No more staying up late eating Nova Crunch? Falspar couldn't help but begin tearing up at the thought of not having him around anymore.

Both warriors began sobbing once more as they couldn't bear the thought of losing him. In the distance, Gravel slightly sat up and silently watched the toddlers. Sweet Nova, is he really going to deal with those two crying for the next several days? He and Ramset already told them the surgery wasn't that big a deal, but then again...they're only kids. Softly grumbling to himself, the Bukiset stood up and headed towards them. He sat across from the pair, and both toddlers nervously looked at him.

"Why are you crying?" The elder asked, and was responded by soft murmurs barely audible. Having quite exceptional hearing, Gravel was able to make out what they said; even though he already knew the reason."

Giving a small sigh, Gravel reached out to pat each one. "I told you already that nothing's going to happen. He has a higher chance dying from one of his bombs than this surgery, so stop crying."

The warriors continued to cry despite his semi-helpful words. Dragato eventually wiped his tears and lightly tugged on Gravels cape for attention.

"Can we visit right now? Maybe he can come home already?"

"Dragato..." He sighed once more. "No, we can't visit. The operation isn't even until tomorrow."

"W-what?!!" Both replied and began bombarding him with a flurry of questions."

Tuning out their wines, Gravel closed his eye as the two holes of his mask began to illuminate. The cries and shouts of the pair eventually became a distant echo in the cave as they settled down once seeing it. Eventually, the warm illumination of yellow and orange faded, and Gravel opened his eye once more.

"Anytime something troubles Ramset, he'd immediately calms down once my mask lights up. Strange how it seemed to work on the two of you. Then again...." He paused. "You two greatly resemble him. Your mannerisms, your interests, even the way you act and worry when he's not around. It's odd....but you are his students, after all." He softly spoke to the pair. "Look, I understand how worried you must be, but I wouldn't have let Ramset go if I knew he wasn't going to be okay.  He's just as special to me as he is to you. Nothing will happen to your Teacher, I promise." He said, "Do you think you could put your trust in me like you do him?"

The warriors then exchanged glances at one another. Gravel silently waited, and faced the pair when they looked up. "O-okay...." They said.

"Good." He patted their heads once more. Seeing as he did promise to babysit them, Gravel tried to get out of his comfort zone and pointed to the large lake in front of them. "How about I take you little parasites down to the lake so you can go for a swim."

Gravel couldn't help but slightly smile when he saw how happy they got. The pair ran to their luggage and pulled out several inflatable beach balls and toys. "Yaaaay! Let's go!!" They cheered, grabbing Gravel's hand and dragging them to the bottom half of the cave.


"Are you sure he needs our help?" Gordon raised a brow as he continued to follow Bate.

"I'm not sure, but if he's unable to handle both of them then we'll care of the pair until Ramset returns." Bate spoke as he landed in front of the lone cavern.

"Such a worrisome warrior aren't you?" Gordon teased and headed inside.

To their surprise, Gordon and Bate found Gravel quietly resting with both puffs by his side.  Falspar was snugly perched on his helmet while Dragato was burrowed near his arm. The pair exchanged glances and decided there was no need to interfere. Perhaps Gravel is really able to handle it for the next few days.  Once they finally reached the exit, Gordon couldn't help but nudge his old friend.

"Didn't expect that, did you?" He smirked. "A grump who eventually warms up to their students. Now where have I seen that before."

Bate just gave a small huff and stretched his wings before taking off. "Quiet."

Some Gravel and student fluff!! =,D It seems like he's getting used to having those two gumdrops around.
Species © Nintendo/ HAL Laboratory
Interpreted characters created from said species © Rhylem