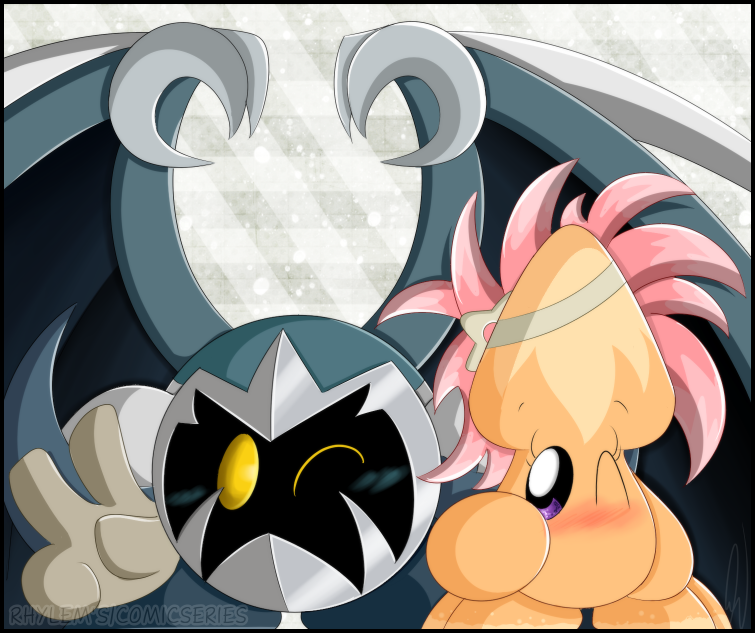 Just a fun little side project. I always drew them as babies, so I kinda wanted to draw out how they’d look like as young adults. >v<

I wanted Kade’s mask to have similar bird features like Bates, but still trying to make it somewhat different. I like it…for now.

Emma hasn’t really changed much except now she has a pink mohawk. XD It’s not really hair, but just a headpiece of feathers. Looks like a mohawk, though.

More written about these two below VV

​-Kade As a young adult-

Kade still holds on to his playful, childish personality. He loves to spend his days flying and, unlike his father, swimming! He studies flight under his father, and trains with his Uncle Gordon and Ramset from time to time. He’s also quite fond of Star Warrior history and studies under Lady Atka when she, and his respective Guardian visit.

Though Kade’s been trained by the three, he doesn’t prefer fighting unless it’s absolutely necessary. (Which is rare since Kalmari’s pretty peaceful) He’s adopted Atka’s kind, caring nature and refuses to hurt anyone unless his family’s in danger. When it comes to Emma, he is very protective over her- proclaiming it’s his duty as a Star Warrior to always protect her. Of course, they still bicker from time to time x)

With all his training and studying, Kade doesn’t have much of a social life. Bate and Ellie encourages the young Puff to go out and make friends, but Kade refuses to listen and would either wander off to sharpen his flying skills.

After a demon beast that attacked Bate while protecting him and Emma, he’s become quite weary and cautious in outer territories. Kade has a huge fear of demon beasts due to the incident, and even with his training, going face to face with one of them will cause the young warrior to cower in fear.

Kade takes the place of Bate’s role as a flight instructor. He now trains young birds or any winged creatures in Kalmari how to fly. He also teaches the history of Guardians and Star Warriors to those who seek to learn more about them.
​

Though Emma wasn’t vigorously trained like Kade, she has adopted some minor fighting techniques from Gordon, but a lot from Ramset. She’s extremely skilled in the use of long range, projectile weapons. While Bate and Ellie don't approve of her using bombs, they both allowed Emma to use Ramset’s knives for target practice instead. Emma, like Kade, doesn’t condone in fighting and prefers using her skills as more of a hobby….and maybe besting her brother in a playful competition of bullseye.

Over the years, Emma’s become fluent in Chirp. She’s able to easily help Kade when he’s having trouble talking, and is the main translator for her brother. She’s also quite protective over Kade when anyone makes fun of his somewhat broken speech. Though she doesn’t like to fight, a situation like this would cause Emma will get physical and knock someone out for teasing him. She claims that only she can poke fun of her brother, and anyone else would have to answer to her fists.

Emma, though not as worrisome as her mother, does think Kade can be a bit too reckless at times. Since she knows Kade hurts himself from whatever stupid stunt he tries to attempt, asked Ellie to teach her the basics of first aid. It’s been handy more than once, she’d say.

Overall, Emma’s considered a jack of all trades. She loves to learn and improve herself;  tending to brag to Kade when she’s able to best him at certain things. She the voice of reason to her brother and will always be there to help wherever she’s needed.
Species © Nintendo/ HAL Laboratory
Interpreted characters created from said species © Rhylem