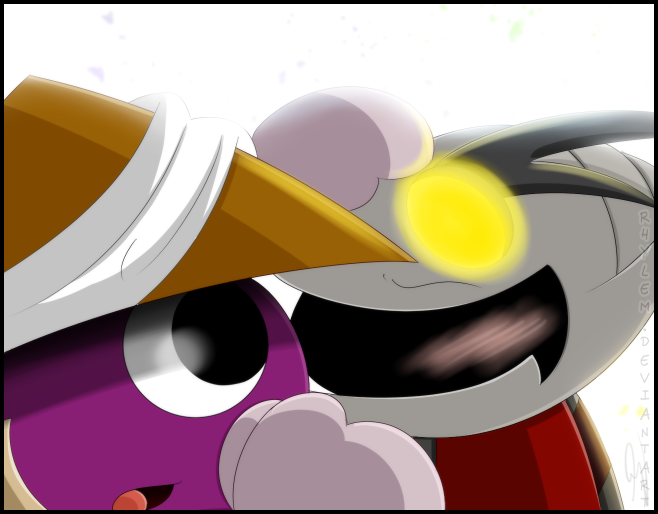 If there was one thing Ramset liked about his new friend Gravel, it was his helmet. More specifically, it was when it lit up. Gravel explained to his curious friend that it glows whenever he's in deep thought. At first Ramset believed him, the mask illuminated a few times when asked certain questions that required more than a seconds thought. However, the more he hung out with the Bukiset, the more he noticed it started glowing at random times. Ramset would question every time it did so, but was always given the same "I was thinking" statement and ended it there. He knew Gravel would never tell him if he supposedly had another reason, so it was up to him to try to figure it out on his own.

Ramset rushed to the Bukiset sitting across from him and clutched his mask with both hands. Gravel, surprised by the sudden physical contact, tried to pull away from his grip, but no avail.

"W-what in Nova are you doing?!!" He shouted, "I don't care how deprived you were as a child, even a numbskull like you should know what personal boundaries are!!!"

"But," The Sasuke inspected the yellow light illuminating the eye holes on top of his friends helmet. "It's glowing again."

"So? I do it all the time!!" He struggled some more and finally broke free of his grip. "You should be used to it already!"

"Ramset, you idiot, I already told you why it glows."

"Yeah, yeah, it's because you're thinking," He mocked the words he was always given as an answer, "So tell me...what were you thinking of then?"

Instead of being given an answer, Gravel started fumbling with his words. He mentally cursed himself; if there's one thing he hates, it's being bested by someone like Ramset for something as stupid as answering a simple question. So instead, he semi-crossed his arms and looked away.

"I don't need to explain anything to you. I was just thinking, so shut-up and leave me alone."

Ramset inched over to where his friend was and placed his hand on the mask again. Gravel, who completely lost control of the situation at this point just sat there, petrified.

"Hm...." Ramset inspected the mask a bit more before eventually sitting down next to his friend. He closed his eyes and leaned up against the stubborn Bukiset.

"Figure something out?" Gravel raised a brow when Ramset didn't say anything.

"No," He raised his arms and shrugged, "Unless you want to tell me something?"

Gravel mimicked Ramset's movements and leaned up against his friends back as well. He closed his eye and let his helmet illuminate again.

"Of course not. What would I possibly want to say to a fool like you?"