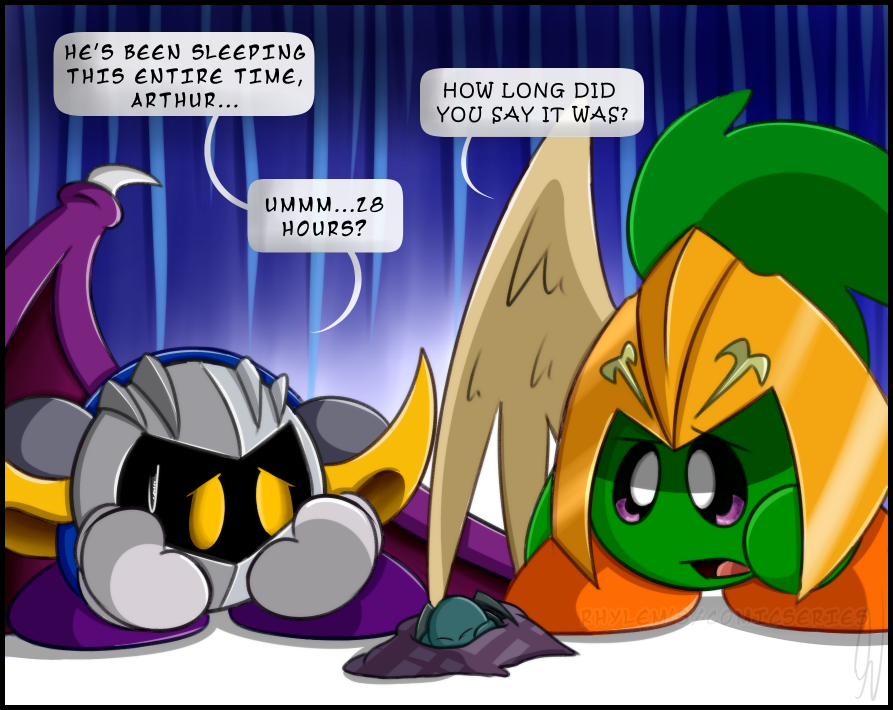 “H-hey!” Meta snapped back and swatted his wing away, “You’re the one who told me to let him sleep,”

“For a few hours!” Arthur barked, “Meta, he's been sleeping for over a day! Don’t you think something seemed off when he wasn’t waking up?!!”

“Quit shouting at me! It’s not my fault you were vague with your instructions!”

“I wasn’t vague! I gave you four simple tasks before I left and you did none of them!” Arthur angrily inched towards his irresponsible comrade, “All you had to do after you woke him up was to feed him, take him a bath, take him to Mends and then put him back to bed! You didn’t even bother to do step one!"

Meta was about to speak but quickly shut his mouth in embarrassment. A small blush formed on Meta’s face when he knew Arthur was right. He focused on the floor and timidly looked at his teacher snuggled in the blanket he wrapped him in. For the entire time Bate’s been here, he has not once budged or even made a squeak under Meta’s watchful eyes. The Navy Puff went over and keeled down next to his mentor.

“Is…he...okay?” He poked him a few times, wondering how it was possible for someone to sleep for this long.

Arthur rolled his eyes and gently picked up the baby Puffball. He heard Bate’s small, shallow breaths followed by a tiny yawn. Arthur gave a smile when Bate proceeded to burrow more into the blanket when his sleep was disturbed. With a sigh of relief that his teacher was okay, Arthur decided to take him off Meta’s hands for the next few hours.

Just a quick little doodle, and a small drabble. All three teachers revert back to adorable little infants, and it's up to their respective students to take care of them.

This one focused on Bate and his two students. Arthur scolds Meta for not taking alarm that Bate's been sleeping for over 24 hours. oAo;
Species © Nintendo/ HAL Laboratory
Interpreted characters created from said species © Rhylem
Story © Rhylem