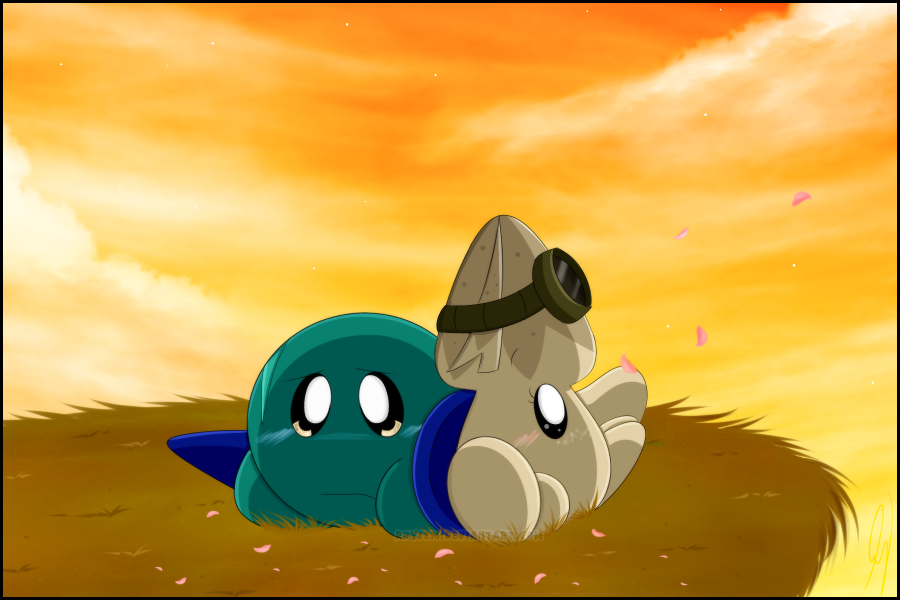 Marlo tore her gaze from the falling petals and looked at the Puffball sitting next to her. Usually he's very talkative after his class, but for some reason he hasn't said a word the entire day. She nudged him a bit to get his attention.

"What's up? Tired from training?"

She waited a few minutes before he finally replied.

"Y-yeah..." He nervously rubbed the back of his head. "Ummm...Teacher Gordon is giving me all these new moves to learn, so yeah....I guess I'm just a bit tired from it all...."

"Oh," She turned around to face him, a bit concerned. "Well, if you want to go home and rest-"

The Squishy held out her hand to quiet him. The Puffball stopped talking and looked at her.

"It's fine, Nonsurat," She smiled and turned around to watch the petals fall again. "We don't need to talk if you don't want to. We'll just enjoy each others presence, alright?"

Nonsurat nodded and fixed his eyes on the floor. He sighed and started contemplating his thoughts.

'If you don't say it now, you're not going to have another chance. Why are you so scared, you're a Star Warrior! You're supposed to be brave. Stop being scared and just say it. Say it!!'

The Puffball slowly reached out his hand and tapped her arm. "Hey, ummm....Marlo?"

"Yes?" She slightly turned to listen.

"Ummmm....I...." He started to hesitate.  The Puffball eventually took a deep breath and quickly spoke what he wanted to say.

Nonsurat waited for her reply, but instead, received a fit of laughter as a response.

"Nonsurat, I have no clue what you said." She continued giggling "Speak slower so I can understand."

"Oh...." The Puffball turned away and softly spoke to her. W-would.....umm....would you please spend the first Summer with me tomorrow?"

The warrior quickly covered his face and prepared for the worse.

'I knew I should've rehearsed it more,' He kept repeating to himself, 'I completely ruined it!'

He slightly opened one of his eyes when he felt her arm brush up against his.

"Nonsurat...." Marlo grabbed his hands and lowered them from his face. She stared into his eyes and smiled at her flustered friend.

"Sure, I would love to spend the first Summer with you."

The excited Puff leaned over and hugged her. She returned the hug and started laughing again.

"You do this every year, Nonsurat. I don't know why you always make such a big deal out of it."

Nonsurat always has a habit of getting all flustered when it comes to Marlo. >v<
​Species © Nintendo/ HAL Laboratory
Interpreted characters created from said species © Rhylem