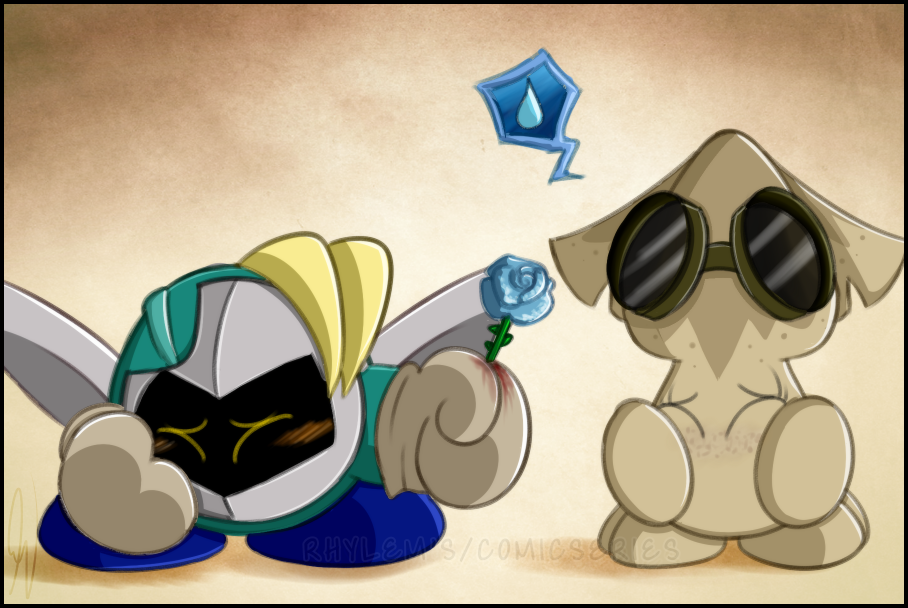 ​​
​“T-this is for you, Marlo,” Nonsurat timidly lifted a brightly colored rose and held it up to his childhood sweetheart. “I, ummm....hope you like it."


“Oh, Nonsurat, it’s lovely, but....” Her voice sounded more worried and concerned than happy and blissful. Nonsurat noticed and started to get nervous. This wasn't the reaction he was hoping for. A million different scenarios were now going through his head from his failed attempt at trying to impress her.

'Oh, no...she doesn’t like it,' He panicked, 'Did I pick the wrong color? Does she hate roses? Is she allergic to flowers? Maybe I should’ve gave her something else! Oh, I ruined everything, she hates it! What am I going to do?'


“Ummm...Nonsurat?” Marlo called out when she saw how distracted he became, “Non, can you hear me?”

The distraught warrior looked away in shame and dropped the lone flower. “I...I’m sorry,” He apologized, “I’ll get you something else if you don't like it.”


“Don't like it?” She questioned. Marlo picked up the fallen rose and gently touched the delicate petals. “Nonsurat, I love it.”


“R-really?” He looked back in surprise, “But you seemed so sad when I gave it to you, though…”

Marlo shook her head and walked over to grab his hand. He looked down and noticed it was covered in blood from when he was tightly gripping the rose.


Marlo knew Nonsurat always had a high tolerance to pain like his Mentor, and doesn’t notice when he’s injured himself. She figured all of those sharp thorns that just cut him had little to no effect. Though Nonsurat brushes off all his injuries like it was nothing, Marlo gets worried that having such a tolerance will ultimately cause more damage in the end. Because of it, Marlo tries to keep a close eye on her friend when she can. The last thing she’d ever want is for something horrible to happen because she wasn’t paying attention. Marlo looked at the flustered Puffball and gave him and concerned, but loving smile.

“While I appreciate the kind gesture, Nonsurat, maybe we should get your hand tended to first.”


“I know you didn't,” She took his other hand and led him to the infirmary, “Just be careful next time alright?”

She slightly laughed and playfully nudged her comrade,

"You’re quite charming as it is, and I don’t need anymore gifts to prove me otherwise."

Nonsurat has a dangerously high tolerance to pain. Something along the lines of congenital insensitivity to pain (CIPA). He’s unable to feel anything when he gets injured, which gets Marlo concerned, like, a lot!

Anyways, here’s Non's stab at trying to be romantic....it ended up landing him in the infirmary for the next ten or so minutes, however.  ;;
Species © Nintendo/ HAL Laboratory
Interpreted characters created from said species © Rhylem
Story © Rhylem