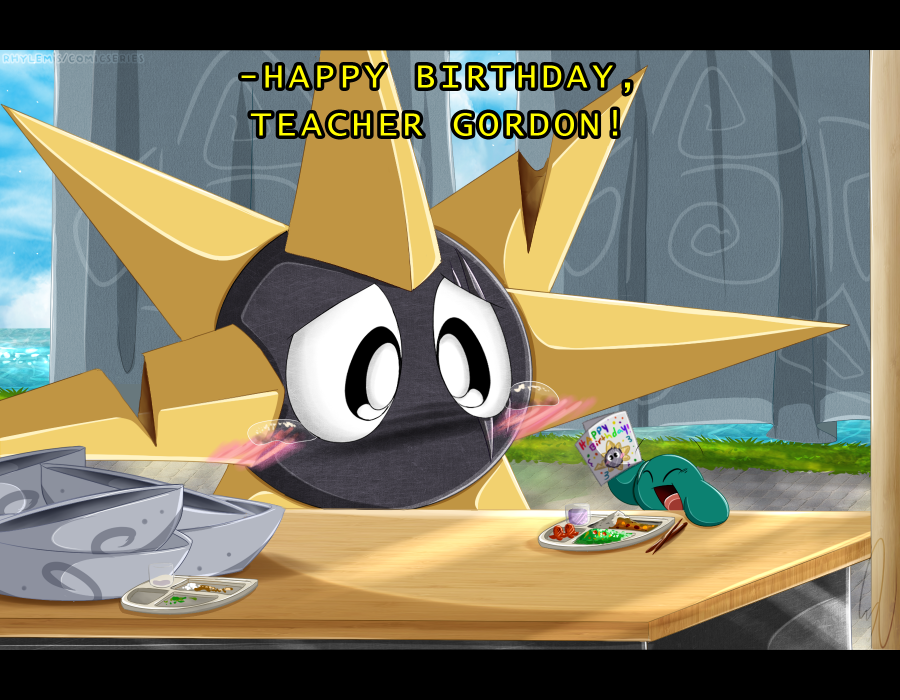 To The Greatest Teacher Ever!
Gordon / Nonsurat

“Wow, it was sure nice of Teacher Bate to treat us to lunch.” Nonsurat smiled as he happily chomped away at his lunch.

“Be sure to thank him when we see him again. I’m sure he’ll appreciate it.” Gordon spoke, placing his empty bowl to the side.

It was a shame Bate couldn’t join, but he recalled Meta and Arthur making quite a ruckus last time he took them to this restaurant. Gordon was sure he didn’t want another incident playing out, so Bate paid for their meal upfront and reassured the two they could order anything they want. Nonsurat was surprised he  was offered an all you can eat lunch as well, since it wasn’t his birthday they were celebrating.

“Oh! I got you a gift too!” Nonsurat turned to his side and pulled out a small, handmade card. “Here! Happy Birthday, Teacher Gordon!” He held the gift up high, a smile beaming on his face as he waited for his mentor to take it. It wasn’t anything amazing like Teacher Bate’s gift, but he hoped he’d like it just the same.

Gordon summoned one of his specter hands and took the card his student was eagerly waving. Looking at the front, it was a drawing of him with large colorful letters that spelled out “Happy Birthday.” Opening it, the old Gordo couldn’t help but tear up when he read what was inside.

“To the greatest teacher ever.” He spoke out loud. “I remember being scared and running away when I first joined your class because you were really scary looking. I was wrong for doing that because you are the nicest, kindest teacher there is. I’m so glad I'm your student.  -From Nonsurat!”

Gordon reached over and gave a small pat on his head. A faint blush appeared on the Puff from his teacher’s acknowledgment.

“Thank you, Nonsurat. I’m pretty lucky to have such an amazing student myself. I’ll be sure to put it in a safe spot once I get home.” He said, placing it to the side.

It’s been a long time since he received a gift that had a…childish air to it. The last time he recalled such a thing was when he was raising Jr. His cheerful features soon faded once his mind started to wander. He truly misses the days of raising and training his son, but Nonsurat, in a small way, makes up for his past mistakes.

It has been many years since the incident, and now he has someone to watch over and protect. He knows Nonsurat looks up to him, which is a feeling he’ll never get tired of. Nonsurat depends and relies on him, and he swore to always be there for him no matter what. He wasn’t going to let him down like he did to Jr. If his son is still out there…somewhere, he hopes he knows how much he regrets what he did that day.

Gordon glances to his side to see Nonsurat digging into another helping of curry. He couldn’t help but smile once more. There was no use in dwelling what could’ve been. Yes, he’s made mistakes in his past, so the only thing he could do now is learn from them. For the sake of him- Nonsurat.

“Hey, we still have dessert to get. What’s a birthday celebration without some ice cream?” Gordon spoke.

“Wha-Really?!!!” The child spoke with excitement. “Can we really get some after?”

“Only if your appetite is up for it.” He teased, knowing this was Nonsurat’s second plate.

“Yaaay!” He cheered, setting his utensil down to quickly hug the Gordo. “You’re the greatest, Teacher Gordon!”

'I…really like to think I am too…' He thought to himself unsurely.  'But…'

He watched as Nonsurat pulled away to finish his meal- a smile still brimming on his face.

Happy Birthday, Gordon!!!! A little drawing of him and Non for the occasion~

And yes, it's the same restaurant from this illustration~ XDDD AND the other illustration is when Nonsurat thought Gordon was scary and ran away.