After the loss of his mentor and the near death of his best friend,
Bate, Gordon is truly afraid of being alone in the world. He will do
everything to protect the few he holds so dear to him. He does tend
to be extremely protective over Bate in some cases, especially when
​it comes to his health.

Gordon never studied defense growing up. He thinks that being a
Gordo, a one-ton steel spiky ball, makes him invincible to any
attack.  Even though he has several scars from previous battles,
Gordon will always deny that he needs training in
that specific area.

Gordon cannot swim and will end up sinking if fallen. It will
be next to impossible for anyone to lift him so the fear of
​drowning will forever loom over this poor Gordo. 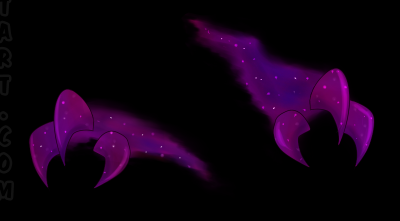 Gordon has the unique ability to summon several specter-like
hands. *Besides Gordon, there are two others who can preform
such an ability: Bullet and Gordon Jr.

He's able to wield many weapons and also uses them
for other things like cooking and cleaning.

Even though Gordos don't need food to survive, Gordon found cooking
strangely appealing. Out of his group of friends Gordon's the best chef
of them all and loves to cook meals for them. When Falspar showed
​interest in cooking, Gordon mentored him in his free time as
well as anyone else who was interested.

Gordon is one of thousands of Gordos created in Central Crux. The sole purpose
of a Gordo's existence is for war. Creators believe they are the perfect object to
create mass destruction/inflict great damage when shooting at an enemy.
Gordon, however, was the lucky one left behind to test new weapons the
company was making. Gordon spent his life wielding all different kinds of
weapons the company provided him each day. Through years of fighting,
studying, and weapons testing, Gordon became an expert in the
fine art of weaponry.

Gordon's purpose was to be used as a test subject as he
is one of only two creatures able to create hands. He was
left behind to be raised and tested on by his creators. Bullet,
however, took his place. The Blado pleaded with the creators
to use him instead of Gordon. Creators decided to spare Gordon
for the time being and use Bullet until a fatality occured. Bullet lied
to Gordon and said he was left behind to study and test weapons.

At the age of 2,000, Gordon fled Central Crux and ended up in North
Nova. He was found by GSA recruits while traveling through the
sandy region and ended up joining soon after.

While training, he met Bate who he took pleasure in tormenting and
bullying after the Puff called him "cargo" by mistake.  After injuring
Bate severely one day Gordon greatly apologized to the warrior for his
​horrible actions over the months, and eventually befriended​ him when Bate
gave him a second chance.

After an incident in East Nova that left Bate unable to fight
​in the war, Gordon left the army to stay by his side. To this
day, he's still by Bate's side and will continue to be there for
for him. Both currently live together in the Town of Kalmari
​and teach their new students together.

Despite his intimidating appearance Gordon has a very caring air to him. He is
seen as outgoing, very talkative, and always welcoming to those who introduce
themselves. When it comes to his friends, family, and students, Gordon is
isn't afraid to be harsh at times when it comes to their safety. He can
also be very strict when rules are broken which causes him to go on
long lectures.

​Sir Bate
​
Gordon was paired up with Bate when he joined the GSA. Bate
was glad to have someone to talk to, but Gordon, however, could
care less. Gordon hated Bate with every fiber in his body and tried to
hurt him with every chance he got. Eventually he ended up severely
injuring Bate. Being alone until Bate recovered, Gordon truly realized
how lonely he was. Flashbacks of his childhood and his dear mentor
brought the Gordo to tears. Besides Bullet, Bate was the only one
who actually tried to befriend him. Realizing this, Gordon regrets
hurting Bate and hoped he'd forgive him for his cruel actions.


Bate avoided Gordon after he recovered and said it was a mistake
thinking they could ever be friends. Gordon begged Bate to forgive him,
saying he had wished he never done such a thing in the first place. Months
passed until the Puffball fully trusted him again. Gordon vows to always
protect  and cherish the only friend he has left. This decision lead him
to leave the GSA to take care of Bate when he got  injured in East Nova.

Gordon values the friendship he and Bate share and will always be by
his side whenever he needs it. He considers Bate like a brother and
is extremely protective if anyone tries to hurt him. Gordon can also
be a bit over-caring anytime Bate gets hurt or sick, which causes the
Gordo to stay by his bedside until he's well again.

Gordon was on the verge of killing the Sasuke when he found him attacking
Bate. Even though Ramset apologized, Gordon warned him to keep his distance
from Bate or else he'd kill him. Eventually, Bate told Gordon to give him another
chance seeing as it was just an accident. Bate told Gordon that he gave him another
chance when they first met at the GSA, so why not Ramset. Gordon gave in and
accepted the Sasuke's apology. As of today, both are really good friends
and share a tight friendship.
​

A battle scarred Blado whose creators gave him Gordon to raise and watch over. Being trained by him at a
young age, Gordon not only saw him as his mentor but his father as well. Bullet taught Gordon everything to
know about weapons until his untimely death which left Gordon to fend for himself. Both also share the same
​ability to create  specter-like hands.

*When meeting Bullet for the first time the Blado gifted him
the name Gordon, as Gordo #7943 didn't sit well with him.

-He's nearsighted in one eye.

-He dislikes hospitals
with a passion.

-He has a bad habit of
drinking thanks to Alba.

-He wears headgear each night to
help maintain his bite.

-He is absolutely terrified of spiders and will
freak out if one is in close proximity to him.
​
​
Species © Nintendo/ HAL Laboratory
Interpreted characters created from said species © Rhylem