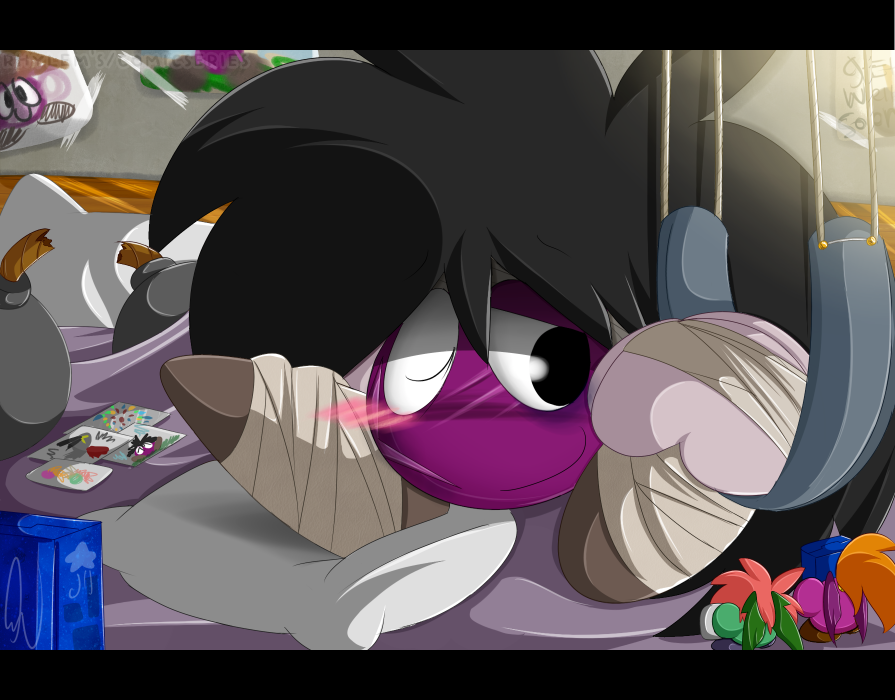 Dragato and Falspar retracted their arm from the handle of the door, and turned around to face the Bukiset looming over them.

"I...ah....we....." Dragato began, before Falspar finished it for him when he heard him starting to stammer.

"I just brought him home not even an hour ago. Can't you little parasites find another way to occupy your time that doesn't involve bugging him?"

"B-but..." Both held up several drawings and a box of Nova Crunch for him. "We just wanted to give him our get well gifts."

"I'm pretty sure the other, several dozen gifts you made for him were enough." Gravel stated, but noticed the sad faces on the pair soon after he spoke. The elder couldn't help but give an annoyed groan from their protective, worrisome nature over their teacher. He decided there was no point in keeping them away. If he were to leave, those two were bound to try and sneak back in.
​
"Fine, fine, enough with the sad eyes. But if I find you two causing him more pain than he's already in, you'll be forbidden to see him until he’s fully recovered, got it?"

"Hm!" Both happily shook their heads and ran in once Gravel opened the door. The Puffs toddled to the bed where their mentor was resting. Soft snore could be heard, and both warriors exchanged glances.

“He’s sleeping,” Dragato whispered, “Maybe we should come back lat-“

“Teacher Ramset!!! We brought gifts for you!!!” Falspar’s loud voice shook the Sasuke awake, and he softly groaned in pain from the jolt. His sore expressions were immediately hidden when he saw his two students next to him, however.

“Falspar, Dragato,” He weakly smiled at the pair, “I didn’t expect you to visit so soon.”

Ever since he was admitted to the hospital, Dragato and Falspar refused to leave his side. Both would arrive extremely early, when Mends would allow visitors, up until visiting hours ended late at night. Gravel, who stayed with the Sasuke, couldn’t help but notice his recovery moving quite slowly due to being constantly woken by the pair, or having to move around because they wanted to play with him. Of course, Ramset never had the heart to shoo them away. They were his precious students for Nova’s sake!  Even if he was in tremendous pain, Ramset knew they did everything for the sake of making him smile. Once he returned home, the pair was determined to continue visiting until he was able to walk once more.
​​​​​​Artist Comment:

Precious students are visiting Ramsetttt! His whole room is filled with get well gifts they made for himmm! But maybe let your mentor rest, he's still very sore from the fight. =,D
Species © Nintendo/ HAL Laboratory
Interpreted characters created from said species © Rhylem