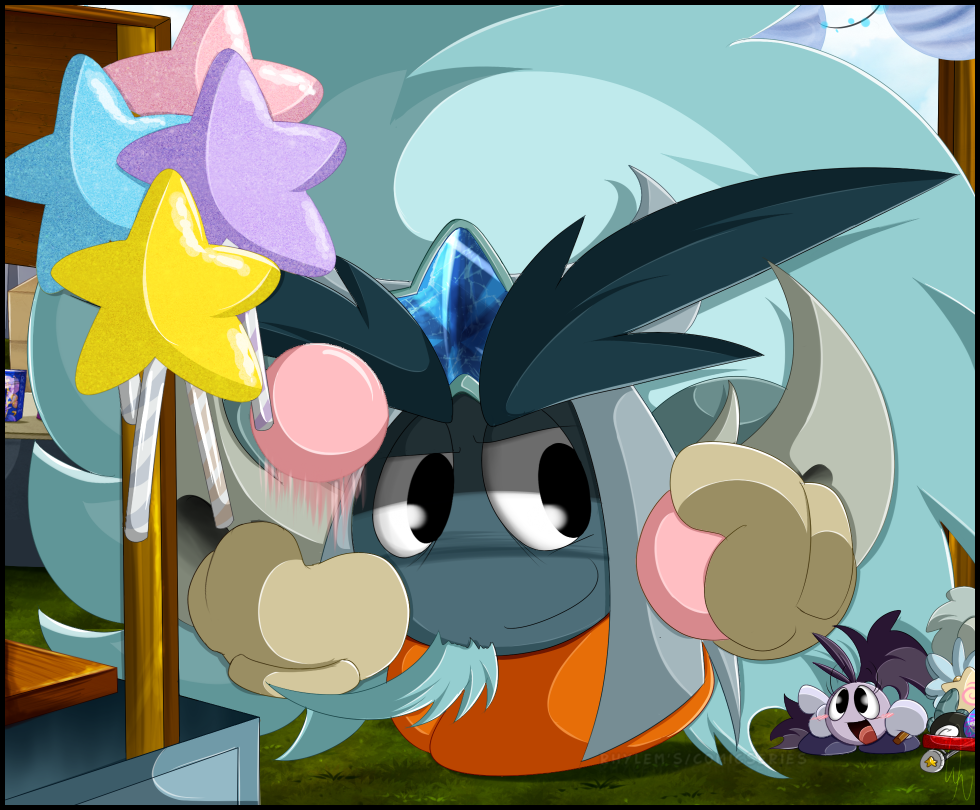 With a sparkler in each hand, Tula happily waved them to the passing bystanders as she tried to motion them towards her dad's firework stand. "You can't celebrate without some of my dad's famous, handcrafted fireworks!!"

Throughout the day, Tula helped sell their stock of fireworks she made with her dad several months back. Falspar couldn't be happier his daughter was following of the footsteps of not only him, but his late mentor as well. He and Pyrell watched as their little plum try and get the attention of anyone who passed by. The Leo slightly nudged his partner when a few walked over to talk to her.

"Quite the salesman, huh?" Pyrell proudly watched as she toddled over to the stand as she sold yet another box of sparkler wands.

"It reminds me of my younger years." Falspar beamed as he remembered the times he and Ramset would venture off and sell the fireworks they made together. Once she handed off the box, and collected several bronze coins from the group, she ran back to the pair.

"We sure did, little plum!" Falspar patted her head and took the coins Tula held out for him. He gently placed them in the cash box, and then proceeded to hand her a small stack of silver coins. Tula looked at them in slight confusion until he spoke.

"You've helped at the booth long enough, sweet heart. How about you and Fireball play some of the games they've set up?"

Nova knew he always wanted to play games after working, so he figured his daughter was the same.

"REALLY?!!!" Tula's eyes shined and she clutched on to the coins for joy.

And he was right.

Falspar softly chuckled she eagerly tugged on Pyrell's glove so they could play. "C'mon, Daddy! I wanna get lots of prizes!"

"Just don't set any booths on fire." Falspar teased before receiving a playful punch from Pyrell.

"Oh, boy! What should we do first?!!" Tula eyes all the colorful stands. Each one had a unique prize with an equally unique game.  Some looked extremely easy like popping a balloon with darts, and then there were challenging looking stands where she may need the help of her father. Tula continued to scan the booths until one quickly caught her attention.

"How about that one?" She pointed to a stand that had several rows of baskets. The pair greeted the owner and explained the game of successfully getting the wiffle ball in the basket without it bouncing out. Tula happily handed over the coins in exchange for 5 balls. One by one Tula tossed it in hopes it'll stay. Unfortunately the game was much harder than it looked, she was already down to her last ball!

"I didn't know it was gonna be this hard." She softly spoke to herself and looked up at Pyrell. Maybe it would be best if she left this to an expert. "Daddy, do you wanna try?" She held it out for him. "Maybe you could win!"

"Hm?" Pyrell took it from her hand and looked up at the basket in front of him. He's played many games in the past as Falspar had a habit of wanting to win all the prizes when they were dating. He slightly smiled how similar they were and decided it's time to polish his skills once more. The Leo took a few steps back, carefully held out his hand, and lightly tossed it. To Tula's surprise, he got it in!

"Congratulations!" The owner clapped and handed him a large, star shaped plush. Pyrell handed it to his daughter and received a hug in return. Now knowing his father was a pro at carnival games, she decided to take him every booth at the event.

Tula let out an excited squeal when her father easily knocked over the tower of milk bottles. It was their 10th win in a row! "You're the greatest, daddy!" She happily cheered, hugging his side once more.

"Anything for my little plum." Pyrell couldn't help but give a prideful smirk from his winning streak, and proceeded to pick her up so she could get a better look at all the prizes. She scanned the various plushies and toys to choose from, before pointing to a rather large plush shaped like a flower.

"Oooh, that one!!" She beamed and eagerly held out her hands to grab it from the booth owner. Tula snuggled the stem of the plush, and looked up at her father. "Do you think cousin Atti will like it?" She tried her best to smile when she mentioned him since he unfortunately fell ill several days prior, and couldn't join them this year.

"I'm sure he'll love it." Pyrell reassured his worrisome daughter, and set her down next to her wagon so she could add the plush to the ever growing mountain of prizes he's won for her, and her cousins. Tula grabbed the handle once she was done, and followed the Leo to the next booth. Her eyes gleamed with joy when she saw the large, inflatable star rods and pointed to them.

The owner slid two rubber balls to the pair, and pointed to the row of jars behinds him. “Just break one of the clay pots, and it’s yours!”

“Only one?” Pyrell grabbed the balls, and glanced at her daughter with a sly smile that could easily rival his husband. “Be ready to add two more points to that winning streak, sweetie.” He boasted as the sound of several jars breaking was heard soon after.

'Cause when he’s not using his strength and skills to fight off demon beasts, HE’S WINNING TONS OF PRIZES FOR HIS LITTLE PLUM!!!

Tula is never short on stuffed animals and toys. She has so many thanks to the ol’ Fireball.
Species © Nintendo/ HAL Laboratory
Interpreted characters created from said species © Rhylem