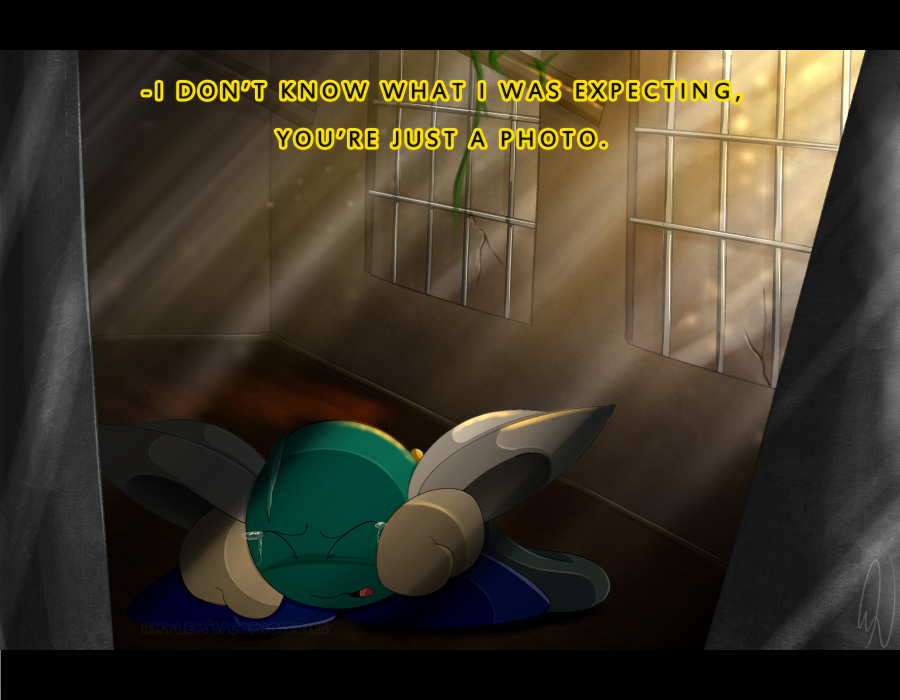 -What I Wouldn't Do-
(Sir Nonsurat)


​
The house was quiet aside from the footsteps belonging to a warrior by the name of Nonsurat. It was an eerie silence he's learned to accept after the tragic incident that left him, and his beloved wife, distraught, and heartbroken. There was a time where the house once clattered and echoed with the sound of tools and engines which, needless to say, caused a huge ruckus in their small town. Loud thumps of boxes being stacked, slams of metal doors being shut, and the final sound of a propeller going off as both took off into the sky to deliver cargo and other various items several towns away.

Much time has passed, and many in town wondered if they quit their jobs as pilots since the sound of their plane rarely made its presence anymore. Only a few who were acquainted with the pair knew the reason behind it, and although it was less than pleasant hearing those propellers at 4 in the morning go off, they would do just about anything to hear them once more....

“I…I’m gonna make a small run to a few towns over. Would you like to join me?” Nonsurat gave a faint smile to the other as he entered their room. It’s been so long since they traveled together, and even though he expected the same answer like before, part of him hoped she’d reach out, take his hand and say yes.

“No…..” She quietly whispered from her place in bed, not turning around to face him to avoid further conversation. “Y-you go on ahead, Nonsurat, I’ll....be fine.”

Her voice cracked with each word, and Nonsurat knew she’s been crying again. He took a step closer, and sat on the bed to join her. He gently reached over and grabbed her hand, and didn’t speak another word as the couple sat in silence. He knew how the loss affected her. He knew how distraught and depressed she became, and how she would constantly blame herself for the death. No matter what he would do, nothing he did or say seemed to helped her.

“Do....you think he would’ve been a pilot like us?” She finally spoke , and wiped her tears as her mind started wandering once more, “Would....he have been a fighter like you?”

“Marlo…I…..” His words came to a halt as he started to choke up, and realized he found himself crying as well.

Why couldn’t he have been there in time? Why didn’t he go with her? He would’ve been able to protect her. Their family would’ve been safe.

She would be happy…

He would be happy….

Unable to bear the thought of it anymore, the warrior stood up and walked towards the door. He gripped the handle, and taking a deep breath, spoke one last time before walking out.


“Teacher Gordon, would....it have been different if you were here?” Nonsurat spoke to the picture of his late mentor in hopes, somehow, he'll tell him the answer he needed. When nothing came, Nonsurat gently placed the photo back on the shelf as he gave a rather loud groan that echoed through the old, dusty shed.

“I don’t know what I was expecting, you’re just a photo.” He mumbled as more tears started to fall.

“Yes, I don’t think a photo would do any good, now, would it?” A voice spoke, but Nonsurat hardly reacted to it.

“I suppose...” He turned around and faced the old warrior near the entrance. “I just....if he were still alive-“

“But he’s not, Nonsurat.” Bate eventually walked in and tried to disregard how unkempt and dirty everything was. “There’s no point in thinking what could’ve been, you know that.”

“I know...” He gave a troubling glance at the untouched plane he used to fly with Marlo. When was the last time they took a ride? Nova, he can’t even remember....

Bate followed his gaze, and reached over to touch the old machine. “It’s been awhile since I woke up to the sound of it.”

“Plan on taking it out today? I’m sure it’ll enjoy a good polish.” Bate said, referring to his glove now covered in dust.

“No, n-not today...” He sighed and motioned the warrior out since the last thing he wanted was to get the elder sick.

“We haven’t had a job in months, Teacher Bate, unless by some miracle we get business again, I think....selling the plane would be for the best...”

“That’s...unfortunate to hear.” Bate frowned. He certainly didn’t expect to hear that from him. “I know how hard you and Marlo worked to purchase it.”

“Yeah, well....there’s no point if we never use it anymore.” He carelessly spoke, his mind still troubled from the conversation he had with his wife earlier.

"You still could, if you wanted to.”

“And for what?” Nonsurat spoke with a ting of annoyance from his persistence, “If it doesn’t make Marlo happy, then who cares. ”

Bate quickly picked up on it, and gave a small sigh. He knew this was was more than just the plane, or their failing business. Everything that led to this point in time was all because of one thing. He knew, of course. He once acted and behaved the exact same way, but this time....Gordon wasn’t here to help his student like he did to him many years ago.

Bate straighten his pose and placed a firm hand on the shoulder of his old student. “Nonsurat, listen to me. This isn’t your fault. This isn’t Marlo’s fault- none of it is."

“Constantly thinking of the ‘what if’s’ or the ‘what could’ve beens’ is no way to live."

Nonsurat heard him pause for a moment before eventually speaking again.

“Your son…..” Bate, this time, spoke in a stricter tone. “Thinking of ways you could’ve prevented the loss will not bring him back. I know….I’ve…”

He stopped once more, and Nonsurat felt one of his wings wrap around his side to hug him. “Let’s just say I know what you’re going through right now....”

Clutching on to his wing for support, Nonsurat eventually broke down from the weight of all that’s happened, and started to cry. “It hurts, Teacher Bate. It hurts so much…..”

“I know, and there’s always going to be a part of you that hurts when you think about it.” Bate spoke.

The young warrior hung his shoulders and gave a small sigh. “M-Marlo hasn't left the house since the funeral. I've been trying so hard to get her through this but....nothing I do seems to help. I just want us to be happy like before. If...I could just see her smile, just once, then....maybe....just maybe we'll get past this...."

“It’s going to take much time for her to move on, Nonsurat.” His tone started to lighten up. “Each loss effects us in different ways. It may take longer for Marlo, and the best thing you can do for now is be there for her. Comfort her, protect her, and in time, she will slowly get better."

Nonsurat felt Bate’s wing leave his side as the elder stepped a few feet away. He gripped his cane and sightly lowered his wings.

“You have endured so many losses, Nonsurat, please don't think you and Marlo need to bear this on your own. It truly is a shame Gordon's not here to help when you need him the most...." The warrior sadly spoke when he brought up his dear friend. "I know I may not be your ideal choice to go to for these kind of things, but if you or Marlo ever find the need to talk about it, well....just know I'm always here if you need it."

Again, silence filled the air. Bate tiredly closed his eyes and decided to give the warrior some time to his thoughts. He was nothing like Gordon, true; he will never be able to fill the void when Gordon comforts him, but part of him wishes Nonsurat will take his words to heart. As Bate began to stretch his wings, he suddenly stopped when he felt a pair of arms hugging him from behind.

“I....know you will." The warrior whispered. "Thank you, Teacher Bate.”

The elder relaxed a bit when he heard those words, and turned around to return the hug. When the tears of both warriors finally started to subside, Nonsurat motioned the old Puff to the shed.

“I….know I may be asking much, but….” The young warrior spoke, and looked up at the elder. “Could you….help me fix up the plane for Marlo and I? I think….I want to take it out for a fly today.”

“Is that so?” Bate’s eyes changed to a bright yellow for a brief moment. He patted the young warrior’s head and made his way to it. “Of course, let’s get started."
​
-End-

This takes place some time after this illustration here.

The couple has taken the loss of their son extremely hard. Marlo’s become depressed to the point where she stopped working, and because of it, their business has declined greatly. Nonsurat tries his best to deliver smaller packages on his Warp Star, but it unfortunately wasn’t enough to keep the business going. It was during this one-shot where he started to debate selling the plane for cash so they could support themselves a bit longer.

Although their bond isn’t as strong as Gordon, Bate does his best to be there for his student. The elder has been through the exact same thing. There were days where he wondered if things could’ve been different if he was there to protect Ellie. Of course, he knows thinking about what could’ve been will never bring the ones he loves back.

This is also a time where Bate tries to fill the role of the other teachers. So if he sounds a bit awkward or nervous, it's because he's not used to bonding with the others like this. He will eventually do the same to fill the void for Ramset. Every student is different, so Bate has much to learn about each one when it comes to comforting them.
Species © Nintendo/ HAL Laboratory
Interpreted characters created from said species © Rhylem