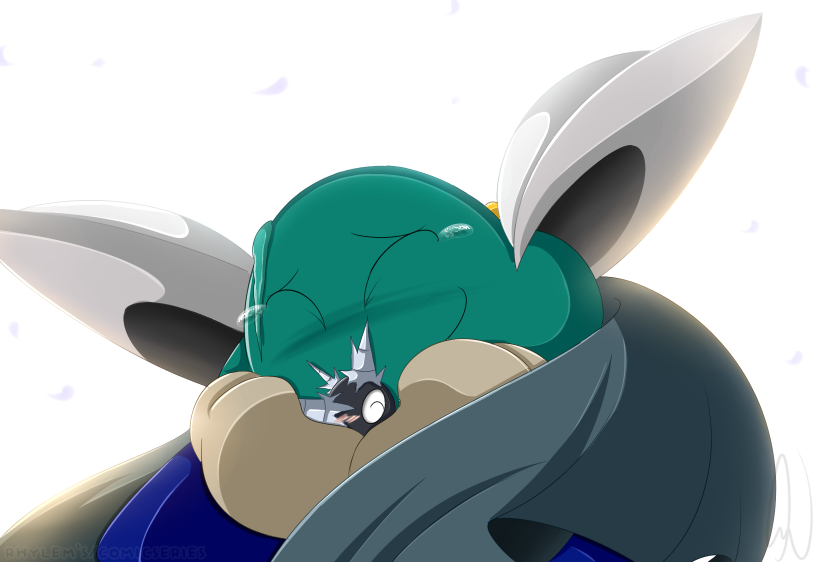 "Oooh, how about this one?" Tula pointed to one of Atticus' flowers. "It's blue, just like his hair!"

"Those are blue del....delpha....delphiniums," Atticus spoke several times as he tried to pronounce it like his mother,. "But, ah...are you sure you don't  want to check the other beds? This is only the first one we've seen. I have lots more you can look at."

"Thanks, Atti, but I think my parents would love this one!" She eagerly responded.

"Well, if you say so." The small Leo gave a nod and began cutting several of the stalks for her. Once finished, he handed them off to his cousin

"Thank you so much, Atti!!!" The toddler gratefully replied. "Now my Father's Day breakfast will be complete! They'll just love the flowers when they walk into the kitchen, I know it!!"

"I'm glad to help." He smiled back and waved goodbye to the Sasuke as she ran back home to put them in water. Once she left, the Leo glanced at the other next to him. "Did you want me to get anything for your dad, Cellic?"

"Oh? Did you already buy him something?" He curiously asked. "It's your first time celebrating father's day with him, right? I'm sure you got him something super special."

"My mom told me about it this morning, but...." He gave a troubled frown as he lowered his gaze to the ground. "I don't think he'd want anything from me."

"Hm?" Atticus scratched his head in confusion. He never pictured his Uncle Nonsurat to be the distant type. Anytime he sees him and Cellic together, he always seems so happy. Did something recently happen to them?

"Cellic, of course he'd want something from you." He began to comfort the Gordo. "What would make you think he wouldn't in the first place?"

The once cheery, bubbly Gordno now completely turned away from the Leo when he was asked that. Would his cousin truly be able to understand? His situation was nothing like his. But...Atticus was his cousin, he promised when they first met that he'll always be there for him. Even if he may not fully understand, maybe just talking to him would help. He was a good listener, after all.

With his voice but a whisper, Cellic softly spoke. "It's because....I'm not his real son. "

Atticus' wings drooped from the answer. Not his son? Is that what he really thinks when he's around his parents? He never realized Cellic felt this way when it came to them. He always boasted how awesome they were, sorta like how Tula does with his dads. Tula couldn't wait to celebrate it with her parents, so he couldn't understand why Cellic would feel the complete opposite. He took a few, cautious steps forward to reveal a very teary eyed Gordo.

"Please don't cry, Cellic." He frowned and reached up to wipe his tears. He stayed and comforted is cousin until his tears and small sobs started to let up. Once Atticus felt like he was able to talk again, the Leo spoke.

"Uncle Nonsurat and Aunt Marlo talks an awful lot about you when they visit my mom and dad." He said. "They sound like any other parents and I'm positive they love you just the same. Did...ummm...something happen?"

"Of course you're different.You're a Gordo!" Atticus giggled, "But just because you don't look like them, doesn't mean they don't love you. Tula isn't a Leo like his dad, but he still loves her, same with Uncle Falspar."

Sensing how torn he still was about this, Atticus nudged his side, and directed him back to his home. "Well, if you won't believe me, talk to your parents and see for yourself." He smiled and gave him a reassuring grin."Everything will be fine, I promise!"

"But how do you know?" He shyly faced the direction of his home. "What if they end up getting mad if I tell them?"

"They're your parents, and it's their job to help you. If what you say is true, then they wouldn't bother listening or even acknowledge your feelings. And I know for a fact they would never do such a thing." Atticus, once more, reassured his cousin, and pushed him towards his home. "You'll see! Nothing to worry about!"

"I hope so.." Cellic thought to himself as his cousin continued to push him.

"You spoil me, I swear." Nonsurat beamed as he took a bite of the strawberry pancakes Marlo made for everyone. "What did I do to deserve such a wonderful wife?"

"Don't give me all the credit, Cellic helped gather the berries for me." The Squishy giggled and glanced at her son.

"Correction, what did I do to deserve such a wonderful family." Nonsurat mimicked his wife and happily smiled at the toddler. Of course, with the incident regarding the conversation Cellic had with Atticus, the Gordo couldn't help but shy away from them. He only gave a small nod from the complement and focused on his plate.

"Sweetie, you haven't touched your breakfast, is something wrong? Are you not hungry?" Marlo spoke when she noticed his unusually quiet state. Cellic's appetite could easily rival his father, and yet not a single bite was taken.

"Tired?" The Puff raised a brow. "That's the first time I heard you say such a thing." He set down his fork and glanced at him as well.

"Y-yeah, well...." The Gordo started to get nervous from the sudden attention of the two. "Training from yesterday was a bit hard and, ummm.....I...."

From his side, Nonsurat  stood up and headed to the quivering figure. He gently held the Gordo and looked at his spikes. "You didn't crack anything did you?" He spoke, inspecting each one. He made sure to always be gentle when it came to training him. Did he accidentally strike him too hard? Dear Nova, maybe he should've waited until he was older.

Cellic's face began to flush as he tried to pull away. "I'm fine, I promise."

"C-Cellic, please stop wiggling. I don't want you to injure yourself even more."  He tried to steady his grip from him.

"Sir?" Nonsurat repeated, scratching his head. He only called him that when they first met, why would he be calling him such a thing now? "Cellic what's this all about? Did I do something to upset you today?"

"Dear...." Marlo placed a hand on his pauldron when she figured it had to do what they talked about yesterday. "I think Cellic's just a bit nervous because it's our first time as a family spending Father's Day together."

​He slightly perked from hearing that, and shyly lifted Cellic to his level. Sweet Nova, he was getting worked up over that? The elder Puff couldn't help but crack a smile. "Well, thank the stars it wasn't an injury or anything. You had me quite scared, son."

"S-son?" He softly whispered which was just enough for the couple to hear. Nonsurat's expression suddenly shifted when he heard him say that.

"Of course you're my son." His tone slightly stricter than before. "Did someone say something to you? Is that why you've been so nervous?" He spoke.

"No, but...." Cellic decided there was no point in hiding it anymore. He could only drag on for so long until he's trapped in a corner. Eventually he faced the pair, trying not to cry. "It's true, though...I'm not your son."

"Yes, you are." Both parents spoke in unison, cradling the Gordo.

"Cellic, you're just as much a part of our family as anyone else. Don't ever think you don't belong here because you do." Marlo spoke, looking up at Nonsurat for support.

Nonsurat didn't speak and instead headed to the living room. He grabbed an old photo album from the shelf and lifted it so Cellic would be able to see. "My father didn't look like me or your mother." He spoke, flipping through a few pages. "In fact....he sorta looks like a certain Gordo I know."

"H-huh?" Cellic took a glance at the image an saw there was a rather large Gordo floating where an extremely young looking Nonsurat was. Wait...his dad was a Gordo? Really?

"He still saw me as his son." Nonsurat finished, giving a nod. "He raised me, he trained me. When I was sick, he never left my side. When I was sad, he was always there to wipe my tears. I was everything to him, and he was everything to me." He explained. "And I want you to have the same, too, Cellic. Now it's my turn to be the father- to protect and watch over you. Because you're not just a Gordo...." He spoke, hugging him.

Cellic knows he doesn't have to question where he belongs anymore. He has his two protective parents to watch over him, and he couldn't be happier. ;v;
Species © Nintendo/ HAL Laboratory
Interpreted characters created from said species © Rhylem