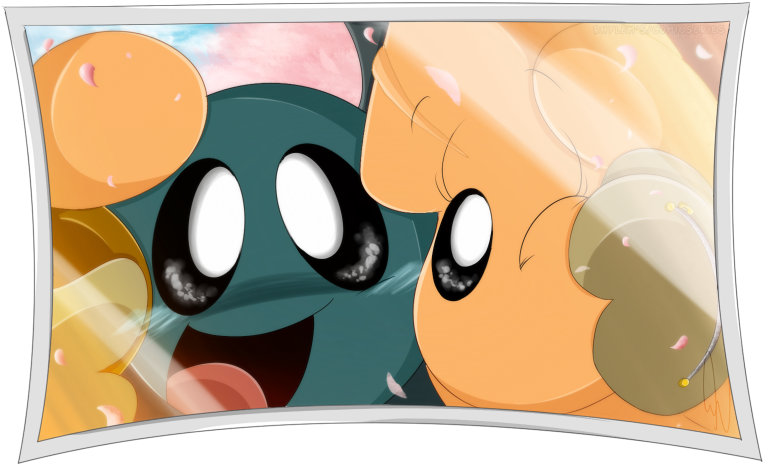 You Only Live Once
Bate / Ellie / Meta

“Teacher, you look funny in this one too!!” Meta’s voice rose in volume when he couldn’t stop giggling at another picture of his mentor.

“Gumball…” Bate sighed in annoyance and covered himself with his pillow to drown out his student’s constant laughing. “If you’re just going to laugh every time you see a photo of me in my awkward teen years, then the exit is to your left. Sweet Nova, how many times to I need to keep telling you to quit looking through my personal belongings when you decide to keep me company?!!”

"Awwww, Teacherrrrrrr, you're no fun." Meta whined and set the loose photos back in the box.

"Tell that to the pin in my leg." Bate slightly snapped in frustration, and gave a much needed sigh from the thought of being bed bound until his leg and wing healed. Meta has been quite routy ever since he returned home, and it was starting to make him wonder if staying at the hospital would've been a better choice. Sure, Meta would 'try' and behave, but after a few minutes engaging in conversation, the little warrior would always try to get him to play or walk. Obviously, it resulted in excruciating pain when Meta forced him out of bed. It's only been a week, and Bate isn't sure if he could handle several more months like this.....

"B-but....Arthur and I already apologized..." Meta quietly murmured with a ping of guilt still lingering when he brought up his leg. His boisterous, happy features greatly dimmed as he turned away from his teacher. He honestly didn’t know what else to say to him to accept his apology, so he just quietly sat by Bate’s side and didn’t speak a word.

Bate uncrossed his arms when he noticed Meta and felt equally guilty soon after. He knew the pair didn’t mean to hurt him since it truly was an accident…..a very, veeeery stupid, irresponsible accident might he add. Seeing as the last thing Bate wanted was to lose his student's somewhat enjoyable company, the elder reached over and lightly patted his head.
"I know, I know," He said, easing up on the harshness of his voice. "I guess I'm just a bit restless from sitting around all day."

"But you do that anyways, even before you fell...." Meta teased which got him a rather playful tap on his forehead from Bate soon after. With the pent up tension now cleared between the pair, Meta went back to looking through the box....though this time keeping his mouth shut so he doesn't irritate his mentor.

He'd asked him a few questions anytime he found something interesting that caught his eye. Since Bate never really opened up to them before in the past, it was quite nice to have him talking about his younger years as he was slowly becoming more comfortable about it after the lot started living with him.


“Oh, was this how Miss Alba’s bar looked like before it became the candy store?” Meta asked as he passed the photo to him. Meta saw Bate smile fondly at the old picture of him and his friends, and he leaned towards the box when he realized pictures of his days in Kalmari were in them. Since said box was stored in the attic, he wondered when was the last time his mentor saw these.

“It was. Wow, it’s really changed over the years, I almost forgot what it looked like back then….” Bate mused as Meta shifted through more photos. The more he dug, the more photos of his younger years started to appear. Since he only had a few photos around the house of him and his other family, Meta was very intrigued whenever a picture of them popped up. He’d quietly look at a few while handing them to Bate since he was interested in them as well. It was only until he found something scribbled on the back of one of the photos did he speak up.

“You..only live…once?” He tried be best to make out the writing. When Bate heard those words, he set aside the current stack he was looking through and tried to lean over to see the image Meta was holding.

“Teacher?” Meta looked up and handed it to him, “What does it mean?"

Once he took the photo from his student, Bate’s eyes softened at the sight of the photo of him and Ellie. Both smiling and laughing before the shot was taken.

Even though it’s been decades since it was taken, Bate still remembers the precious moment they shared like it was just yesterday.

“It means….” Bate pondered when he said those words that day. Meta listened carefully as the elder began to speak.

“I guess for me, it’s means to live life to the fullest.” He spoke, reminiscing back to the day it was shot. “The both of us left Kalmari for a bit and explored our home of West Nova. We…ah…got ourselves into many predicaments.” Bate couldn’t help but laugh at all the shenanigans they got themselves into while traveling.

“Eventually, we ended up finding a remote area that homed many acres of Plum trees. I can't even put into words how many there were. As far as the eye can see, Gumball, they were a sight to behold. The area constantly rained blossoms to the point where the whole land became a warm shade of pink.” Bate closed his eyes from the fond memories they spent there. It...was truly the perfect ending to their last chapter spent together. "That…photo was the last picture we took before we ran out of film.”

“W-what? So you don’t have any photos of the trees?” Meta scanned throughout the box in hopes to find one.

Meta followed Bate’s eyes when he looked out his window. In the distant sat a lone plum tree, and Meta focused his attention back to his Mentor.

“I’d hope so.” He slightly chuckled, “That’s were it originally came from."

Meta had no idea. He just assumed it was just…’there’ from the beginning. Now thinking back, he always did see his mentor sleep under said tree or visit it from time to time when he wasn’t teaching.

“Wow, usually I’d just take a stone or a feather as a souvenir, but you took a whole tree!” Meta beamed in amazement that he was able to do such a thing.

“Well, it’s been over 2,000 years, Gumball. The tree was much, much smaller.” Bate slightly rolled his eyes when Meta actually thought he’d carry a fully grown tree with him back to Kalmari. “But yes, Ellie and I loved that place so we decided to take part of it with us so we’d always remember that day. After the film was developed, I guess she wrote what I said during our travels since both of us planned to visit that area again.”

“Well, did you take photos that time?” Meta asked, though he assumed it was probably in another box since he couldn’t find a trace of pink petals anywhere.

Meta glanced at Bate when he set the photo aside and rested himself back on his pillow. “Unfortunately not.” He said, not really wanting to dive into further explanation. “Anyways, I try to visit when I’m able- usually when they bloom. I…don’t believe I’ve taken any photos, though. If I did, I probably never bothered to develop them since I go every year.”

“H-huh? So are you planning to see them this year, Teacher??” Meta said when he mentioned that he still visits. “Can... I go too? We can take a bunch of photos like how you and Miss Ellie did!”

“Gumball…..” Bate tried to speak but Meta didn’t let up.

“Just like that quote you said when you were younger!”

“I want to go on an adventure with you, too, Teacher! It’ll be fun, just the two of us.”

“Teacher?” Meta looked over and noticed he seemed distracted after his little plea. He slightly nudged him, but he didn’t respond.

The elder closed his eyes and gave a small sigh. A faint memory echoed as he remembered the day he presented the idea of traveling to his wife in the first place.

Nova, the Star child really has a habit of making him a giant pushover....

Eventually, Bate placed a hand on Meta to get his attention. “You do realize you're still grounded for not picking up after yourself y’know. Obviously, there’s not going to be any adventuring while I’m recovering.”

Meta gave a silent nod. He figured that'd be the case. Mends said it'd take a long time for him to recover, and he and Arthur were grounded until he got better PLUS an extra month....

A small, excited squeak was heard right after he spoke those words, and Meta happily jumped on the bed whilst trying to hug his teacher.

"O-ouch! G-gumball stop moving so much!" Bate cried as all his jumping caused his wing and leg to ache.

"A-ah, sorry, Teacher!" Meta quickly jumped off of the bed and finished his little celebration dance on the floor. "That...won't count against me...will it...?"

"Don't worry, you're fine." Bate said, and motioned him to the door. "I won't be so lenient next time, so I expect you to behave yourself and let me finish my recovery in peace." He spoke with much emphasis.

"O-okay, I promise." He said, going up to Bate one last time to hug him. It'll be hard not to bug him until he's recovered, but traveling to an unexplored land with his Teacher would surly be worth it in the end. He released his embraced and smiled brightly at the Puff. "It'll be so much fun, I know it will. Thank you Teacher."

"Yeah, well....." He gave a small shrug and tried his best not to be equally excited as well. He glanced at the photo on his nightstand while a small smile started to form.