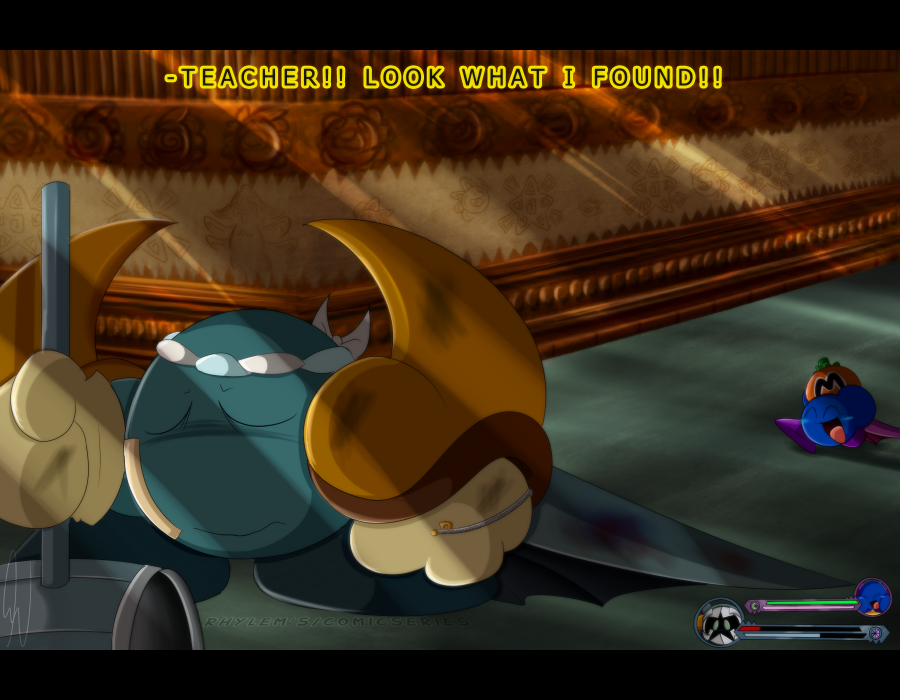 Meta cheered when the plume of dust finally cleared from the battlefield and Bate was the only one left standing. Chameleo Arm, the boss of this area, was nowhere to be found, and Meta crawled out of his hiding spot to congratulate Bate. As he was running to tackle him, Meta noticed his teacher slightly swaying back and fourth before kneeling on the floor in exhaustion. Meta let out a startled gasp and picked up his pace.

“Teacher?” Meta slightly nudged him to get up, “Are you okay?”

The elder winced from the multiple wounds he received from the monster. It was a tougher battle than the other two he previously fought, and Bate was finally starting to feel winded from it all. Bate looked over at his student and motioned him to take his backpack off. With all the treasures they found, SOMETHING had to be useful to cure his aching body.

“Gold Metal…..Beast’s Fang…..Fish fossil…..Sweet Nova, what are we going to use a Lucky Cat for?"

Bate let out a frustrated groan when he was unable to find anything and tried his best to get up. The next world had to have something. Another resting area, some place to recover- anything! He had to get out of here; There was no way he was going to succumb to these ruins. He promised Meta they’d find a way out of this world. He promised he’d get them back to Kalmari…..

“C-c’mon…." Bate tightly gripped his hammer and used it as support to get up. He took a few, sluggish steps forward before kneeling back down again to rest. It was no use- he was completely fatigued.

Meta looked around the large room in hopes to find something that’ll help his mentor. Ususally when Bate defeats one of the larger monsters in this strange, unusual world, random food suddenly appears, and it replenishes their health greatly. Meta knew one had to be around here, he just had to find it…..


Bate rested on the floor to recover from the tolling battle while Meta was exploring, but for some reason…..he was still tired.

This world was strange…..

The ability to rest and recover isn’t….normal. If one were to recover, you’d have to eat the food this world provided. Bate didn’t like the idea of it one bit. It didn’t make a lick of sense to eat and magically have your wounds and energy levels back to normal. It doesn’t work like that in his world, and it certainly shouldn't work like that in general. Then again, he recently fought a giant computer virus, so maybe eating food for recovery isn’t as strange as it seems…...

Bate tiredly sat up when he heard his name and looked over to see Meta carrying a large tomato. In fact, this particular tomato is the best item to find as it completely recovers you from all injuries and ailments. The little warrior smiled brightly as he headed to him,

Bate gave a rather annoyed sigh and forced himself up. “Meta, why didn’t you call me over to pick it up!”

Meta set the tomato down next to his mentor before responding, “Y-you seemed so tired. You couldn’t even move so…..”

“I would’ve got up if I knew there was food there!” Bate snapped, not happy with the dire circumstances sitting between them.

There was another thing…..

Another thing about this world Bate absolutely loathes……

“You know I can’t eat it once you’ve touched it.” Bate tiredly rubbed his temples. His last chance at recovery was lost. He’d have to travel to the next world now to replenish his health.

“S-sorry, Teacher.….” Meta quietly spoke, completely forgetting the rules of claiming food in this world, “We can share it, if you want….”

“Absolutely not,” Bate spared no time letting the idea sit with him and trudged forward.

"B-but you won't be able to make it to the next area!" Meta slowly followed as Bate was moving at a snails pace, "C'mon, birds do it all the time!"

Bate just rolled his eyes and continued to the mine carts that lead to the next world- ignoring his student to partake in such a horrible healing process.

Time for another "The Great Cave Offensive" illustration!

This time Bate and Meta reach the Old Tower. Bate defeated Chameleo Arm but suffered a lot of damage from the battle. Meta ended up finding a Maxim Tomato but forgot the extremely important rule of 'sharing." Bate wants no part of it so he shall trek on to the last, and final area in hopes to find more tomatoes there. >u<;
Species © Nintendo/ HAL Laboratory
Interpreted characters created from said species © Rhylem