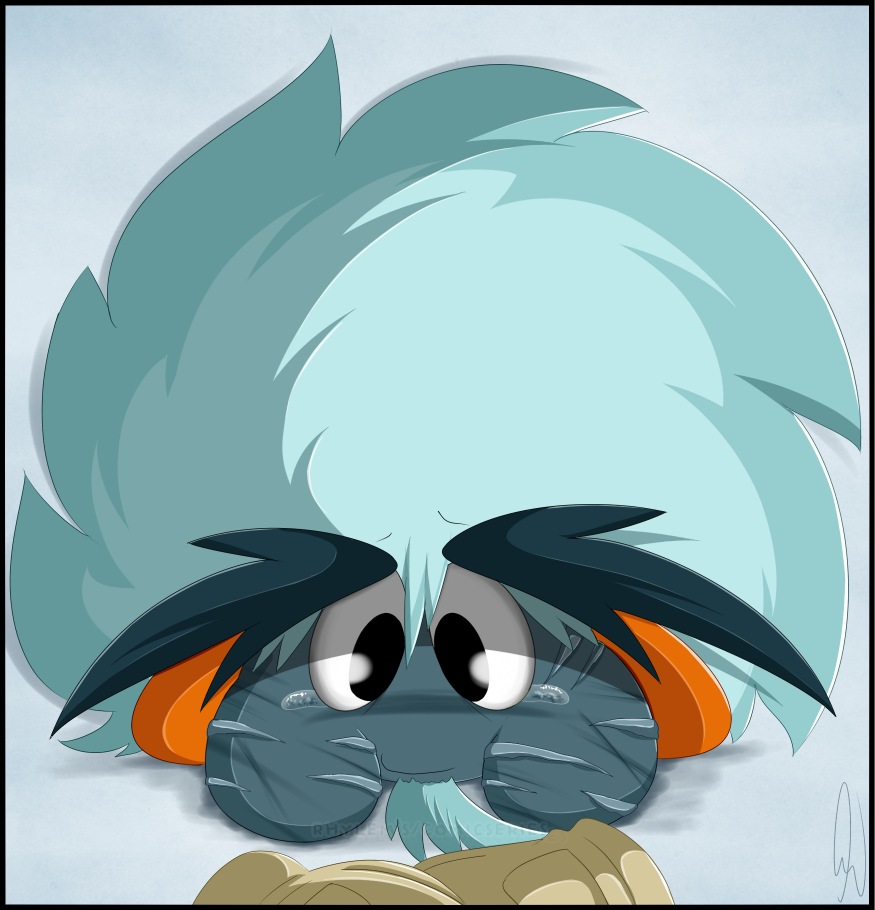 Falspar gave an uneasy look when his husband started to speak, and he placed a hand on his shoulder to slightly pull him back from the store owner.

“I said 2 weeks.” He repeated, grabbing the Leo’s hand to look over the item in question. “As I said before, our gloves aren’t fire proof like yours. I can ship them to an old friend who is able to fulfill your request, but it’s going to take some time.”

“But for two weeks?” Pyrell couldn’t believe how long it was going to take to get them done. He quickly pulled his hand away, and shook his head. “Could it be done, perhaps…..tomorrow?"

The store owner just gave a tired sigh and looked at Falspar. The Puff took the hint, and decided to butt in.

“It’s going to be fine, Pyrell. We’ll ask him to make several pairs in advanced so nothing like this ever happens again, alright?”

“I know, I know….but don’t worry.” He held up his hand to hush the tearful Leo, and motioned him to take off his worn gloves. “It’ll be fine, I promise.”

“There’s nothing to worry about, Sir Pyrell. I’ll send them out today, and inform you the minute they return.”

“A-alright….”  He spoke in a defeated tone, and turned way from the pair as he removed his gloves to leave on the counter.

“They will be in good hands, I assure you.” He softly smiled at the worrisome warrior, and headed to the back room to pack them for shipment.

“See? Nothing to worry about! Now c’mon, Pyrell, let’s go get something to eat. I’m sure it’ll take your mind off of…..h-huh?”

Falspar looked around the now empty shop and quickly dashed to the exit when he realized Pyrell left.


“S-sir Falspar, I do suggest taking your head out of the recycling receptacle this instant. The bystanders are starting to stare.”

“But Alto! I can’t find Pyrell anywhere!” Falspar pulled his head from the trashcan and dashed to another. “And I don’t care if everyone stares at me, just help me find him!”

“That’s what I’m here to report.” He used his tails to grab the warrior out of the bin. “He’s back home. He…..seemed quite frustrated, and slammed the door to his room before I even had the chance to greet him. Did something happen?”

“Ah, yeah, kind of….” He spoke as he dusted himself off once Alto set him down. Both started to head back to their home while Falspar was explaining to his Guardian of their problematic situation.

“So, what do you suggest we do?” Alto asked. “I’m pretty sure he’s not planning on leaving his room anytime soon."

“I don’t know….” He quietly spoke, and pushed the front door to let them in. “I didn’t think he’d take it so personal. He was arguing with the store owner for well over an hour, but I finally convinced him to let them go.”

“Sir Falspar, he doesn’t even take them off for the simplest of tasks- When he’s sleeping, or eating, and I’m pretty sure he keeps them on when he showers. Surly you noticed he has some sort of attachment to them."

“Of course I know.“ He huffed at his Guardian and sat up to head to their room. “Lemme, just…I dunno, talk to him for a bit. I’m sure I’ll be able to lift his spirits once I get him to start talking."

“I do hope so, my master.” He gave a small nod and left it up to his other half.

Falspar slowly opened the door to their room and noticed Pyrell sleeping, or rather, moping in bed; both his hands were snuggly tucked under his pillow. The Puff tip toed to the opposite side of their bed to join him.

“Y’know, I’m sure if you don’t think about it, the two weeks are gonna fly by so fast.”

Pyrell didn’t respond, which made the Puff poke his side.

"C’mon, Mr. Gloomy, they’ll take good care of your gloves. Me, my comrades and even our teachers never had a problem with them before, so you can trust them, okay?”

Eventually, the Leo pushed himself up, and Falspar couldn’t help but frown when he saw how sad he was.

“Hey, hey-  what’s with the tears?” The Puff forced a smile, and reached over to wipe them. “I know they’re special, but moping around isn’t going to bring them back any faster. How about you and I go out to eat to take your mind off it, hm?”

“Awww, don’t be like that.” Falspar nudged him harder. “Please?” He continued to push before Pyrell eventually shoved back when he felt the Puff trying to grab his arm. Falspar inched back from the shove and nervously rubbed his hand.

“Would…you like to talk about it?” He asked, still keeping his distance after his unusual outburst. “P-Pyrell, you know I love you, right? If there’s something’s troubling you, I want to help. That’s what we do, remember? We help one another."

Eventually, Pyrell gave a small nod, and shyly glanced at the Puff. “Do you think….you could do me a favor, then?”

“Hm! Of course!” He beamed when he finally got Pyrell talking. “If it’ll make you feel better, then sure!”

“O-okay…” He started to hesitate, but eventually asked his request when Falspar flashed him one of his confident smiles to ease his nerves. “Could you close your eyes and hold out your hands?"

Without questioning it, Falspar closed his eyes and raised both hands for him. Falspar could hear the creak of the bed as Pyrell sat up more. Once he sensed the Leo was sitting right across from him, he felt his gloves being removed. After a few seconds of having them off, Falspar felt a pair of hands above his.

“Your hands, silly.” He smiled.

“Different?” Falspar thought to himself. He deiced to place one of his hands over Pyrell’s to get a better feel, and noticed it did feel slightly unusual. It was very coarse- nothing soft or smooth like his, or any of his comrades. As he continued to move up, he felt many ragged scars that quickly caught his attention. The Leo pulled away when he noticed Falspar getting concerned, and grabbed his pillow to hide his arms once more.

Falspar opened his eyes, and saw that Pyrell was avoiding his gaze.

“Is that why you’re so eager to have your gloves back? Pyrell, you have nothing to be embarrassed about, they’re just scars. Sweet Nova, you really had me worried for a moment, Fireball.” He spoke and reached over to remove the pillow. Of course, feeling and seeing were two completely different things for Falspar, so when he proceeded to discard the pillow, he didn’t realize how badly scarred they really were. What he thought were only 2 or 3 scars turned out to be more than he can count.

Pyrell noticed the sudden shock on his face when he saw them, and lowered his head to silently gaze at them.

“I’m…sorry I never told you about them, Falspar. I guess....I would rather just forget about them, rather than talk about them.”

He reached up and rubbed a rather large one on his left arm. “Each one has such a terrible memory of my old home. W..Where I was beaten and abused by....h-him. M…my father.” He struggled saying the last part. "And every time I look at them, all I can see is some scared, helpless child who let it happen.”

“Pyrell, you were just a kid. You couldn’t have possibly stopped it. None of it was your fault, you never asked to be put in that situation.” He spoke and reached over to grab them. He gazed over at his rugged and battered arms with a small frown.

He had no idea it was this bad. Sure, he remembered Drani vaguely telling him they came from a rather abusive household, but she never mention Pyrell was beaten to the point where his hands were almost unrecognizable. And even after everything he’s been through, Pyrell was still haunted by them. Now he understood why he was so attached to his gloves, and why he wanted to hide them from him, or anyone else who got in his way. He figured Drani was the only one who knew about it, but since her passing, he has no one else to talk to, or even comfort him about it. Was this the first time he’s told anyone besides her? If that was the case, Falspar knew he had to do something.

Falspar finally released his grip and embraced the other whilst trying not to cry as his husband was already in tears.

“No matter what he’s done or said to you in the past, Pyrell, please don’t ever forget what I told you today."
-End-


Yes, even when they are already married, this is the first time Falspar really got a good look at Pyrell's arms. The Leo's done quite a good job hiding them until his gloves got too worn and he needed to get them replaced. As mentioned before, Pyrell doesn't like to talk about his scars since they bring up some really painful memories when he was younger. >x<;;

​Falspar, being the totally amazing husband that he is, comforts his other half when he realizes how much those scars effect him.