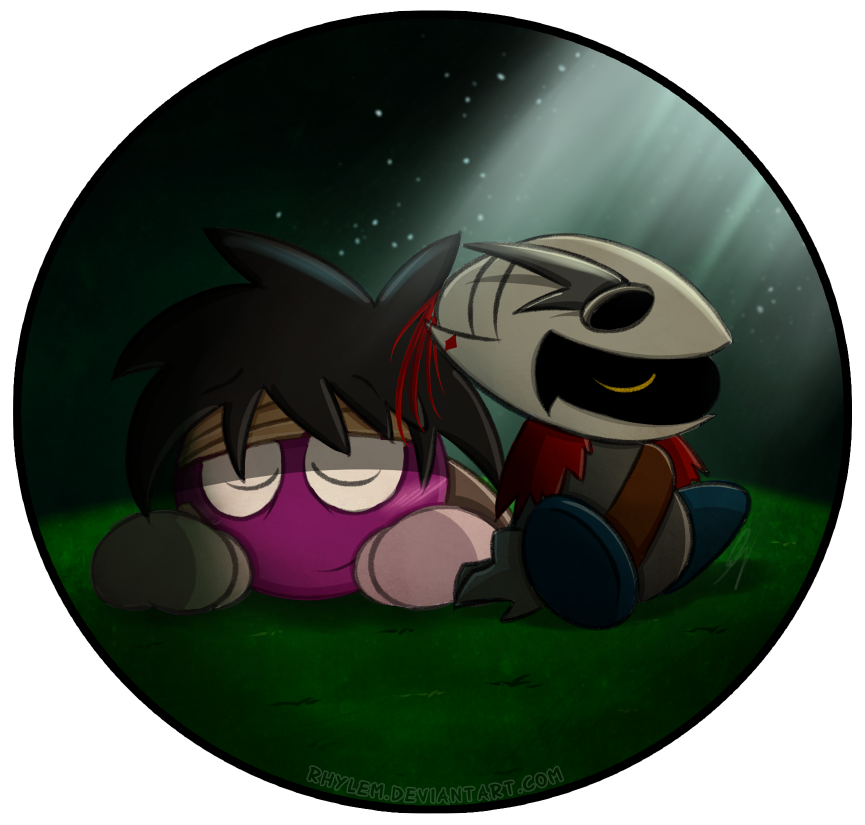 Ramset gave out a pompous laugh as he heard the word given to him.

"Whaaaat?!" Ramset's loud whines echoed throughout the forest of Kalmari. "But a few minuets ago you told me the number 4 was spelled f-o-u-r. All I needed to do is add the "-est" and I have forest."

"It doesn't quite work that way," Gravel explained, "Words that sound alike don't necessarily mean they're spelled the same."

The Sasuke, still confused, clutched his head in pain. "All these rules are giving me a headache. There's too many of them!" He sighed and rested himself on the soft grass under him. "Maybe we should stop for a bit...."

"Hm?" Gravel looked over to his friend and eyed the bandage wrapped around his head. He frowned a bit and hoped the surgery he recently had wasn't causing it.

It was only a few days after Ramset got an operation to have part of his hearing restored. Gravel was glad his friend could hear again, but was also slightly worried since he complained of constant headaches throughout the day. The truth is, Ramset was supposed to stay at the hospital for a week after the surgery, but because of him having major anxiety issues due to staying inside the walls of the hospital, he was released only after the 2nd day. Gravel took it upon himself to watch over him to make sure he'd be okay.

"Y'know, if you don't feel well, maybe you should go back and get examined." Gravel suggested. "The doctor did say you may need another operation."

"W-what?" Ramset smiled at his concerned friend, "No, I'm fine. It's just the studying that's causing it. That's why I told you we should stop."

Gravel let out a sigh, "It's not the studying that's causing it, Ramset."

"Seriously Ramset, stop being such a pest and let's go."

The Sasuke stood up and walked a few feet away from him. He softly mumbled something and stopped talking afterwards. Silence consumed the pair as not one dared to speak. After what seemed like an eternity, Gravel stood up and walked to where his friend was. He sat next to him and waited.

"Please....I don't want to go back." Ramset finally spoke, his voice trembling a bit, "I'll be okay, I promise."

Gravel's mask illuminated for awhile before it faded as he opened his eye. He grabbed the hand of his troubled friend and looked at him.

Ramset wiped the tears falling from his face and nodded. "You told me the same thing before I got my operation, and now I can hear again," He softly whispered, "Of course I do."

"Then please," Gravel pressed his helmet against his wrapped head, "Trust me again."

A wave of fearful emotions flooded the Sasuke as tears started to form in his eyes again. He hugged his friend and started crying.

"Then P-promise m-me..." Ramset spoke in between sobs. "P-promise me I'll still be able to hear the sound of your voice afterwards. I...I don't want to lose it."

"I promise." Gravel held his friend as he tried to prevent his own tears from falling. "You have my word, I won't let anything happen to you."

Ramset gave his friend a cheeky smile and spelled out the word for him.

Gravel let out a small laugh at his boisterous behavior just for spelling a word correctly. "Correct."

"Of course I'm correct," He boasted. The Sasuke lied down, tired from spending the whole day studying. He let out a yawn and closed his eyes. "One more," He softly mumbled.

Gravel thought a bit before coming up with another word.

A smiled formed on Ramset's face when he heard the word. He let out a soft giggle and nudged him before nodding off.