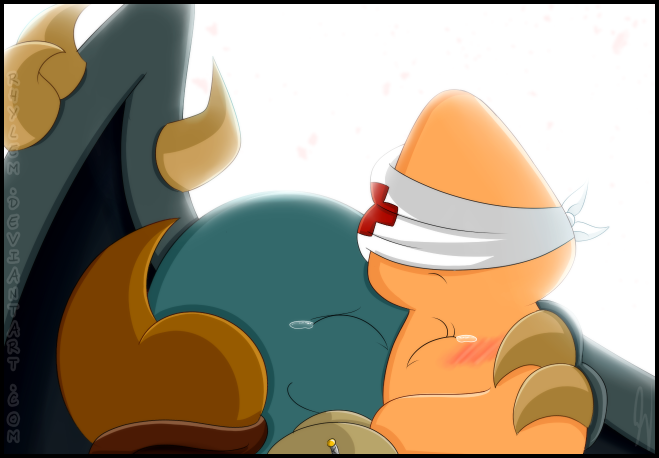 True Colors
Bate / Ellie
​
​
"Hey, I know you're a nurse and all, but do you really need to wear that headband when we go out?" Bate said as he started putting his pauldrons on. "Shouldn't you wear it, y'know...when you're at work, and not when we're going out for lunch?"

Ellie looked at the white cloth strapped on her mantle. She shrugged at his response and mocked his words.

"I know you're a Warrior and all, but do you really need to wear all that armor when we go out?" She went over and looked at her reflection on his newly polished mask, "Shouldn't you wear it, y'know...when you're on the battle field, and not when we're going out for lunch?"

"Oh, real mature, Ellie." The Puffball rolled his eyes from her childish response. "That's totally different, and you know it."

"It's very simple," He unstrapped his mask to reveal his innocent, totally not intimidating face. "No one will take me seriously if I'm not armored!" Bate looked at the mirror across from him and blushed in embarrassment. "Curse Nova for giving me such a harmless, adorable exterior."

It's been a few months after Bate's release from the hospital. Unfortunately, many of the Squishies who reside in Kalmari weren't too fond of him living there. They tend to harass and even threaten him at times when Ellie isn't around. He never bothered telling her about those incidents, however. He doesn't want to put her in harms way for defending him, so he covers them up with lies.

Anytime he got hurt, usually from getting stuff thrown at him, he'd make up an excuse about being clumsy or not paying attention. Anytime he'd encounter one of them in the presence of Ellie, he just tries to avoid them, telling her that they make fun and badger him, and that he doesn't want to deal with such a thing around her. He knew it was wrong, but he'd be damned if anyone put a hand on her because of him.

Looking back, he thinks the reason why they aren't going through with their major threats is because of his armor. It makes him looks intimidating, scary; like something you wouldn't want to mess with if you'd get in a physical fight. If they were to find out that a cute, squishy cream puff was under it all, he knew they'd have no trouble kicking the living crap out of him.

"I can't let them see me without it, Ellie." He sighed and touched his reflection. "At least when I'm wearing all of this stuff most of them tend to keep their mouth shut and avoid me instead."

"But that's not what you want either, don't you?" She looked into his eyes, "You want them to accept you...not fear you."

"Then how do you expect them to respect you if you're trying to be something you're not. Your armor doesn't represent who you really are." Ellie grabbed the mask from his hands. "You're not scary, and you shouldn't be ashamed of that. If they get to know the real you, then maybe they'll open up a bit more and want to talk to you."

"You make it seem like it's so easy, Ellie." He frowned a bit, recalling the memories of an encounter he had with a few Squishies a couple days back. "You're not like them, you don't judge from the outside like they do. Even if they were to see me without it.....that alone won't change their minds about me. To them, I'm different. In their eyes, I'm nothing but a filthy outsider."

"But you're not, are you? We'll both make them see that, Bate."  She grabbed the Puffball's hands. "We'll show them that you're no different then they are...in fact, you're even better than them. They should be learning a lesson from you." She hugged the warrior.

"Because even with all the abuse they put you through, you're still willing to stay here and let it happen....." She whispered.

Bate flinched when she said that.

The warrior looked at his friend, shocked.

Ellie nodded. "I'm not stupid, Bate. I know what they do to you. Why didn't you tell me?"

Bate looked away, ashamed. "I...I just didn't want you to get hurt. You and Alba are the only ones here who seem care. If something were to happen to you because of me....I wouldn't be able to forgive myself."

"You should've told me, Bate. Alba and I can take care of ourselves. It's you who needs the help, not us." She sat him down on one of the living room couches. She sat next to him and sighed.

"Bate...I'm sorry. I really didn't want any of this to happen. I didn't know that they'd react this bad. Kalmari wasn't always the way it was. We welcomed travelers near and far to stay with us. I guess, over time, we started becoming sheltered and blocked off everyone who looked different."

Ellie was truly ashamed of the behavior of the town. She couldn't understand why everyone was so guarded and abusive towards anyone who didn't resemble them. She wondered if she could really change the minds of citizens of Kalmari.

"It's been a long time since we had someone stay here and, well....I've enjoyed it." She smiled at her friend. "I really like having you hear Bate, but...I don't want you to suffer from their abuse because of me."

Bate glanced over and smiled back. "Ah, thanks Ellie. I really enjoy being here too, ah, well...just with you, anyways."

Both of them laughed a bit. Ellie saw Bate reach over to his shoulder and unhooked the strap of his pauldrons. He set them both on the table and looked at her.

"Ellie, I may not like how your town runs, but I do know I want to stay here. Not for them, but for you. And if that means I have to endure them until they accept me, then so be it. I trust you, and that alone is going to get me through this."

"Bate..." Ellie was lost for words. She never met anyone who'd do such a thing. Even after all he's been through, she could see the hope and determination in his eyes. He was different, he wasn't going to let anyone break him down. Instead, he was going to change them.

Maybe this town does have a chance....

Ellie embraced her friend and smiled.

"And I'll be right here, by your side, as we do this together."

​
"Tradition becomes our security, and when the mind is secure it is in decay."

​
Bate and Ellie are quite different. Never has an outsider stayed in the town of Kalmari for this long. Will they do the impossible and break the towns' chain of habit? Will they see what she sees in Bate?
Species © Nintendo/ HAL Laboratory
Interpreted characters created from said species © Rhylem