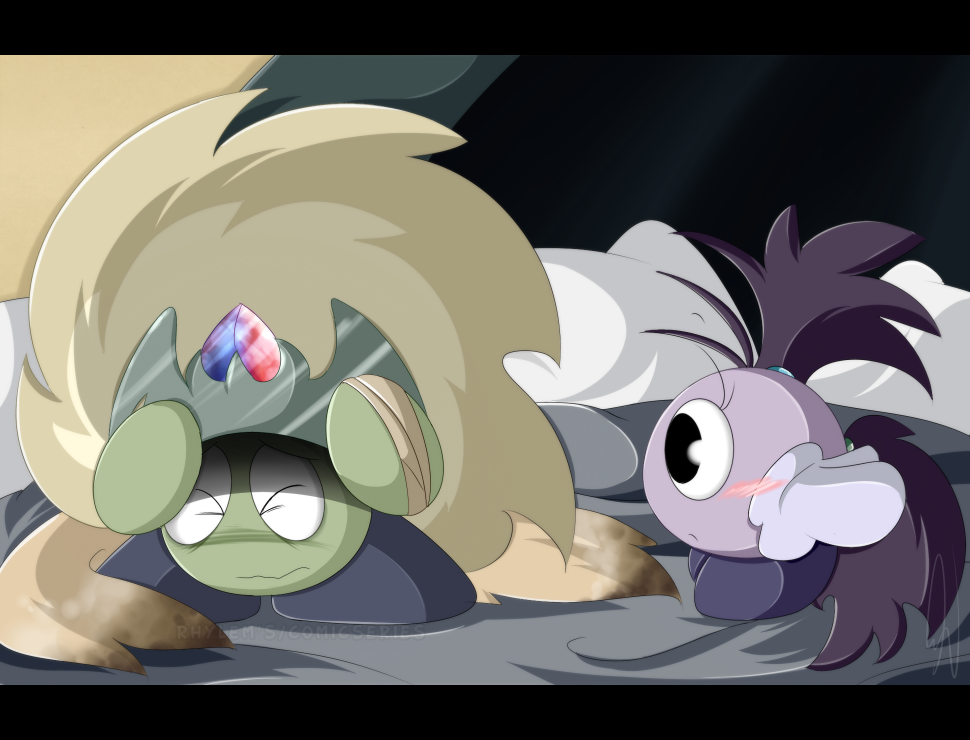 The Shy and the Curious
Atticus / Tula

​“I know it’s short notice, but…..” Falspar shyly glanced up at the elder when he presented their request to him.

Bate stared at the three patiently waiting for his answer. Usually he wouldn’t mind babysitting when one of his students asks, but....


“I’m currently watching Atticus for the weekend.” He said as he moved aside and pointed to the couch where he was resting. From Pyrell’s shoulder, Tula got a glance at the Leo before Bate closed the door.

“You know I would have no problem babysitting Tula, but Atticus was just released from the hospital last night and he’s still recovering. He's going to need my full attention for the next few days, so I would be unable to tend to Tula while watching over him.”

“I understand, Teacher Bate. It’s fine.” Falspar waved it off. “If I knew you were watching over Atti, I wouldn’t have asked or even knocked for that matter. I do hope he gets better, I honestly didn’t realize it took him that long to recover from his ability.”

“It’s usually never this bad, but seeing as he used his fire way past his limit, it’s going to take a few extra days for his body to heal.” He explained and faced Tula. “Maybe next time when he’s well enough, alright? I’m sure he’d love to meet the niece of the Guardian he helped save."

“It’s fine, Grandpa Bate, but…” She reached out and pointed to the door behind him, “You better go, then. I hear him calling you.”

“”Huh?” The elder paused for a second to hear his surroundings. He didn’t hear anyone calling him, but looked up when Pyrell started to speak.

“She has an extremely keen sense of hearing. If she says Atticus is calling you, most likely he really is. I’d open the door to check if he’s up.”

Bate cracked the door and peeked in. Sure enough he saw the small frame sitting up and quietly calling his name. He quickly turned around where he was greeted by a cheeky smile from her. A warm smile followed soon after from Bate, and he opened the door a bit more to let the others in. He figured a small visit wouldn’t hurt. It may even help Atticus since he’s never formally met them until this incident.

“O-oujiiii…..” Atticus tried his best to call out.

“I’m here, I’m here- Don’t worry.” Bate went over and sat next to him. He motioned the three over, and the trio took a seat on the couch across from them. Tula lightly tapped Pyrell and pointed to Attiucs when she noticed something they had in common.

“Very cool.” He returned the smile and watched as his ever so curious daughter wanting to get a better look. Bate noticed and gave his now timid grandson a small pat on the back.

“You have someone really special who wants to see you, Atticus.” Bate said as he looked at the Sasuke. Tula made her way towards the pair to properly meet the one who helped her and his uncle.

Although Atticus has become somewhat comfortable around most of his relatives, he’s only met Tula once….for an very brief moment, to be precise. The Leo slightly backed away when she got uncomfortably close and closed his eyes in fear. He used his hands to cover himself and fluffed up his wings a bit to slightly hide a small part of him.

“H-hey, I’m not gonna hurt you.” Her voice was low, and she kept her distance when she sensed how scared her cousin was. Even though she’s quite boisterous like Falspar and his Grandfather Ramset, she takes in her surroundings much better, and tends to take them into consideration. If someone was as scared like how Atticus was, she’d know it wasn’t the time to act foolish. Instead, she keeled down and quietly spoke to the Leo.

“I know you’re still recovering, but I just wanted to say thank you. If you and your dad didn’t come to help us that day, my Uncle Alto may not be here with us."

Atticus opened his eyes and lowered his hands once she finished. He expected her to start shouting or try hugging him in appreciation, but surprisingly she didn’t. He eventually took a seat  and turned towards the Sasuke. With an equally low voice he responded,

“Y-your welcome. I…ummm…” He slightly lifted his wings again to cover himself out of habit. “I’m glad I could help."

“You were really brave, and I hope one day when you’re feeling better I could get to know you a bit more. I don’t know much about you, but hopefully that could change…”

Tula knew he was still scared, so she decided to head back to her parents. Bate was quite astonished how well Tula was handling the situation. Usually his other cousins would constantly badger him, but in this case….


“That sounds like an excellent idea. I’m sure the two of you will get along just fine.” Bate said to Atticus and then added as he knew it’ll catch his attention, “Y’know, she’s able to breathe fire just like you."

And he was right. Atticus’ attention was quickly caught. “Huh?” He finally lowered his wings and looked at the Sasuke who was securely snugged between her parents. “Y…You can breathe fire?"

“Well….It’s not like how you or my daddy does it." She tried to explain it to him, “I use fuel stored in my body to help me. Ummm, but it only works when I have a source of fire, so I carry two torches on my hat. If I strike them on the ground, they light up like a giant match.”

Bate watched as Atticus crawled farther away from him and towards his cousin. The elder knew Atticus’ interest was piqued, so he didn’t speak and watched as his once intimidated grandson continue the conversation. Sweet Nova, he never expected him to come out of his shell this fast.

Little Atti and Tula meet. x) This takes place after the incident I hinted with Alto I posted this month. Arthur and Atticus were actually the ones who helped them, and the reason why Atti is still recovering since he used his fire to protect the lot. You also learn that Tula has very keen hearing. She's quite sensitive to her surroundings and is able to hear the slightest of sounds. >u<

Also- Falspar, Pyrell and Arthur have a very torn relationship, so they have not talked in years after leaving the GSA. It was only after Arthur saved their daughter and Alto did things start to slowly mend. So not only does Atti and Tula need to catch up, but so do the adults too. (There's a VERY important reason why they stopped talking, but that will be thoroughly explained later.) Though in a slight nutshell, Arthur is very ashamed of his past, and what he did to Pyrell and Falspar while he was leader. He figured they wanted nothing to do with him since he was responsible for the death of someone special to the pair, so he's done just that. Falspar was not only hurt, but extremely angry Arthur was avoiding them. After Dragato had to inform him that Petta was pregnant with Atticus, Falspar decided there was no reason to talk to his previous leader. If he never bother telling him something important like that, he probably doesn't want him in his, and his newly born son's life.