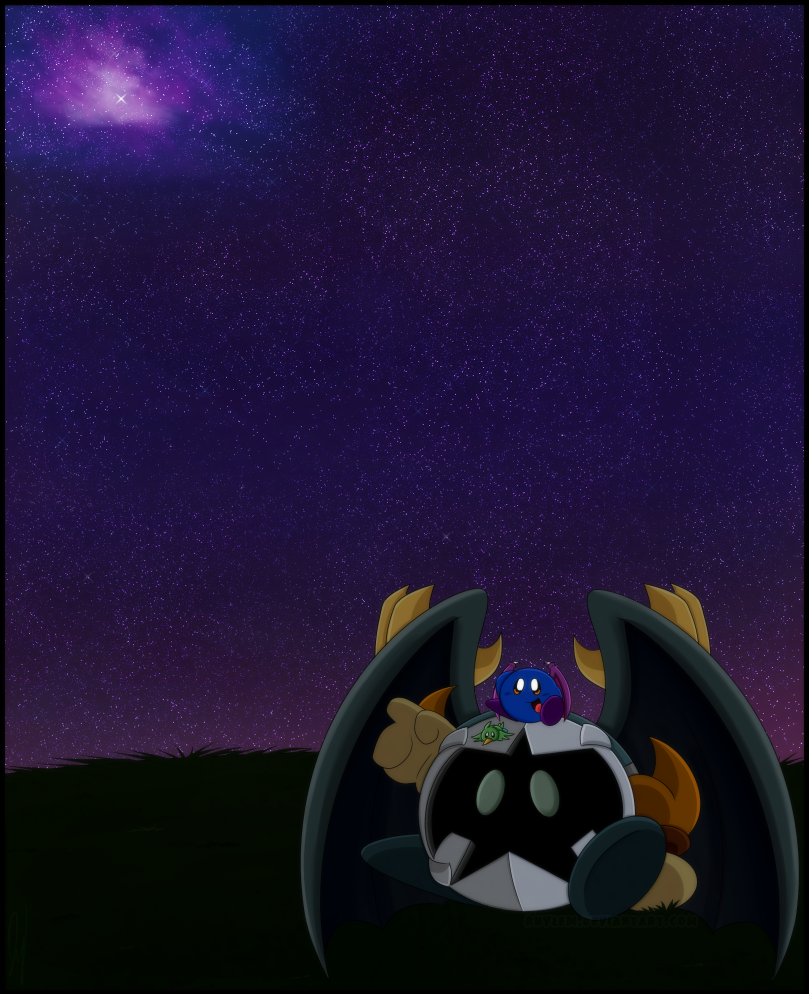 ​
It was another lazy day in Kalmari. The first day of summer quickly approached, and it was a tradition in Kalmari Town that everyone spends the day outside to celebrate it. Bate always preferred to spend the day away from all the festivities each year, but this year had different plans for him.

"Hey, Teacher, why are you all alone? Shouldn't you be celebrating with Teacher Gordon and Teacher Ramset?"

Bate didn't bother sitting up. Instead, he just opened his eyes and stared at the blue gumball in front of him. "I like to celebrate alone." He emphasized the 'alone' part, hoping his student would take the hint.

Of course, he didn't.

Meta smiled and sat right next to him. "Oh, okay..." He took a few licks of the popsicle he got from the celebration before waving it in front of Bate.

Bate glanced at the popsicle before giving his student a look of disgust. Fortunately, Meta couldn't see it since his face was hidden underneath his mask. He simply closed his eyes and mumbled a soft "no" to his student.

Meta shrugged and continued to eat.

Meta already knew from past experiences that he was listening, but it still bugged him that he doesn't talk. It was sort of a pet peeve to the tiny Puffball, but he knows he can't change the way his teacher acts.

"Can I ask you a question?"

"I wanna ask you a question about Kalmari."

'Kalmari?' Bate thought. This particular question piqued the older Puffball's interest. He sat up and faced his student. "What about Kalmari?"

"Well, are there other places like Kalmari? I mean...we can't be the only one in the universe, right?"

Bate pondered his question. "Of course we aren’t. There are hundreds of other planets that contain life." He looked at the sky. "But it's still noon, so I won't be able to show you until later."

"Wait...you're going to show me?" Meta got excited.

Bate mentally slapped himself. "When I mean 'show you', I mean you coming back in the next 2 hours when the stars come out."

Meta frowned. "But...but I have nothing to do!!!" He whined. Meta grabbed his teacher’s glove and started to tug on it. "C'mon, let’s go into town and eat. The stars will come out when we're done."

The elder lightly pushed Meta away and moved a few feet away from him. "I'm not hungry. Eat by yourself and come back when you're done."

The tiny Puffball shook his head. He realized whining about it probably wasn't the best way to get his teacher to listen. Thinking back, all he ever really does is whine when he's around. He sighed and sat in front of Bate. "Please, Teacher? I really want to spend the first summer with you."

Meta looked at him. "Why what?"

Bate flicked his head. "You know what I mean. Why do you want to spend the first summer with me?"

Meta glanced at his teacher and smiled. "It's because I don't like seeing you alone when the rest of the town is celebrating." He grabbed his teacher’s glove
again and started to pull him towards town. "Okay, I told you, so let's go."

Apparently Meta had other plans other than just eating. He dragged Bate all around town to celebrate with everyone else. He sat on his teachers head for a majority of the time....that is, unless he wanted to play one of the games the towns' folk had set up.


Bate sighed. At this point, he couldn't really do anything but to follow his student’s orders. He just hoped that the two hours will pass without anyone taking notice of a certain Puff happily sitting on his head.

"Teaaaacher!!!" Meta tapped his mask. "Head to your left, I see Arthur playing that game, and I wanna beat him!!!"


The two hours passed, and both Puffballs returned to the spot where they first met that day. Bate huffed and sat back down. "Eat? More like drag me all over town while everyone stared."

Meta nuzzled the stuffed bird plush his teacher won him. "But Teacher, didn't you like it?"

'I'm just glad it happens once a year'

Bate looked at the sky and pointed to the stars. "Alright, then, ready to start tonight’s lesson?"

Meta climbed on top of his head and nodded.

"It may be hard to grasp, Gumball, but there are hundreds of thousands of galaxies in the universe; each one of those galaxies containing millions of stars."

He pointed to a small cluster of stars above him. "If you look closely, you can see part of Gamble Galaxy from here."

"You mean that strange looking cloud?"

"Well, I guess that's one way to put it." He let out a light chuckle. The elder pointed to a bright star in the center of it. "Do you see the bright light in the middle?"

Meta looked at the sky and pointed to the star. "That one?"

Bate nodded. "Yes, that's the one. It's called Pop Star."

"Yes, it's a planet relatively similar to ours. I've never been there, but I've heard it's a wonderful place to live."

"Really?" Meta smiled down at his teacher. "Do you think I'll be able to visit Pop Star when I'm older?"

Bate pointed to another part in the sky. "And over there is another planet called Shiver Star. Its terrain is mostly Snow and ice."

For the next hour, Bate showed Meta all the different galaxies and planets located throughout the night sky. Meta was astounded that there were
hundreds of planets and life forms just like Kalmari.

Meta let out a soft yawn. "Thank you showing… me...all t-the diffrn...plnts...." He started to slur his words, trying his best to fight off the sleepiness consuming him.

​Bate grabbed the tiny puffball and held him in his hands. "You're welcome...." He stood up and headed towards his caretaker's home.

​"And thank you for spending the first summer with me." He softly whispered to the sleeping Puffball.