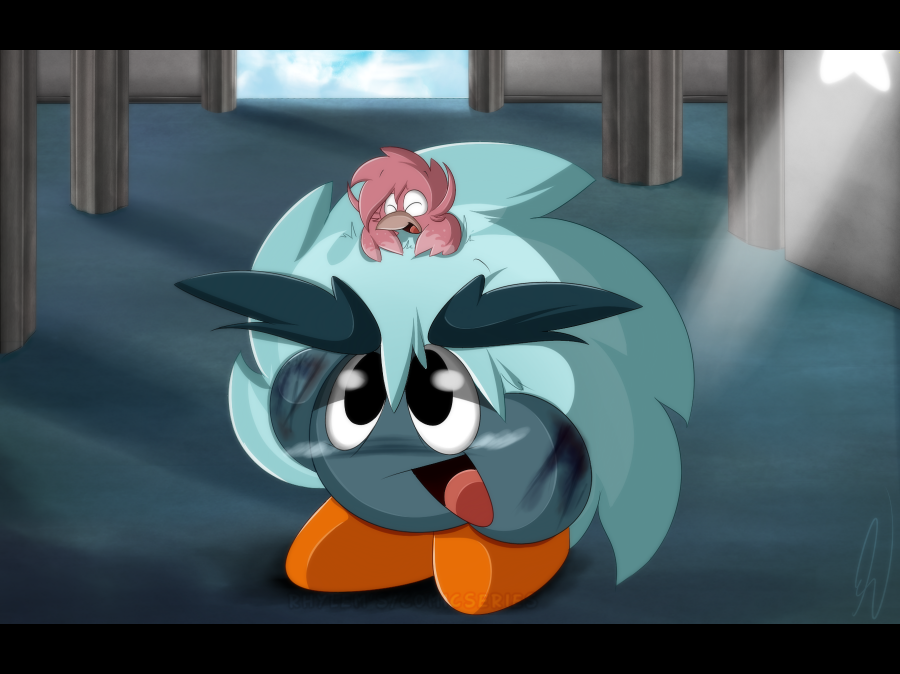 
​
“Pyrell, please settle down.” Bero gently placed a hand on his back to calm the eager child who was next to him.

“B-but..what’s taking so long? She said she’ll be back soon, and…it’s..umm…waaaay past soon.”

With a small laugh, the elder watched as Pyrell continued to anxiously wait for the other to return. He’s never seen him this excited for something before, and having him act, well…like an actual child was quite refreshing.

When Pyrell heard the soft sounds of footsteps echoing throughout the temple, the Leo couldn’t help but claps his hands in excitement. The large Sphere Doomer he was waiting for walked towards them; securely snugged in her wings was a small, pink Guardian . Pyrell tugged his mentor's shoulder and looked in awe when he saw her.

When he saw Bero nod, the toddler happily ran the to Doomer and held out his hands while slightly bouncing on his heels in anticipation. When she was safely secure in his arms, Pyrell smiled brightly at his new ‘friend.’

“O-oh…” The small bird hastily flapped out of Pyrell’s arms and stood in front of him. Pyrell watched as she stretched out her wings and bowed before him. “It’s an honor to meet you, Lord Pyrell. My name is Drani.”

Pyrell giggled from her formal behavior, and went over to pick her up once more. “You can just call me Pyrell.”

“It’s the duty of a Guardian to not only protect our masters, but to always be formal and welcoming when called upon.”

“Huh?” Pyrell scratched his head in confusion and just shook his head. “Well, we can do that later. For now, we’re friends.”

Drani looked back at the elder Guardian for support. Taking the hint, she carefully raised three of her eight tails and place them on the trio.

“You two will not be forming your bond just yet. I’ve been asked to let him take care, and raise you until the time comes. Drani, if your master requests such a thing, please do so with the upmost respect. Yes, you are his Guardian, but set your duties aside until it’s needed.”

“See?” Pyrell beamed and set her down. “We can do all that serious stuff later, but for now.” He gently tapped her beak and ran off to another part of the temple. “Try to see if you can catch me!”

Drani happily chirped and chased after him while the two elders watched.

“Thank you.” He eventually spoke. “Having someone other than myself will greatly help him. He’s…been through quite a rough week.”

“I understand. He is...quite different from the others in your clan, no?” She spoke, referring to his battered hands.

“Hm, yes.” Bero spoke, quietly observing his student when he began laughing at Drani for perching herself on his head. “That’s why I thought I’d train Drani as early as possible to help him. I won’t always be there for the boy, and without proper help, many will see him as the demon they portray our species as."

She gave a silent nod, knowing the legend he was referring to. “The condition exists in only a few after many, many generations have passed. I never thought I’d actually see a Leo with it, a Star Warrior no less.”

“Aah, his journey will be quite challenging indeed.” She spoke, as she understood what having the title of Star Warrior could do to ones mind and spirit. She knew these carefree happy moments were limited, and with a saddened smile, she decided to take her leave and let the three enjoy their calm before the storm.

“You may stay here for as long as you need. Please, make yourselves at home ” She spoke, retracting her tail and leaving the area.


“Pssst- Hey, Drani?” Pyrell quietly spoke as both looked out the rather large window to watch the stars while Bero was sleeping. It was late in the evening, and the pair was unable to sleep since it's not everyday you get to meet your other half.

“Yes?” She turned when he spoke, a warm smile on her face.

“Y-you’ll, ummmm...always be by my side, r-right?” He softly spoke, unsure if she’d really do such a thing.

A tired, relieved smile formed on the child's face, and reached over to gently hug his new companion. Even if the future was uncertain, having Drani by his side certainly makes it less terrifying. He knew he didn't have to fear being alone anymore. Maybe...everything was going to be okay, at least for a short while.

Please read below for my personal headcanon for Burning Leos and other tidbits about the legends.
​
​Theory #4  The Fire Demon known as Leos
Please read the following passage below that was taken from an unfinished story I was writing about Pyrell:

"It is said that on the hottest week of every year, a Leo’s temperature will rise to an extremely high, unbearable temperature. Effects causes the Leo not only to become unstable with their fire, but very dangerous as well. This has been proven false, to some degree. Over the centuries, many Leos are not effected by this surge of temperature and power anymore, and it is very uncommon for it to happen. There are a small handful, however, that still suffer from this unusual, mysterious condition."

Now, to understand what this means, I’ll have to talk about a character I never mentioned before. I only posted her concept which is here. (The center image)


This particular Leo is part of the story of the Legendary Three. As you can see, though, her hair is that of clouds, not fire. She was the wife of one of the brothers- Lord Kelderon, to be precise. They’re love was that like any other. Keldron would do anything to protect her, but unfortunately he failed when a demon known as Dark Matter ended up possessing her.

Because of the possession, her once bright, vivid hair changed into a mass of fiery flames. Kelderon tried everything to rescue her, but she ended up attacking with little to no mercy. As much as he didn’t want to fight, he had no choice as his once beloved wife was setting the very world they lived in to ash. Their Battle lasted not minutes, or hours, but 7 days. After much fighting in hopes to rescue her, Kelderon- with much, much tear shed and pain, ended up killing her.

From this day forward, any Leo born after this retains the fiery hair as a reminder of that day. The Surge of power exists in every Leo as well; lasting only a week, and dying off until next year. Over the generations, many do not have this Surge anymore, but there still a few who have.

​
Pyrell is one of the few who does. Because of this, he becomes extremely unstable and VERY violent. This is not due to his anger, but something he’s simply unable to control. There are times where be may be able to, but he has to physically hurt himself. (Which is why his arms are a bit battered. *Not counting the ones he received from his father later in the years) He constantly bites his hands to help control it, but most of the time it doesn’t work. Only another Leo, or his Guardian can withstand the flames and heat he gives off. Bero wanted to train Drani to help comfort and try to coax him during these times as it takes a huge toll on Pyrell. He becomes not only physically exhausted, but mentally as well.
Species © Nintendo/ HAL Laboratory
Interpreted characters created from said species © Rhylem