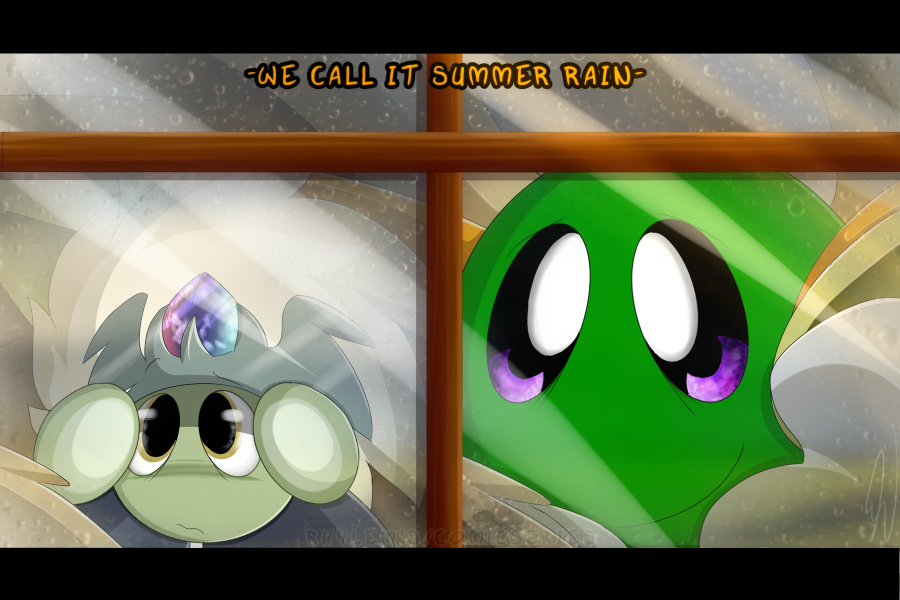 ​
Arthur watched as his son pressed both hands against the tiny window in the living room as rain continued to shower the small town of Kalmari. Atticus, although terrified of anything and everything water based, showed interest when it suddenly started to rain during the summer. While it was uncommon during these months, it does happen on rare occasions. This was the first time Atticus experienced such an oddity, and needless to say, he’s become extremely interested in it.

From the kitchen, Arthur mused from the sight of it all. He continued to watch as the little Leo proceed to tilt his head in bewilderment. His wings slightly perking once in a while when the rain would lightly tap the glass from a sudden breeze of wind. The old warrior couldn’t help but smile at his growing curiosity, so he eventually stood up to join him.

Atticus turned his attention to his dad with slight confusion in his eyes before glancing out the window again, “Why is it raining during the warm season?”

“It’s rare, but it happens. Here in Kalmari, we call it Summer Rain.”

Arthur gave a nod and leaned up against the window to get a better view of the rain. He pointed to the large clouds creeping over the horizons and started to lecture his son,

“Long, long ago, our founder- The Great Kalamar Kalmari, brought rain during the warm seasons when…..a fire broke loose and brought destruction throughout the land. They say when it rains during these times, it’s a reminder so the citizens won't forget the events of that tragic day.”

Atticus gave a frown and faced his dad again, “It…wasn’t because of a Leo, was it?” He asked, knowing they do have a rather poor reputation for causing fires.

“Nothing of the sort,” Arthur reassured and patted it head.

The little Leo slightly smiled upon hearing that and focused on the rain once more.

“Y’know….” Arthur started to speak up, “Summer Rain is quite special.”

“Hmhm~ It’s not like the rain during the Winter or Spring season. Wanna see why?”

“Yes!!” Atticus gave an eager nod, but quickly gave a terrified yelp when his father picked him up and started to head to the door. “W-wait!! D-Dad! Stop!!”

“It’s alright, son,” Arthur kept a firm grip on the squirming figure, and opened the door. The warm, crisp air welcomed the pair, and Arthur stepped out onto the porch where he set Atticus down. The Leo didn’t spare any time basking like his dad and darted back into the house,

“W-whoa, hold up,” Arthur extended his wing to stop him from entering. He didn’t bother budging when Atticus was pushing and shoving, and waited until he was tired out before picking him up again.

“It’s not going to hurt you, promise,” He calmly said, and took a small step into the rain. The Leo clutched onto him, and closed his eyes in fear when they left the safety umbrella of their porch. Any time he would get caught in the rain, he would always end up in the hospital because his temperature became too low for his body to properly function. The very thought of being sick again brought tears to his eyes, and he started to sob when his father wouldn’t listen to his pleas.

Atticus’ breathing hitched when he felt the droplets hit him, but…..

“Oh,” He eventually opened his eye and timidly held out his hand.

“It’s not cold….” Was all he managed to say as he looked up at his dad. Arthur gave a silent nod and placed him back onto the ground. The little Leo took a few steps away from the old warrior and gazed up at the clouds. He stuck out his tongue to catch the tiny droplets and gave a smile when he was perfectly okay after the fact. The trickles of water felt warm and quite enjoyable; nothing like how he previously experienced in the later seasons. His dad…..was right! This rain was special!!!

“Dad!!!” Atticus beamed and started to head further away from the house now knowing he wasn’t going to get sick, “I….I wanna play in the Summer Rain! Can I, please?!!!"

"Hm, of course," Arthur let out a small chuckle from the overwhelming excitement of Atticus actually wanting to play outside. He couldn't even remember the last time he heard him say such a thing. Oh- thank Nova for Summer Rain. Arthur made his way back to the porch, and watched from afar as his son happily played in a few puddles.

"Well, who would've guessed that I'd ever meet another Leo who enjoys the rain." Arthur suppressed his laughter, "I guess it runs in the family, hm?"
​
​​​​​​Artist Comment:

Father / son moment!!!! 8D I Felt fluffy, so I quickly drew and wrote a little something with Atticus. I also thought it would be cute to have him go out and actually play in the rain since he’s unable to do so in other seasons. I made up a little backstory about the rainy days during the summer in Kamari, sooooo…..Atti is now able to experience what it’s like to play in the rain without hurting himself. ^u^ It’s rare, but at lease he’s able to look forward to something when it happens. <33

On a side note: The reason why Arthur hesitated when he was explaining Summer Rain was because of the one who caused the fire. He does not want to expose his son to such darkness of the world just yet.....
Species © Nintendo/ HAL Laboratory
Interpreted characters created from said species © Rhylem