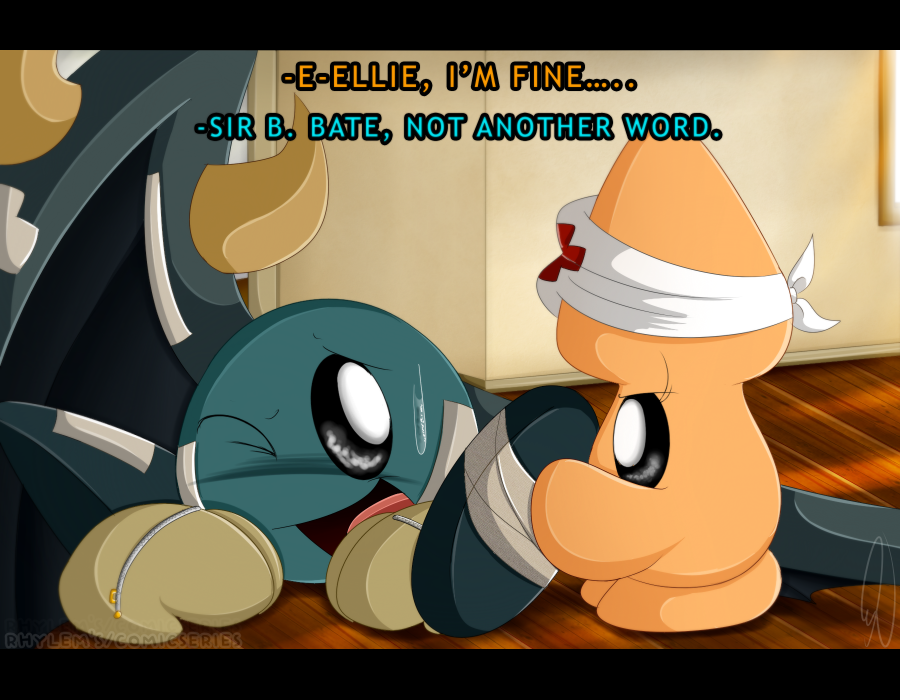 ​
​​Ellie stood shell shocked when both figures entered the home. Her husband, covered in cuts and bruises, gave her a weak smile before collapsing on the ground in exhaustion. She looked him over in concern before glaring up at the Gordo next to him.

“I......” He started to hesitate, and shyly rubbed the back of his head. “I guess we went a little overboard?”

“Overboard?” She stated and pointed to the blood covered Puff on the floor. “More like an overkill. Gordon, what in sweet Nova?!!!”

“I know, I know. I.....I’m sorry.” He frowned when he saw how concerned Ellie became. He summoned several of his hands and lifted the tired Puff so she’d be able to tend to his wounds.

“E-Ellie, I’m fine....” Bate slightly winced while she began wrapping one of his many injuries.

“Sir B. Bate, not another word.” She hushed and went over to scrub his wings. “I don’t want to hear any excuses from you."
​
The Puff couldn’t help but chuckle from the current situation he was placed in. “I was just brushing up on my battle techniques. What if a Demon Beast attacks us or something?"

“That doesn’t require Gordon to beat you to a bloody pulp, mind you.” She bit back.

Bate yelped out in pain, but tried his best to keep a smile on his face for her. “Y-yes, I understand, dear. We, ah...tend not to pay attention when we spar. That’s just how we were trained in North Nov-Ooooouch!!!”

Bate flinched when she pressed the alcohol soaked gauze on his wing. He knew she did that on purpose to silence him.

Maybe staying quiet for now was for the best.
​

I felt like drawing my two silly lovebirds, so I quickly doodled something up for the occasion. >u<
Species © Nintendo/ HAL Laboratory
Interpreted characters created from said species © Rhylem