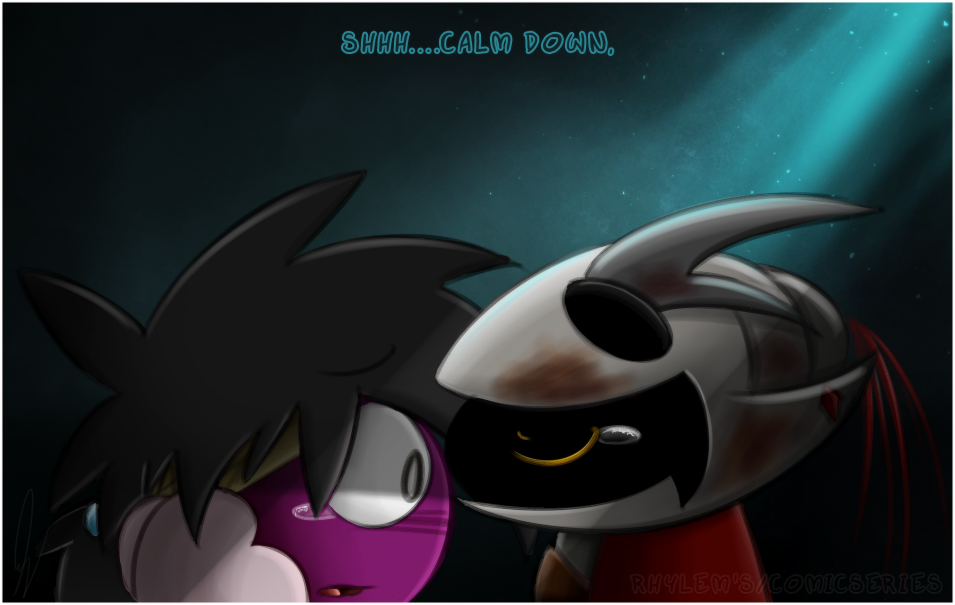 Ramset, who was currently staying inside an open cavern located west of Kalmari Town, continued to tap the mask of the figure sleeping next to him. He recently moved in with Gravel a few months back, after much hesitation on Grav's part, since the Sasuke had no where else to go. This thrilled him. Not only did he finally have a home, he had a friend to share it with too! Ramset, who was quite fascinated with the little cave Gravel calls his home, did noticed it lacked something essential he needed- food. To be more precise, Ramset ate all the food Gravel bought and tried to get him up when he ran out a few days back. He let out a small whine when his friend didn’t respond.

Ramset looked outside and let out a defeated sigh when the lights of the store started shutting off. He figured he wouldn’t wake up due to the weather. It was still winter where they live and Gravel hibernates until the temperature is better suited for his body. He didn’t quite understand it, but waits by his side like any good friend should. Gravel tries his hardest to get up when Ramset calls for him, though it may take hours or even days for him to wake. He made sure to give Ramset everything he needed before he went to sleep, but unfortunately the winter season decided to stay much longer this year.

Ramset frowned when all the lights in the plaza was off and nudged Gravel a bit harder. “Graveeeeeel! I’m hungry! There’s no food left.”

Gravel, who’s been pestered by Ramset for hours upon hours finally broke free from his slumber and woke. It took him quite a bit to get adjusted before eying the Sasuke next to him.

Ramset beamed when he heard his voice and hugged his tired friend. “Grav, you’re sleeping forever. When’s this hibernation thingy going to end?”

The Bukiset wobbled a bit from the hug and gently pushed him back. “S….soon…”

Ramset sat across from him and smiled. “That’s good…I…ummm, kinda ran out of food while waiting."


“Ah…a few days back.” He clutched his stomach in hunger.

Hearing that completely shook Gravel from his sleep. “R..Ramset,” He glared at him, “I told you to go to the market and buy food when you run out. Don’t wait for me.”

Gravel rolled his eye in frustration. “I told you before I went to sleep that I put the money in the….ck….hnd-…nd…..if…y…eed….okay?”

Ramset just stared at him, completely confused. He had absolutely no idea what he said just now. “What? Could you repeat that?”

“G-Gravel,” Ramset spoke, “I think hibernating is effecting your speech, I don’t understand what you’re saying.”

Ramset saw how worried Gravel became when he said that. Gravel forced himself up and headed towards him. He felt his friend clutch on to the side of his head for a few seconds before sitting down again.


“Huh?” Ramset tilted his head in confusion, “What in Nova are you saying, Grav?”

Fear suddenly set in when Gravel’s voice became softer and softer until he ultimately was unable to hear his voice anymore. He called out to his friend but covered his mouth in shock when he realized he couldn’t even hear the sound of his own voice. It wasn’t Gravel, it was him.

Ramset lifted a shaky hand and touched the device he recently got to help restore part of his hearing. Tears formed in his eyes as his worst nightmare became a reality again.

His heart was racing as he started to panic. He couldn’t bear the thought of losing every sound, every voice and every whisper he’s heard since he arrived in Kalmari. Just knowing he’d lose it all, especially the sound of Gravel's voice, was enough to bring him to his knees. The now trembling Sasuke hugged himself and started to sob.

Gravel watched as his friend had a complete meltdown from the loss of his hearing. He mentally cursed since he knew the stores were closed to replaced the drained battery for his implant. He figured Ramset had no idea what was happening since it was the first time his battery died. Gravel was usually the one to replace it before it runs out, but since he was hibernating.....

“Gravel, you idiot,” He mumbled to himself. Although sleep was desperately calling for him, he tried his best to shake it off to go comfort his frantic friend.

“Ramset,” He held his hand, and pressed his helmet against his head- knowing that gesture usually settles him “Shhhh....calm down.”

Although it fell on deaf ears, Gravel could sense Ramset starting to calm himself. Ramset looked at his friend, petrified.

The Bukiset gently grabbed the device strapped to Ramset’s head and took out the batteries to show him. The Sasuke reached out to grab the small, circular objects in his hands to inspect it.

Using his only hand, Gravel tried his very best to explain what happened. Although his expressions were vague and he had little to no knowledge in sign language, he saw Ramset give him a nod.

Gravel then got up and headed to a lone, ruby pillar where he was originally burrowed next to. He pulled out a small box from behind and handed it to Ramset. The Sasuke slowly lifted the cover and pulled out a bag of coins from within.

“Go to the plaza tomorrow,” Gravel explained, and pointed to the batteries.

“O-oh…okay.” He softly said and set both items down. He wiped his tears and gave a small smile to his friend. Gravel knew he understood now.

“You’re going to be okay, Ramset,” He hugged his friend as his helmet started to glow. He pulled back a few minutes later when Ramset took his hand and led him to where Gravel was sleeping. The Bukiset looked at him, concerned.

Ramset knew he was telling him if he was going to be okay until morning. Being a bit hungry and temporarily losing his hearing wasn’t going to stop him; he knew he could trust what his friend was saying- or in this case, explaining. Ram then gave his comrade one of his cheeky smiles to reassure him.

Knowing Ramset was back to his old self, the Bukiset let out a tired yawn and started burrowing. “Goodnight Ram,” He looked at Ramset one last time before closing his eyes. A small, soft whisper of his name was the last thing he heard before drifting off to sleep.