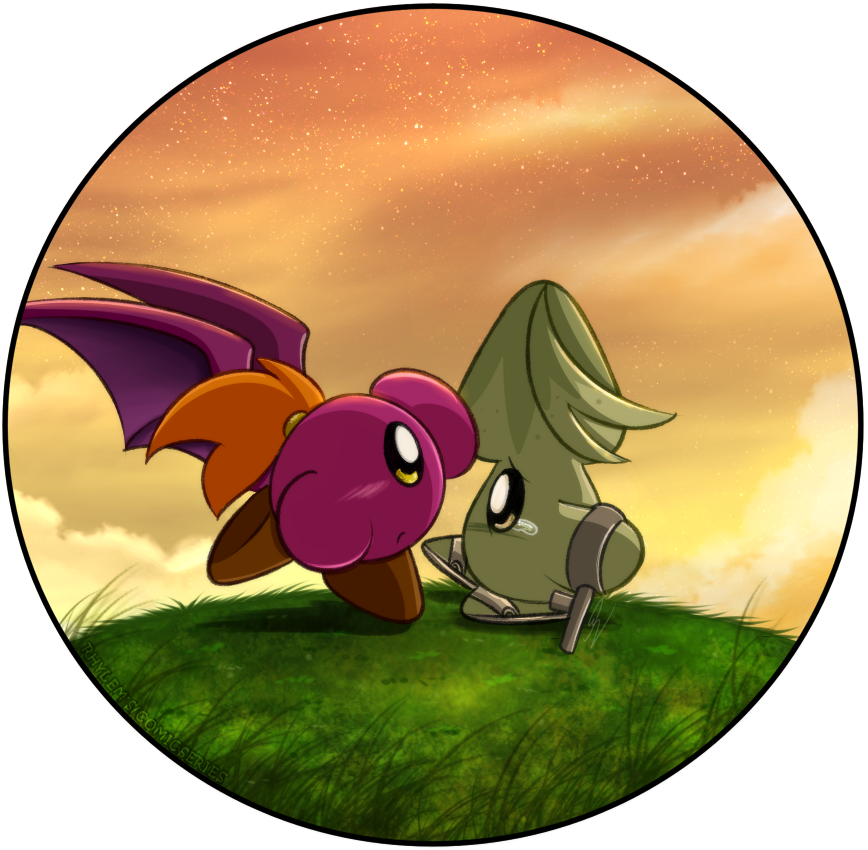 Cite fell back in surprise when he saw the little Puffball standing right in front of him. He quickly picked himself up and started to panic. For the past few days he’s been living here, this particular Puffball has always been popping up out of nowhere to greet him. Cite couldn’t understand why he kept doing it, and the Puff's behavior was starting to make him paranoid anytime he’d leave his home.

Dragato noticed how scared he started to become so he decided to speak up again. “Cite, was it? You’re the one always hanging out with Teacher Bate.”

Cite didn’t speak, but nervously gave a small nod. Dragato smiled and went towards him, “He’s the one who introduced me to you a few days back, remember?”

“I…I d-don’t r-remember....” He lied, trying to end the conversation as quickly as possible. He backed up some more when he saw that Dragato was getting uncomfortably close to him.

“Oh,” Dragato said, “Well, I’m sure you remember me from the last ten or so encounters, right?”

Dragato didn’t reply back this time, and instead, reached out and touched the Squishie’s mantle. Something about the way Cite talked caught his attention, so he wanted to see if he was right before asking him.

Cite froze when he saw Dragato place his hand in the middle of his mantle. He tried to back up, but Dragato kept moving forward every time he did so. Eventually, the little warrior removed his hand and looked at Cite, confused.

“Ummmm....are you cold or something?” He said after a minute of staring at him.

“Oh, ummm…it’s just that you’re talking kinda, well….strange.” He said,  “It sounds like you’re shivering, so I find it odd you’d be cold in this type of weather. Do you need a scarf or something?”

A light green blush formed on Cite’s cheeks, and he used one of his hands to cover his mouth in embarrassment. He knew it was a mistake talking to him- it was only a matter of time until someone in this town made fun of the way he talked. He looked at Dragato one last time, tears now forming in his eyes, before turning around and leaving.

“H-hey, wait!” Dragato said, running up to him when he started to leave all of a sudden. He grabbed his shoulder, but let go when Cite quickly pulled back in retaliation.

“N-no you’re n…n-n-not.” Cite shook his head and continued to walk away, “N…n-now stop following m…m-me and l..l-leave me alone.”

Dragato just stood there and watched him leave. He had absolutely no idea what just happened. How could something so simple turn out to be a total disaster? The little warrior decided to talk to the only one he knew in Kalmari who knows more about Cite than he did.

Dragato slowly kept near the sleeping Puffball. Although he was told by Ramset to never wake him up, he saw Meta do it multiple times without being scolded so he assumed Bate would do the same….he hoped. He reached out and gingerly tapped his mask and called out again.

“Teacher Bate, could you get up?”

“Dragato, please stop tapping my mask, I heard you the first time.” Bate gently pushed the tiny warrior away from his face. The elder let out a tired yawn and sat up to talk to his previous student.

“Yes, what is it?” He slightly lifted his mask and covered his mouth when he let out another yawn. “I didn’t expect you to be visiting this hour.”

“U-ummmm…” He pulled out a small gift from behind his back and placed it in front of Bate. “Here, could you give this to Cite? I don’t think he likes me very much, so I thought you could give it to him instead.”

“Hm?” Bate picked up the small gift box and gently shook it before turning back to Dragato. “That’s very kind of you, Dragato. If you don’t mind me asking, do you think you could tell me what you got him?

“A….scarf?” Bate questioned. He took a look at his surroundings and scratched his head in confusion. “Ah, ummm….it’s nice that you bought him something, but I don’t think he’ll be needing a scarf since we’re in the middle of summer.”

Dragato shook his head, “That’s what I thought too, but I noticed he’s always, ummm….shivering when he talks. I thought giving him one as a gift would make him forgive me. I don’t know why, but he started crying and told me to…..leave him alone.”

“Oh, Dragato…” He let out a sigh and handed him back the box. “He’s not shivering, please don’t tell me you told him that when you talked to him.”

“I did, why?” Dragato said, not knowing that was the reason Cite started crying in the first place.

Bate motioned Dragato to sit next to him, which he did. The elder didn’t think Dragato would say something that’ll make Cite unintentionally cry. In retrospect, he probably should’ve seen it coming. Dragato’s never been around someone who stutters before, and assumed the environment was causing him to speak that way. He looked at Dragato and started to give the clueless warrior an explanation.

“Cite isn’t shivering, he’s stuttering.” He explained, “He suffers from a speech disorder that disrupts the way he talks. He repeats certain words or letters when he speaks. Cite gets really embarrassed and tries to avoid talking to others because of it.”

“O-oh…” Dragato frowned when Bate told him that. “I…I didn’t know, honest!” He looked at the gift next to him and cringed when he imagined what the outcome could’ve been if he had given him that scarf.

​“I know you didn’t, it was just a misunderstanding.”

“But now he hates me because of it…” He lowered his wings in shame.

Bate placed a hand on the warrior’s head to ease his troubles. “Cite isn’t the type to hate someone. I’m sure he’s just hurt since he thought you were making fun of the way he talks. If you apologize and explain what happened, I’m sure he’ll be more than happy to forgive you.”

“Do you really think so?” He said, not sure if a simple apology would fix such a large mess.

“I know so,” He reassured. “Though you should probably wait until tomorrow. I don’t think he’s planning on leaving his home for the rest of the day.”

Dragato nodded and stood up to head back to his home as well. “Thank you, Teacher Bate.”

​Bate gave a silent nod and returned back to his late, afternoon nap.


The next day, Dragato quickly went to the store to pick up some art supplies to make Cite an apology card. He thought it would be much better than just flat out saying it. Unfortunately, he ran out of most of his supplies and had to wait until the store opened the next day. Dragato swiftly ran to the lane to pick up what he needed but froze when he saw Cite in the same isle. He tried his best to back away without being seen, but ended up knocking quite a few items off one of the shelves. It caused a rather large ruckus throughout the store, which Cite noticed.

Dragato immediately saw how terrified Cite was when he saw him. The little Squishy started to back away, but Dragato frantically called out.

He saw Cite stop moving, so he continued to say whatever it took to gain his forgiveness.

“I didn’t know, I swear! I would never have said that to you if I knew. Please, give me another chance.”

Cite was unsure if he was being truthful or not. Every time he accepts someone’s apology- no matter how convincing, they end up breaking it and hurt him even more. He didn’t believe Dragato was any different from the others back in his hometown, so he started to back away again.

When Dragato saw him leaving, he tried to think of anything that would calm him. “W-wait, don’t leave!” He took a step forward and said the first thing he thought would catch his attention.

“Teacher Bate wouldn’t have introduced you to me if he knew I was going to hurt you. Y…You trust him, don’t you?”

He perked a bit when he saw that Cite’s attention was caught,

“Then please....” Dragato stepped closer, “Forgive me. I talked to him yesterday and I….ummm…..” He looked away in embarrassment, “He told me why you left. It’s my fault, I didn’t know you stuttered or what stuttering even was in the first place. I…didn’t mean what I said, I honestly thought you were cold…and…”

Dragato gave a small smile and sheepishly looked up at him, “It’ll mean a whole lot if you gave me another chance….please?”

Cite focused on the floor and nervously started fiddling with his hands. He didn’t want another repeat of his old town, but at the same time- he trusts Bate. When Dragato brought him up, he knew he’d always be able to take the elder’s word with full confidence and not a shred of hesitation. He glanced up and saw Dragato anxiously waiting for him to speak, and with a small, but very weary smile, he accepted his apology.

“O-okay….I forgive you…” He softly spoke.

He watched as Dragato beam in excitement, his wings slightly flapping in pure bliss. The little Puff started to run towards him but accidentally tripped from all the fallen items he dropped when he first got here. He let out a small yelp and Cite took a few steps forward to help him.

“M-maybe we s-should pick up all these items, then celebrate l-later…?” He suggested,

Dragato gave an embarrassed nod and started to put all the various art supplies back in their original spot. As both of them started to tidy up the isle,
Dragato decided to make small talk to his new friend.

“So, ummm…it’s a bit of a coincidence we bumped into one another today. Could I ask what you were doing here?”

“I was j-just looking at t…t-the art sup....s-supplies the s-store had.” He placed the jar of paint back on the shelf and picked up a few others around him, “I like to d-draw.”

Dragato quickly looked up when he said that, “Really?” He beamed, “Me too!!” The little Warrior, now knowing he had something they could relate to, started asking him everything about the subject.

“Huh, I knew that voice sounded familiar.” A gruff voice said from behind.

The pair looked over and saw Bate. He bent down and picked up the last jar of paint Dragato spilled. “You’re quite loud, Dragato…it reminds me of a certain Sasuke.”

The little Puffball gave a cheeky smile and rubbed the back of his head from the statement. Meanwhile, Cite went over to give the elder a hug, which he returned.

“I see you two are friends now?” He asked Cite.

“W-we are.” He replied, going back the magenta Puff. Bate smiled upon hearing that, glad that Cite was able to find someone his own age to play with.

“C’mon, Cite!” Dragato grabbed his hand and lead him out of the isle. “I wanna show you all my drawings!”

“O-oh….alright!” He gave a small wave to the elder and followed Dragato.

Bate mused as he watched the pair laughing and smiling as they left the market. He softly whispered to himself as he began to take his leave once they left,