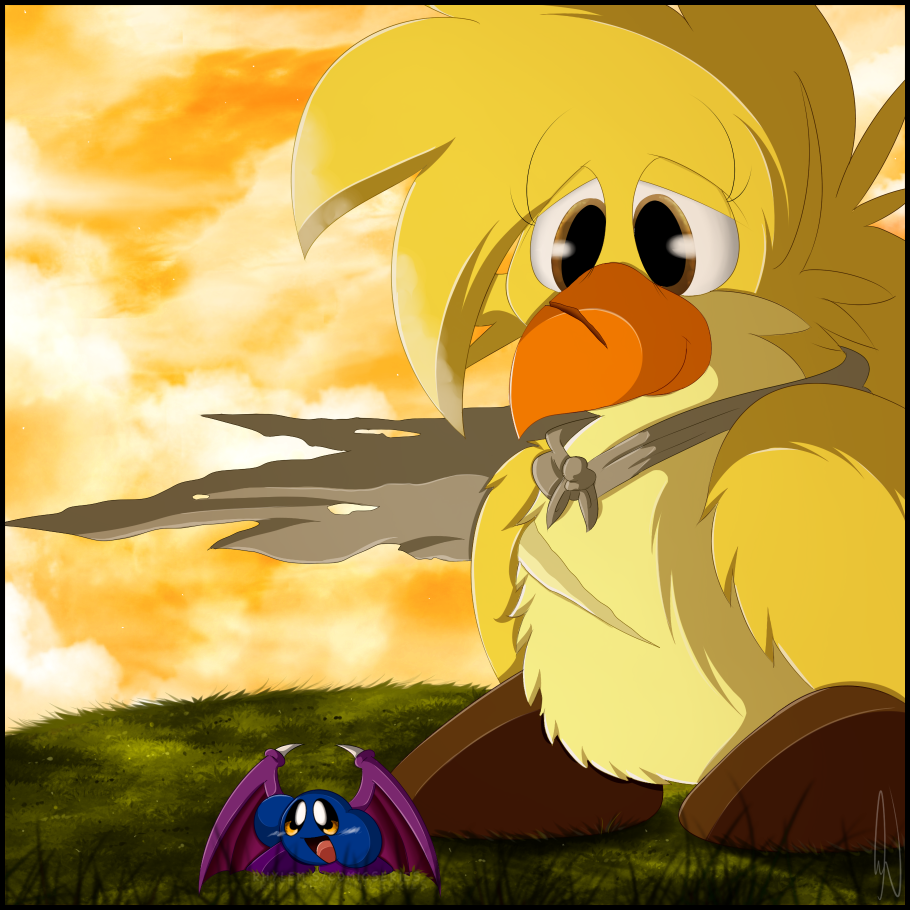 ​
"Excuse me, could you please tell me if I'm in the right place?"

Meta, who was patiently waiting for his comrades, turned around and faced the rather large bird who was standing next to him. Meta cautiously backed up as he never seen this particular bird before, but lowered his guard, however, once he got a good look at her. Although her height almost matched that of his mentor, he could clearly tell she was quite old and frail. Meta moved a few steps towards her since all she probably needed was directions.

"Sure, I can help! What place are you looking for?" He spoke in a cheery manner.

She gave a warm smile to the child, and looked around the unfamiliar area. "I would like to know if this is the Town of Kalmari."

Meta noticed how excited she seemed to be after hearing that. The elder bird took a seat to lower herself to his level, and closed her eyes as she was quite tired from her travels.

"I am so glad to hear that. I've been traveling for a long time searching for this place." She eventually opened her eyes and looked at the small warrior. "Maybe you can help me find someone. You see, he greatly reminds me of you."

"H-huh?" Meta certainly doesn't recall any of his comrades ever befriending a giant bird. Then again, if she's been looking for this place for a long time, perhaps it wasn't their friend, but someone else who looked like them.

"Hey, what about Teacher!” Meta thought, and looked at the bird when he spoke. "Maybe he's the one you're looking for. He lives here, AND he looks just like me...just older."

"Oh?" Her attention was quickly caught, and she spoke once more in anticipation. "Please tell me, is.....his name..." She paused for a moment as the realization that the one she's finally looking for may come to an end. With a shaky breath, she finally spoke the name of the one she longed to see. "Bate?"

"Yup!" Meta nodded, not knowing how much of importance this was to her. "I think he's sleeping, though, but if you're a friend of his, I'm sure he'll wake up! C'mon, follow me!"

As she tried to hold back her tears, the bird eagerly followed the Puff. She didn't speak a word, but picked up the pace when his house finally became visible. Meta ran to the door, and told her to wait outside while he got him.


"A bird?" Bate repeated as he sat up and tiredly got out of bed. "And she said she knew me?"

"Yes!" Meta nodded and tried to push him out of bed faster. "She knew your name, and she told me she's been looking for you for a long time!"

"Uhhh...." The elder shyly scratched his head when nothing familiar came up. He put on his armor as he proceeded to head out to see who this mysterious bird was. With Meta by his side, Bate looked at him as he opened the door.

"This better not be another one of your little pranks to get me to-" As Bate looked up, the warrior stood shell-shocked when he saw who was standing in front of him. The warrior lifted up his mask to make sure his eyes weren't deceiving him.


After all these years?


"So, Teacher, do you remember now?" Meta joked when Bate stopped mid sentence, but immediately looked on in concern when he saw his teacher crying. He silently watched as Bate stumbled forward to the figure. The bird, who was also teary eyed, called out to the Puff as she mimicked his movement and took a step forward as well.

"My, look how much you've grown." Her voice trembled as her journey finally came to an end. She unfolded her wings when they got in close range, and hugged the other.